We slept in this morning, which was such a nice change. Our big duffle bag wasn’t being picked up, so there was no need for us to get it downstairs before 8 am. Luxury!

On our way to breakfast we met the people we had talked to at Tré-le-Champ. We chatted for a short while and then headed into the breakfast room. Hotel Richemond has a nice spread of food, so it was easy to pick out what we wanted to eat. After breakfast we headed back upstairs to do some laundry and hang it in the bathroom to dry.

But we still had unfinished TMB business. We needed to get to Les Houches to complete the loop. Officially that meant getting up to Brévent and then walking down, with 1500 meters elevation loss, to Les Houches.

But we had already decided not to do that. Our version of the walk started off through the streets of Chamonix and headed south into the suburbs. We followed the streets to where our map showed a trail going up to the Petit Balcon Sud. But there was no trail visible there and no sign, only private property.

A tranquil lake, with ruined chapel, near Chamonix

So we carried on and came to a river promenade along the river Arve, which would take us to Les Houches. This we ended up walking along. The route was quite rolling but had no big ups or downs. A lot of it was in the forest, which kept the temperature down. We passed by some lakes and rock-climbing places, both natural and man-made. They were very busy with people of all ages learning to climb. 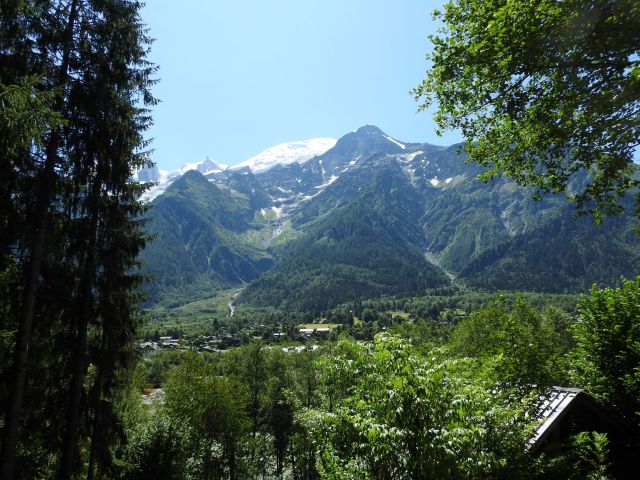 Mont Blanc from the road near Les Houches

After not too long the road emerged from the forest into Les Houches, right by the railway station. We checked out the bakery where we had bought houchards the last time we were here, but they didn’t have any savoury pastries so we decided to look elsewhere. We walked down the main road but nothing caught our fancy.

The official start and finish of the TMB

We ended up at the Bellevue gondola (which had been our starting point 11 days ago) and noticed a small café across the street which had sandwiches. So we went in and sat on their back terrace and had a light lunch.

Our start and finish of the TMB

We headed back to Chamonix on the bus, using our hotel card for a free ride. Paul needed some new hiking pants, having torn his on the first day, and Rosemary needed hiking socks. There were a lot of sports stores to choose from but finally we found a pair of pants which weren’t too expensive and which actually fit. Although they would need to be shortened. Rosemary never did find any satisfactory socks.

At 6:30 pm we went out to check out restaurants. At first we thought about going back to Le Bivouac, but just along the street from it was a restaurant, La Moraine, which had lovely hanging baskets outside. They advertised a set menu for €24 which looked good and had some interesting choices. Paul had blueberry-flavoured beer, which he wouldn’t order again, and Rosemary had lemonade from the same company. She said it tasted like Sprite, but maybe it’s hard to make lemonade which doesn’t taste like Sprite.

Both of us had the ham and melon starter; Rosemary had beef with frites and a salad followed by lemon mousse, and Paul had a fish dish accompanied by rice followed by crème fraîche with a blueberry sauce. The meal was really tasty and extremely good value. During dinner it started raining quite heavily but by the time we were finished the rain had stopped.