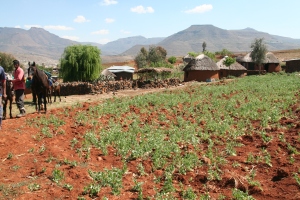 Our 2006 Vacation in Southern Africa

Last year we went to Southern Africa for our annual vacation, and we enjoyed it very much. So we decided to return in 2006. We liked the group tour experience, so we found an 11-day hiking tour through Lesotho and the Drakensberg mountains run by the British adventure travel company Explore Worldwide. But we really wanted to spend more than just two weeks in Southern Africa, if only because of the time it takes to fly there from Vancouver. So we decided to rent a car and drive ourselves around to see the sights like Kruger National Park.

In 2005 we had flown KLM from Vancouver via Amsterdam to Southern Africa, and that worked very well. But this year KLM had changed their schedule, so instead of a two-hour connection in Amsterdam, we would have to overnight in Amsterdam. And Cathay Pacific had a deal that was cheaper than KLM and didn’t require any overnight stopovers. Only problem was, it went via Hong Kong and involved 27 hours of flying each way instead of 21 hours. But it was a deal, and it was a new experience too.

After we arrived in Johannesburg, the Explore tour started the very next day. When it finished, we got our rental car and drove to Kruger Park, where we spent six days. Then we toured the Blyde River Canyon area for a couple of days, and finally drove via Swaziland to the St. Lucia area on the Indian Ocean coast.

The first day in Johannesburg, the morning was taken up with administration and in the afternoon we went on a tour of Soweto. The next day we left for the trek in Lesotho.

Pictures from Johannesburg and its environs

Lesotho and the Drakensberg

Our first base in Lesotho was Malealea Lodge, from where we went on a four-day trek through the mountains. During the day we walked up and down 3000-metre passes and at night we stayed in thatched huts in roadless Basotho villages. Horses carried most of our equipment and we carried day packs.

Pictures from Malealea and the trek

After the trek we spent a long day driving across the entire width of Lesotho, ending up at the Sani Top Chalet, whose chief claim to fame is that it is the highest pub in Southern Africa. We spent a day there, then drove down the notorious Sani Pass into South Africa, where we spent a few days hiking in the Drakensberg Mountains.

Pictures from Lesotho and Sani Pass

Pictures from the Drakensberg Mountains

And now for something completely different. The tour was over and we were on our own in a rental car. First we spent six days driving around Kruger National Park looking for wildlife. There was plenty of that there: it is traditional to look for the Big Five, which are Lion, Leopard, Cape Buffalo, Elephant, Rhinoceros. And we found all of them, within a 24-hour period. But besides them we saw smaller mammals like hyenas and mongooses, and 106 species of birds.

Pictures of mammals in Kruger Park

Pictures of birds in Kruger Park

Pictures of other creatures in Kruger Park

We went for a drive to see the spectacular Blyde River Canyon. We based ourselves for two nights at Trackers Mountain Lodge near Hoedspruit, and spent a full day driving a large loop past all of the canyon sights.

While researching South Africa we had got one of those coffee-table picture books out of the library, and for some reason the pictures of the St. Lucia region on the coast of the Indian Ocean attracted our attention. Despite all the reports of there having been years of drought there, and of the rivers and estuary drying up, we decided to put the area on our itinerary. And while we were there, we would drive around the Hluhluwe-Imfolozi Game Reserve.

And Swaziland was between the Blyde River and St. Lucia. We didn’t really have any reason why we should go through Swaziland, and there were a few reasons why we shouldn’t, but we decided to go through it because it was there.

Pictures on the way home

Copyright ©2006 by Rosemary and Paul Clapham