We spent a couple of days in the small town of Bijagua, visiting the Volcán Tenorio national park and the Rio Celeste.

We left Caño Negro very early in the morning, because we weren’t sure whether the “midday” bus would actually get us to Upala in time to catch the bus from there to Bijagua. So as a result we arrived in Bijagua at about 10 am. On the way from Upala our bus was stopped at a police roadblock, where the police officers wanted to see everyone’s personal documents. The officer looked at Paul’s passport and said something in rapid Spanish. He was pointing at the visa stamp which said “1 May 2012 Glasgow”. When we pointed to the Costa Rica visa stamp, which was on a different page, he said “Disculpe (Excuse me)” and continued down the bus. 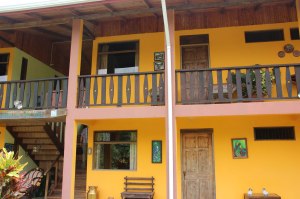 Our hotel was Hotel Cacao, a budget hotel which was off the main road. We spent the afternoon sitting on the balcony watching birds flitting around the garden, and surprisingly by the time the first rainstorm rolled in we had seen nearly 30 species of birds. In a break between rainstorms we went up to the soda which was one block away for dinner. The food was cheap and plentiful, and this time our casados had heart of palm as well as the usual rice, beans, and chicken. 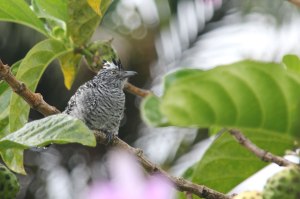 We got up fairly early this morning and for one brief moment the summit of Volcán Miravalles was visible. But then the clouds came down and that was the end of that.

The hotel manager had arranged to get us a ride to Volcán Tenorio National Park. He knew a guy who would drive us there and back for $26 US. A very good deal we thought. The scheduled pickup time, 8:30 am, came and went and there was no driver. The manager called him to remind him, and we eventually left at 9 am, which was fine with us. The driving distance was only about 11 km but in the smoke-spewing old Isuzu Trooper it took 45 minutes. The road was very bumpy and quite steep in places. Along the way our driver, Wilfredo, stopped and pointed out various things. First there were howler monkeys in a tree beside the road, and then there were sweet lemon plantations, coffee plantations, and some of the higher-priced lodges we had decided not to stay at.

Once at the park we arranged to be picked up at 2 pm. We paid our park entrance fee ($10 US each) and headed into the park. We were on a popular hiking trail which leads to the Rio Celeste, so called because “celeste” means “sky blue” in Spanish. The first bit was on a very nice paved trail, and then we came to a construction area where they were building a new bridge over a ravine. Since it wasn’t complete yet, we went down into the ravine and back up the other side. After this the trail became a bit more muddy and rooty.

The first point of interest was the waterfall, where the Rio Celeste plunges over a 10-metre drop into a sky-blue lake. This required going down a set of 253 concrete steps. Today was a bit cloudy, but still the river lived up to all the photos we had seen. An amazing blue colour! We stayed at the bottom for a while, taking photos, and then climbed back up the 253 steps and continued along the trail.

Next stop was the mirador, but the view of Volcán Tenorio was obscured by clouds so we carried on along the trail. Soon we came to bubbling water with a distinctive sulphur smell. This was an underwater fumarole which was labelled “Borbollones” in Spanish. 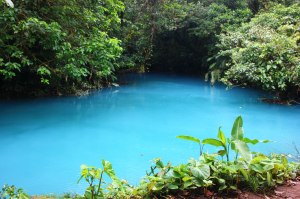 After we crossed a couple of rickety suspension bridges, we came to the place where two ordinary-looking streams came together to form the sky-blue Rio Celeste, which was an interesting effect. This was the end of our walk, so we retraced the trail to our entrance. The trail was becoming increasingly busy, and when we got back to the parking log we found that a big tour bus had made it up the rough road.

It was now about 1 pm, so we went across the road to a “Comida Rapida” place and bought something to drink. We sat the tables there and ate our lunch. Wilfredo arrived on time to pick us up, which was good. Retracing our route back to town he showed us a large group of oropendola nests and then he stopped and said “There’s a toucan”. How he could hear it calling over the noise of the car’s engine we don’t know, but after we looked for it for a while, suddenly it flew out of its hiding place and came towards us, landing in a tree right next to the road where we could see it perfectly.

During all of this time there was no rain, so we had had good luck with the weather.