We arrived in Caño Negro late in the afternoon, after a complicated bus trip from Arenal which took us most of the day, and checked into our hotel, the Caño Negro Natural Lodge. It wasn’t very busy. In fact as near as we could tell, we were the only guests in the hotel.

The town was very small, only about two blocks square, so our walk around it didn’t take very long. There are maybe 300 people in the area, with three restaurants and one small grocery. In the centre of the village was a plaza with a bandstand, and there was a police station next to it. 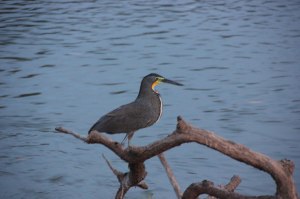 Down by the river there was a little lagoon with egrets and jacanas, and in the river a variety of water birds including a Bare-throated Tiger-Heron, along with a caiman. There was also a marshy pond with Roseate Spoonbills and Wood Storks and other water birds, but it was quickly getting dark so we returned to the hotel.

After dinner it was clear outside and the stars were shining brightly for the first time since we had arrived in Costa Rica.

We had booked a boat tour from the hotel this morning, and after breakfast we met our guide, Jimmy. Together we walked down the road to the dock. He apologized for not speaking very good English, but really it was good enough, it was easy to converse with him. And he certainly knew his birds.

Down at the dock he fetched the hotel’s boat, we got in, and off we went up the river (which originates near Volcan Tenorio). The ride was slow and leisurely, as he pointed out the birds and animals along the way. There were lots of water birds like herons and anhingas, and the number of kingfishers was amazing. And it was nice having him all to ourselves. Originally the tour was supposed to last two hours, but he extended it to three hours, visiting two different lagoons. Including the walks between the hotel and the dock, we saw 53 species of birds. Not to mention dozens of caimans, turtles, iguanas, and even a crocodile.

After lunch we walked over to the town square. Jimmy had told us there was going to be a fiesta there tomorrow, and sure enough there were a couple of men there sweeping up the leaves and pulling up the weeds. We were interested to see if there were buses going to Upala in the middle of the day, since the bus schedules we had seen didn’t seem to be very reliable. 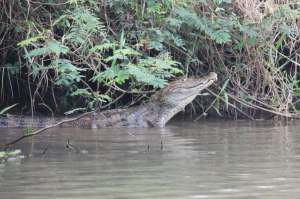 Later in the afternoon we decided to walk over to the river, to see if there were more spoonbills there today. It turned out that there was only one spoonbill there, but a lot of Wood Storks. We did see two different species of woodpeckers, though, Hoffman’s and Lineated. The most interesting thing: there was a small herd of cattle in the field, and we noticed that one Brahmin cow had a calf which had been born only a short time earlier. She was licking the calf to clean it up, and from time to time the calf tried to get to its feet, but it kept flopping down again. It was a large calf, so the mother had a lot of cleaning to do, and after a while a vulture dropped in to help with the cleanup. We watched for about half an hour, but it was getting dark, so we had to leave without knowing the outcome. But we’ll have a look tomorrow. 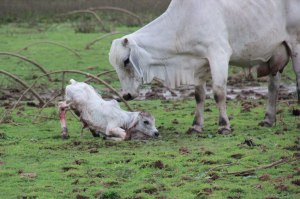 Today we had no tours scheduled, so we got up, had our breakfast, and then headed down to the river. In the trees right next to the reserve entrance we saw a Variegated Squirrel, a species we hadn’t seen before. But we were interested in how the little calf was getting on. At first we didn’t see any cattle, but just at that moment the rancher rode out on his horse, bringing the herd back into the meadow. There were several calves, but we could recognize “ours” because it was the smallest and shakiest. For some odd reason we felt like proud grandparents! 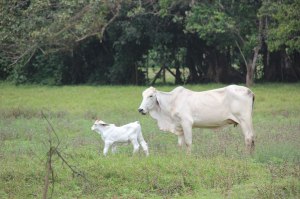 We explored the path up-river from the dock, which only went a short distance before it was overgrown by bushes. But near the end we noticed some bird guano dotting the leaves on the ground, so we looked up and found a pair of Black-crowned Night-Herons roosting in the tree directly above us.

On the way back to the hotel for the lunch we stopped by the old wooden shack where an old woman makes her living by selling agua pipa, a drink made from the juice of coconuts, for 200 colones (about 40 cents) a drink. We weren’t sure what to expect, but in fact she had a refrigerator which contained little plastic bags of agua pipa tied with a knot at the top. Before giving them to us she washed the bags under the tap, probably because the usual way to drink the contents is to pinch off a corner of the bag and squeeze the juice directly into your mouth.

After lunch we walked around the hotel property. At the back there was a small patch of trees, and there were monkeys crashing through the branches. When we tracked them down we found they were Spider Monkeys. They were very interesting to watch because some of their poses were very human-like.

Since it was very hot today, we decided to have a swim in the hotel pool. It was cool and refreshing, and it was fun to float around watching to birds flying around the garden. Up to now in our travels we have almost never stayed in a place with a swimming pool, so this was a new activity for us.