Today we were heading out on the road-trip portion of our tour, so we were up at 6:45 am to get packed. Next stop: Trinidad. Our departure time was set for 8:30 am; our bus had 24 seats for 14 passengers, quite comfortable seats, but more importantly it had air conditioning! Next stop: Trinidad. So we headed out of Havana on the national highway.

The highway took us through the middle of the country for a while, and then we turned off onto a smaller road. In Australia we made our first stop, only to buy sandwiches for lunch. Our choices were ham, cheese, tomatoes, or any combination!

The road took us into “Bay of Pigs” country. That was an important turning point in Cuba’s history and there was a lot of evidence of it still, including large signs celebrating victory over the US’s proxy invaders.

We stopped at Cueva de los Peces, a place where it was possible to swim in a cenote, a pool made by the collapse of the ceiling of an underground river. Along with Ruth we sat on a lava rock to eat our sandwich and watch the wildlife, including several lizards. There were a few birds in the trees which were hard to see, but at the back of the restaurant there was a small flock of Blue-headed Quail Doves. Very pretty birds. After lunch we walked across the road to see the bay, where several people were snorkelling in quite choppy water. 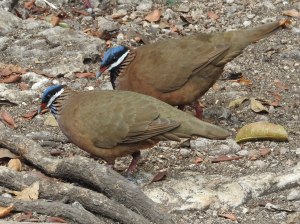 We left there at 1 pm to travel just a short way down the road, to Playa Girón and its museum, which was all about the invasion. The museum displays were all in Spanish but José took us through it and did the explanation. It seemed that the Cubans were poor and not well-armed, but the invaders were not well-organized and the Americans were ambivalent about supporting them properly. Our visit was quite short, so soon we were on our way to Cienfuegos to do a brief tour of the main square. 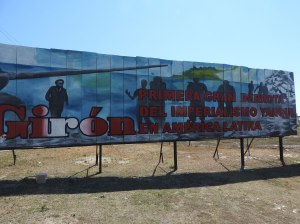 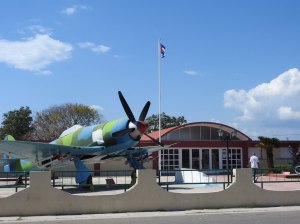 Cienfuegos is a UNESCO World Heritage city, and it’s beautifully painted and restored. The central square, Plaza José Martí, was surrounded by several arts organization buildings in French or Italian colonial style, including the Teatro Tomás Terry. The city hall had been freshly painted but the police stationed outside it wouldn’t let us in, perhaps because Paul was wearing sandals. 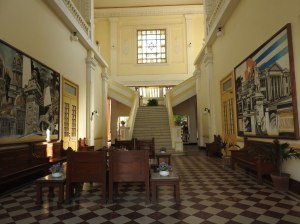 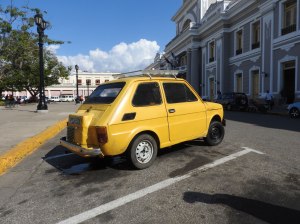 The day was really hot by now so getting back onto the air-conditioned bus was a relief. We now had an hour and a half drive to Trinidad, which would be our home for the next two nights. We would be staying in a casa particulare, which meant the house of a Cuban family. The bus dropped us off shortly after 5 pm at Hostal Emiliana y Martin, along with Ruth and São. We had a room with a double bed and plenty of time to settle in. The place was a bit noisy, though, because they had a 3-year-old boy. 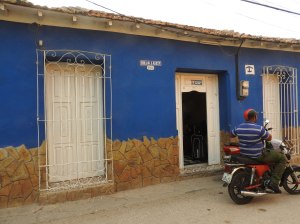 For dinner tonight we were eating at the casa, so we could have a true Cuban meal. First course was soup, which was maybe a kind of pea soup. Next was chicken for Rosemary and fish for Paul and Ruth, accompanied by rice, chips, and mashed-up corn. (São had been sick since arriving in Cuba and was still not eating.) On the side we had a plate of tomatoes, cucumbers, and shredded kohlrabi. Dessert was flan. All very tasty and definitely lots of food.

At 9 pm José came by and picked us up with the bus; our destination was the open-air Casa Musica, which is located about the Plaza Mayor. Every night there is a band playing there, and there’s the option of going up the wide staircase to the dance area (where the action is) or staying in the main square. The band played for about 20 minutes without stopping for each set, and the dancers were spinning and bouncing the whole time. We stayed to listen for about an hour before heading back down the hill.

Today we had the whole day in Trinidad. The alarm went off at 6:45 am, but we had time to lounge as breakfast wasn’t until 7:30 am. The bus came by at 8:45 am and took all of us over to Parque Céspedes to begin our walking tour of the city. 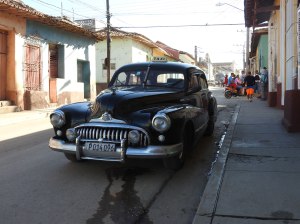 We walked up a residential street, General Linu Perez, which was a very ordinary street. We passed by a small school, where José explained the education system in Cuba. And then we stopped at a ration shop, or “bodega”; every Cuban gets a monthly ration book which allows them to buy a certain amount of staples (rice, beans, sugar, eggs, etc.) at a very low price. One could possibly survive on this ration. The book expires at the end of the month, so people were using their coupons up today before they expired. 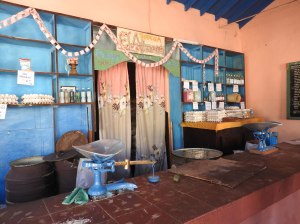 José also told us how employment works in Cuba—most people work for the state, but recently more private businesses have been allowed to open. For example our casa particulare operator, Emiliana, was trained as a doctor. So it seems that she can make more money opening her house to paying guests rather than being a state-employed doctor. 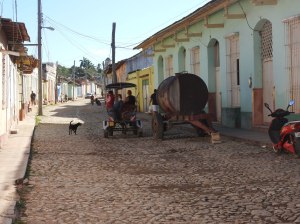 The street at this time of the morning was quite empty, so we were able to take lots of pictures of the old cars and colourful houses. At the end of the street was the Iglesia de Santa Ana, which had been partially destroyed by a hurricane in 1812. Outside the church had been the old slave market, and José told us about how slavery had worked in Cuba. 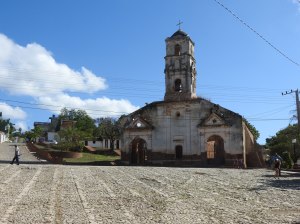 Then we walked uphill towards Plaza Mayor, but first we passed through a craft market. Naturally we had to buy something, we had lots of money! This area is known for its pulled-thread work on table cloths, so Rosemary bought one table runner and one small table cloth, for 15 CUCs. Also at this market she bought a small purse which had been crocheted incorporating pull-tabs from beer cans. An unusual way of recycling them! 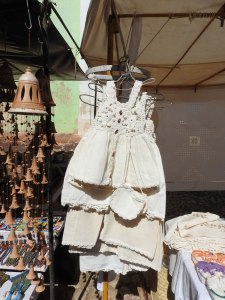 Our next stop was Plaza Mayor, where José pointed out all the fancy houses and gave us a brief history of each. We then continued around the next block to end up near the Museo de Historia, which was the end of our walking tour. 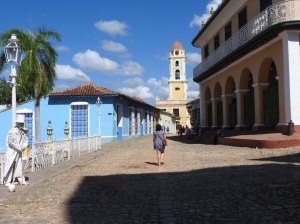 After José told us about the optional activities for this afternoon we went in to see the museum, which housed furniture from colonial times along with some regular exhibits about Marxist politicians. The mansion dates from the late 1820’s and it displays furniture, beautiful glassware, and figurines all in neo-classical style. We also saw our first hummingbird, the Cuban Emerald, which was flitting around the flowers in the inner courtyard. There was a tower in the museum, so we climbed to the top, fortunately just before the bus tours poured in, and there was a great view over the city and down to the Caribbean. 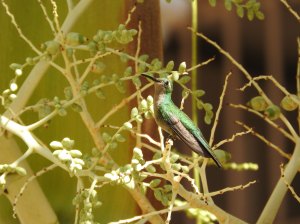 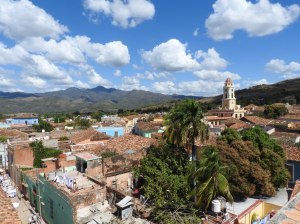 By now it was getting close to noon, so we headed over to the area where banks could be found, so that Ruth could change some money. And not a moment too soon, it was the last day of the month and they were closing early! But she did manage to squeeze in at the last minute. 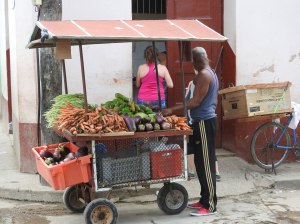 We had lunch at a panaderia named Dulcinea; besides finishing our leftover sandwiches from breakfast we tried some fancy pastries, which were very tasty (and inexpensive).

After lunch we walked back to Parque Céspedes to meet up with José; he was leading the trip to the beach, and we didn’t want to go to the beach but we did need to find out tonight’s dinner arrangements. We chatted away for quite a while before he arrived with some of the group who had gone for salsa lessons. We found out that we would be picked up at 7 pm, so off we went for a walk. 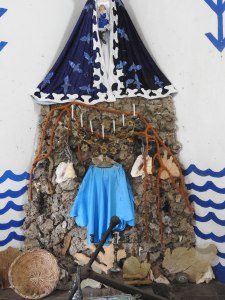 This time we were going to be following a walk described in the Lonely Planet book. Back at Plaza Mayor we headed past a Santería temple and the Antiguo Convento San Francisco de Asis and onward to the outskirts of Trinidad, the Barrio Tres Cruces. The houses here were definitely not as fancy or as big, and the cobbled roads were in much poorer state. Outside several of the houses there were horses tethered, and we saw a couple of men wearing short rubber boots with spurs attached! The whole walk was only about 2 km in length, so we were soon back near Plaza Mayor. 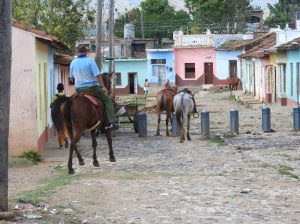 We had a few hours before dinner, so we headed back to our casa to do some laundry. At 7 pm we went out to the corner to meet up with José and the others. Tonight was going to be a group dinner at a local family-run restaurant; as it happened it was very close to our casa so José just walked down the hill to get us. The restaurant was named La Ceiba, after the huge ceiba tree which towers over the tables. It was very busy and in order to reach the table you walk through the owner’s house. 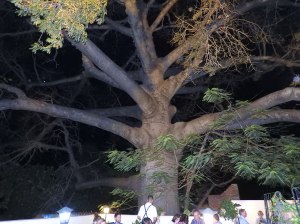 This was the first time the whole group had dined together, so we met people whose names we didn’t know yet. In the spirit of “When in Cuba drink rum cocktails” Rosemary ordered a mojito and Paul tried a canchánchara, which is a Trinidad specialty. The mojito was stronger in the rum department then the ones we had made ourselves in Havana, and the canchánchara was honey-based and not nearly as strong as it smelled. 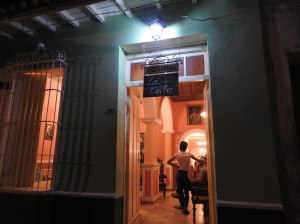 The menu was quite extensive, and Rosemary ordered the house special, honey lemon chicken. But when the food arrived, it was quite shambolic. We were to find out that the normal procedure in Cuban restaurants was for the waiter to bring a plate and ask “Who ordered the chicken?” This works fine when the menu has only one chicken dish but when there are several chicken dishes it doesn’t work. Eventually everybody got a dish which contained something like what they had ordered, but Rosemary didn’t get honey lemon chicken and she wasn’t the only one to get the wrong plate. But everything was really good and no one minded too much.