Today was really the day for nailing down our accommodations. So after packing up our bags we went to the same restaurant where we’d had breakfast yesterday, and then we headed over to the Tourist Information centre. There we burned up several gigabytes of their wi-fi until we finally found a place in Annecy which was both available and not priced out of this world. Between the two of us we finally settled on a hotel which was close to both the railway station and the old part of the town. That took care of July 9 and 10.

Next up was Sion in Switzerland, another recommendation from a forum post. We couldn’t find much there so eventually we settled for the YHA. That would be for July 11 and 12, after which we would resume our regularly-scheduled vacation.

On the way to the bus station

That all took quite a while, so by the time we got over to the Chamonix bus station, the next bus to Courmayeur would be at 12:30 pm. That was fine with us, though. Our journey would take us through the Mont Blanc Tunnel, which was completed in 1965. The tunnel is 11.6 kilometres long and goes directly below the Aiguille du Midi. The whole trip took about half an hour, including lining up to pay the toll (apparently €159 for our bus!) and then driving the regulated speed of 70 kilometres per hour through the tunnel. We also had to stay at least 150 metres behind the vehicle in front; that rule probably came from the devastating fire in 1999 which burned for over 48 hours without stopping and killed about 40 people.

Once out of the tunnel and into Italy, it was only a short drive down the hill to Courmayeur, which is indeed in Italy despite its French name. The houses there are sturdy-looking stone structures with wooden shutters and heavy-duty slate roofs. From the bus station we easily found Hotel Crampon and were soon in our lovely third-floor corner room with a balcony. Great views from our windows in two directions made this one of the nicest places we have stayed at. And the bathroom had plenty of towels, which was good because we had laundry to do.

After the laundry the next step was to go to the Tourist Information centre to get some information on local hiking trails. Nothing really started in Courmayeur but they told us of two possible areas to go to which involved a short bus ride. Hopefully tomorrow’s weather will be as good as today’s! 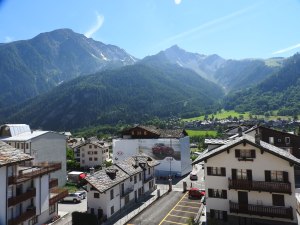 We went for a walk around the town, which is quite small and definitely not as touristy as Chamonix on the other side of Mont Blanc. There were nowhere near 100 restaurants, and a good number of the restaurants in town specialized in pizza. We were in Italy after all. So we decided to buy a take-away pizza and a small bottle of wine and sit on our balcony to have dinner. We had purchased some salad and tomatoes to augment our pizza, so we had a good feast.

After a lovely sleep we got up and headed down to the breakfast room. Wow, what a great selection of food to choose from! By far the best of the trip. Once we were done we went back up to our room and got ready for our outing.

We had decided to walk to Lac Combal, since that seemed to be a fairly simple walk which wouldn’t stress Rosemary’s knee too much. So we walked down the hill to the bus station and bought return tickets to La Visaille, which was at the end of the line in Val Veny. There were only a few passengers and the others all got off at the Santuario Notre-Dame de Guérison, so we were the only two going to La Visaille. 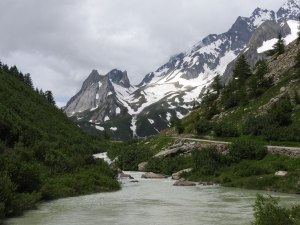 The weather was fine with only a few clouds and we started off towards Lac Combal along what turned out to be a paved road for almost the whole way. This was fortunate because we had both opted to wear our flimsy walking shoes rather than hiking boots. It took us about 45 minutes of steady uphill walking to reach the lake, and we were passing quite a few of the other hikers. At the lake there was Rifugio Combal, and up the hill beyond the lake was Rifugio Elisabetta, where we were to have stayed while walking the TMB. 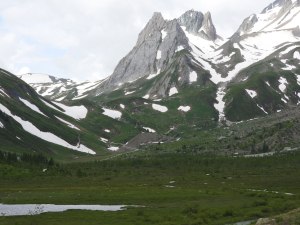 We were astonished to find a small herd of ibex here. They weren’t the big males with the curling horns; those would have been up in the high mountains. This was a herd of a dozen or so females, hanging out at a mineral lick. We really hadn’t expected to encounter them.

We climbed up the moraine to where we could look down on Lac Miage. This lake is actually a set of three or four lakes, in different colours; the highest were siltier and the lowest bluer. Our lunch spot was great because we were sheltered from the cold wind. Once done with lunch we climbed down the other side of the moraine towards the lakes, making a minor detour to check out some old bunkers before returning to the rifugio.

From the outside the rifugio was pretty dingy-looking, with its rusting metal roof, but inside it was very nice. We sat in the bar and had some tea before heading back down the road. Our ibex were still at the mineral lick so it was fun to watch them for a bit longer.

The clouds were gathering so we tried to hurry down the road, hoping to beat any rainstorm. Neither of us had come prepared for rain so we were glad we reached the bus stop at La Visaille before any significant amount of precipitation fell. But we had 45 minutes to wait for our bus, and it was starting to rain a bit, so we went into the café there and bought ice creams. One thing about the Alps, there’s no shortage of places to get coffee! 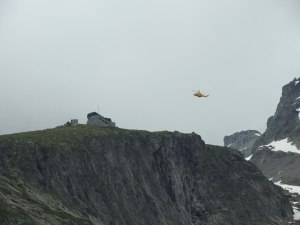 We went over to the bus stop a few minutes before its scheduled departure. Then another couple joined us, and another… and then a guided group of 10 or 12 Swedish hikers! Luckily for us we managed to get on board first, so we got seats, but then the Swedish group took forever to buy their tickets. Finally everybody was on board and off we went, down the steep, narrow, and winding road. The return trip went by quickly and we were soon back in our room.

We got hungry at about 5:30 pm so we went out looking for dinner. However the restaurants didn’t agree that dinner at 5:30 pm was a good thing so we wandered around the town for a while. Eventually we got into Pizzeria du Tunnel a bit after 6:30 pm; it was lucky we arrived when we did because by the time we were finished eating people were being asked to wait. The pizzas were reasonably good.

Next: Chamonix and La Flégère