After another late night we managed to get up at 7 am, organize our stuff, then have breakfast. Today was another driving day, not nearly as long as the marathon drive earlier in the week, but we were still away on the ring road by 8:30 am.

Within a few minutes we were at the Námafjall pass, where we stopped at the thermal area. 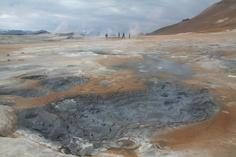 This was really interesting, with boiling mud pools and hissing steam vents and bright yellow sulphur deposits. We did a short walk through the area, watching the mud bubbling away and steam vents shooting up in the air. 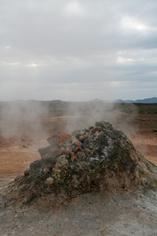 There was steam and sulphurous smells everywhere. Near the end of the walk the camera seized up and wouldn’t turn off, which was worrying. But once in the car, Rosemary removed the battery and wiped the contacts clean, which solved the problem. Note: don’t put your camera into sulphur-laden steam!

We then carried on down the road across the high plains, with spectacular views along the way. This was a part of Iceland which had never really been inhabited, so all we saw on the ground were pairs of swans from time to time. After a while we came down the valley into Egilsstaðir, where we stopped for fuel. From here the ring road went southward, climbing upwards.

There is a place where the ring road makes a big loop down to the eastern coast and back again. But instead of driving that 150-kilometre loop, there is a 20-kilometre shortcut, Highway 939. So naturally we went that way. 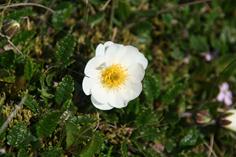 A sign at the beginning warned of 17% grades, but the road was just a normal Icelandic unpaved road, which we were used to by now. It was built in 1959, apparently on the initiative of one man. Halfway along there was a plaque commemorating him and his bulldozer. 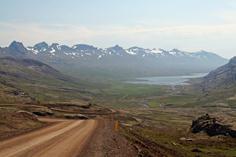 Suddenly, near the end of that section, the slopes beside the road opened up into a tremendous view down to the Berufjörd. We just had to pull off the road to look. There was a waterfall near the road and, spread out in front of us, a broad green valley with the blue fjord behind it, surrounded by jagged black peaks on one side and layer-cake basalt on the other. On the radio we were also treated to an Icelandic church choir singing the Leonard Cohen piece Hallelujah which totally fitted the scene.

After having tea and looking at the view for about half an hour, we continued down the 17% grade to the fjord below. We decided to have lunch in Djúpivogur, so we found a picnic table and set up there. The views were very lovely with the snow-capped mountains and the colourful fishing boats. 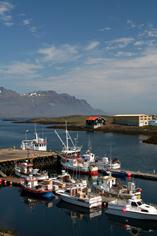 The ring road then paralleled the ocean for a while before turning inland. We went through a long tunnel, and then we were at Höfn, today’s destination. The sign on the door of the youth hostel told us it was closed until 5 pm, so we had two hours to kill. Höfn is a small town with basically one street. We first went to the visitor centre, which also housed the museum. Neil and Christine went in to have a look, and the two of us went off exploring. Of course we found the sweater shop right away, but didn’t see anything in particular that we wanted. Then we went to the supermarket where we bought some tomatoes and some chocolate-covered licorice. 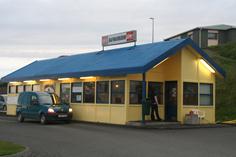 By the time we walked back to the hostel it was still only 4 pm, but the door was opened. It turned out that would be staying in another building overlooking the waterfront. After checking in we went to find Neil and Christine, who were just coming out of the museum.
The rooms were small but tidy. After a while we had dinner, which tonight was spaghetti. 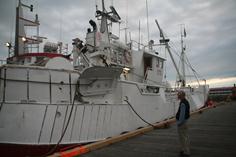 After dinner we chatted for a bit, then the two of us went out for a walk. The fog which had been hanging over Höfn all afternoon had lifted by now, so we decided to walk out the point. But we didn’t get too far before the terns started to dive-bomb us quite aggressively, so we turned back and went for a walk around the town instead. Near the end of the walk we wandered onto a point of land from where you could see four large glaciers coming down to the sea.
Tomorrow should be an interesting day. Tonight we are trying to get before midnight so we can catch up on some sleep. 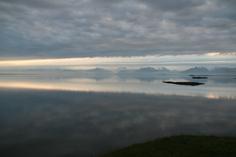