Hiking the Highlands to Hrafntinnusker

After a good night’s sleep we finally got up at about 7:30 am. Some of the others in our room had put up various things blocking most of the windows, so it wasn’t all that light in the room. But it also wasn’t sunny outside. We had our breakfast and packed our packs for the walk to the Hrafntinnusker hut, being careful to put warm and waterproof things in an accessible place.

By the time we were ready to go it was 9 am. We signed the register to say where were going, then we left. To start with our trail was the same one we had taken yesterday to see the smoking mountain. The snow buntings were singing as we hiked through the lava flow and up past the Brennisteinsalda. When we reached the place from where Christine had yoo-hooed us yesterday, we looked down and saw her and Neil climbing up just below. So we yoo-hooed them and carried on.

Just around the corner a trail branched off to the right. But it had green markers, whereas we had been following red markers. We decided that the green markers led up the back of the Brennisteinsalda, so we followed the red markers.

Even though this trail led off across the tundra, and was wide enough for Hannibal and all his elephants, after yesterday’s navigation fiasco we still had a nagging doubt about whether it was the right trail. But what else could it be? So we carried on. From here on we were on new territory, and luckily the bad weather was holding off so we did have some views. The area we were travelling in was very colourful, but as we travelled farther along we came to bigger and bigger patches of snow.

By now the clouds were very low, so we needed to watch for the trail markers in the snow. 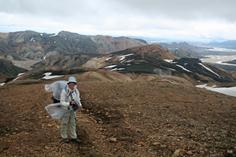 We also put on our plastic rain capes to stay dry, even though it was only misting. They did have the advantage of cutting down on the wind chill, though. It was too bad the clouds were so low because the views and pictures would have been much better. At one point the clouds lifted to reveal large areas of snow on the colourful mountains.

Our trail passed through several steaming areas, one of which had a boiling cauldron of water spurting out of the ground.

About noon we began to meet a few groups who were doing the trail in the opposite direction. By now we were walking entirely on snow, but fortunately there were numerous cairns and trail markers. Finally we crested the pass and the Hrafntinnusker hut was just below.

We went into the hut and checked in with the warden. Our bed assignments were in a room with four bunks, of which the lower bunk slept two people. It definitely would be cozy tonight. There was a small kitchen next door and several other sleeping rooms. Neil and Christine arrived a few minutes after we did, so we made soup for lunch with rusk pieces as croutons. We were still inside the cloud, so going out for a walk wasn’t practical. So we passed the time by reading the hut’s limited library, playing cards, doing sudoku puzzles, and sleeping.

An English school group which had been in the next room to ours at Landmannalaugar was here now, so the little kitchen was quite busy.

After they cleared out we made dinner at 7 pm. It was raining now, so we returned to our room, where we repeated our activities of this afternoon.

When we went round to the toilet – which fortunately was now part of the hut and not that little building way across the snowfield – we met another group who had just arrived after taking over ten hours to hike from Landmannalaugar. We had taken less than four hours, but they had been lost. Even with map and compass (and experience) it would be hard to find your way through an unknown land with no landmarks in the mist and rain. We were glad it wasn’t us.

We went to sleep about 10 pm, but at some time after that the upper bunks were occupied, probably by members of the lost group. We hardly noticed them come in.