We had arranged to rent a car for today, so at 8:30 am we finally got up. Since the car was supposed to be here at 9 am, we hurriedly got ready, cooked breakfast, then headed to the reception desk to pay for the rental.

Our car for today was a VW Polo. It was waiting for us, just down the street in a No Parking zone, so we climbed in and headed out… but first we had to get out of Reykjvavík. Our area was a maze of mostly one-way streets. After landing in the parking lot behind a hospital, we read the map more carefully and managed to find a main road out of town.

After negotiating our way to the ring road, we headed towards Selfoss. The ring road went up over Hellisheiði and through a sulphurous geothermal area. At the top we stopped at a lookout, which had a tremendous view over the southern plains, with the glaciers and the Westmann Islands in the distance. At the bottom of the hill, down in the plains, we stopped in Hveragerði to see the geothermal plant there. But it was closed to the public today, so we carried on.

Just before Selfoss we turned north onto Highway 30. We had read the Bradt guide’s suggestion to drive the Golden Circle route in the opposite direction to the hordes of tour buses, so our first stop would be the waterfalls at Gullfoss. Along this highway 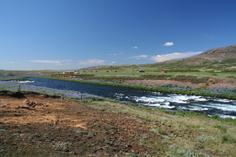 we saw our first sheep and ponies in the fields, and no matter which way we turned, there were views of glaciers and valleys and fields. We stopped at various viewpoints to take pictures and admire the view. We were so lucky that the weather was good, very windy though, so we had to put on our fleeces and Gore-Tex jackets.

We arrived at Gullfoss about lunch time, so decided to eat lunch first. Luckily there were some picnic tables, so we moved one to a slightly more sheltered place. While we were eating our lunch, ten 4×4’s arrived from the F-road out of the highlands. Their tires were huge, a regular car parked beside them and the tires were ¾ of the height of the car! 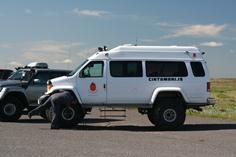 After lunch we headed towards the falls. Gullfoss (Golden Falls) is probably Iceland’s most famous waterfall. There’s a story about how it was saved from evil foreign developers by the stubbornness of the farmers who owned it. Good thing they saved it, though, because it’s a magnificent waterfall. 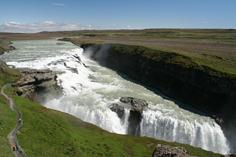 Our first view was quite spectacular, but once we headed down the flight of steps we could see the full extent of the falls. It was actually in two steps, both of which were huge. There were large clouds of spray over the falls, which we tried to avoid by following the path up on the side of the gully.

The next stop was about ten minutes back down the road to Geysir. This thermal area was the origin of the word “geyser” in the English language, but sadly Geysir itself no longer shoots its plume. However one close by named Strokkur erupts every 7 to 8 minutes. It shoots up to 20 metres high. Since we had already been to Yellowstone, this area was quite tame, but nevertheless it was fun to watch it erupt. 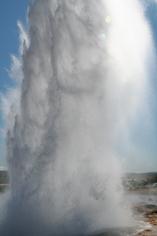 Our next destination was Þingvellir. We took Highway 37 to Laugarvatn and then the gravel Highway 365 over the heath instead of following the roundabout route on the main roads. Þingvellir was the site of the original parliament of Iceland. It was the meeting place for hundreds of years and it is still the iconic centre of the country. It is also located on the rift zone between the North American and European tectonic plates. No earthquakes happened while we were there, luckily, but it was an interesting location. According to the park information centre, the rift spreads about 2 cm per year. 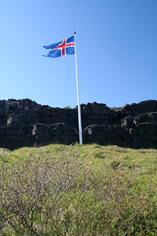 There weren’t any tour buses here; they had all long since departed for Geysir and Gullfoss so we walked around the uncrowded trails. The site is in a rocky basalt gorge – which gets 2 cm wider each year – next to a long escarpment, with a river flowing over the cliff and down into the valley below. 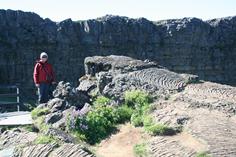 It’s a pretty place, at least with today’s weather it was. We spent quite a bit of time at Þingvellir wandering the trails, finally stopping at the Hotel Valhöll to have tea and coffee and a piece of carrot cake. That was a nice break.

Back on the main road we very soon passed a sign pointing to something about “falls”. So we turned around and went back down that side road. There was a trail which led about 1 kilometre along the gorge, 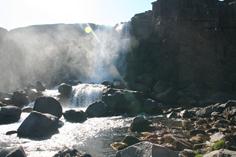 to the falls where the river flowed over the cliff. It was no Gullfoss, but it was still worth the walk.

From there it wasn’t far back to Reykjavík. This time we didn’t get lost, and not only that, we parked in a legal parking space right outside the hostel. After handing in the car keys we headed up to our room to drop off our stuff and collect some dinner fixings. We arrived at the kitchen just in time to beat the crowds. We just got our water on the stove and two other parties arrived. We had our usual dinner of pasta, sauce, and red pepper, then cut up an apple to have with our strawberry skyr.

After dinner we got our journals and went down to the front room of the hostel to sit at their tables and catch up on yesterday’s and today’s entries. There was a staff party going on there, a going-away party for one of the employees. One guy was obviously American, but his joke was that he told people he was a Canadian from Yellowknife. Apparently that got comments from people so he thought it was very funny. As the evening progressed he became quite loud and obnoxious.

We were trying to figure out when Neil and Christine would arrive from Britain. Eventually we found they were on a flight from Heathrow arriving about 11:30 pm. We calculated that after renting the car and driving it into town – and finding a parking space – they would arrive around 1 am. So we decided to go to bed, leaving a note on their door.