Our train arrived in Finse late in the afternoon. It was grey and gloomy and the wind was blowing heavy rain at us, so we paused under an overhang to put on rain jackets before walking the 400 meters to Finsehytte. Finse looked much like it did the last time we were there, 24 years ago. The interior of the hut looked similar, too, but they had renovated the place in 1993 and it was much newer-looking.

Luckily it was Sunday, so the hut was not very full and we got our own two-bed room with a view across the lake to the glacier. It was still raining out there but our room was comfortable. And anyway the weather forecast said it was going to get better, and when we start walking the Aurlandsdalen trail it’s even supposed to be sunny! 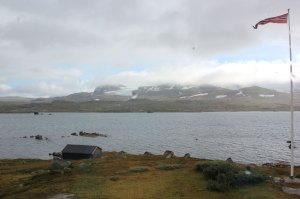 Dinner was at 7 pm, and it was very good as usual. But unlike other DNT huts, they served us the first two courses and just put the desserts on a table for us to help ourselves. After dinner we sat in the lounge and caught up on three days of journal-writing, and bed time was finally at 10:30 pm.

We had the whole day at Finse, and we could do as much or as little walking as we wanted. Yesterday’s rain and wind had gone away and instead we had mixed sun and cloud with only a light wind. So we decided to walk to the Blåisen, to see how far it had retreated since we were last here in 1990. Our route took us across the dam at the end of Finsevatn, and from there we walked along a rocky trail, climbing, levelling out, and then climbing again. Along the trail we saw numerous lemmings which scurried away as we approached. 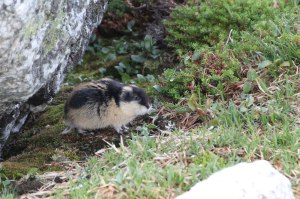 It only took about an hour and a half to reach the glacier overlook point, which was marked by a fresh pile of orange peel. From here we looked down at the glacier and decided not to descend the moraine to get any closer. So we sat for a while, having some tea and cookies and enjoying the views and watching a pair of Rough-legged Hawks circling by the cliffs. The wind was a bit nippy but when the sun came out the temperature was very nice.

We headed back down the trail and decided to have the rest of our lunch on the last high point of the trail. On the way down from there we noticed that the trail had been moved slightly, so that it crossed a river on a new-looking bridge. Did we have to jump across the river back in 1990? We didn’t remember doing that. Later we saw a weasel run past, and then after that, strangely, the lemmings were much more visible, staying out in the open for much longer.

Back at the hut we put our packs in our room and then went out for a short walk to see what there was to see in Finse. Basically nothing, as it happens. One train station, one hotel, and the Red Cross search and rescue headquarters. There were no shops to check out, so we headed back to the hut again, where we relaxed for the rest of the afternoon. As we looked out at the lake Paul said “These big lakes never seem to have any birds on them. You’d think there would be a loon or something.”

Dinner was served at 7 pm again, and tonight we were assigned to particular tables. Dinner started with cream of celery soup, followed by grilled salmon with potatoes and carrots. The salmon was cooked perfectly, which was a surprise given the number of pieces they prepared. Once we were finished dessert we went into the lounge to drink our tea and coffee. It had clouded over in the late afternoon, but so far there was no rain so once we finished our drinks we got our coats and went out. As soon as we stepped outside the rain began, so we retreated back inside, but not before we noticed a bird swimming on the lake—which turned out to be an Arctic Loon!

From the window in our room we could see a lovely rainbow at the western end of the lake. We had opened the windows to take some photos, but that caused a bit of a problem because we couldn’t figure out how to close them. We finally managed with a bit of pulling and lifting at the same time.