Our driver and birding guide Florin, from Ibis Tours, picked us up just before 4 pm at our hostel in Bucharest. He was driving a nice new car, but it wasn’t his, it belonged to another guide who was dropping customers off at the airport. We made our way through the city and out onto a highway for about 100 kilometers. Then we left the highway and followed a two-lane road which went through farmland and small villages. The scenery was very pretty, and about 8 pm we arrived in the city of Tulcea. 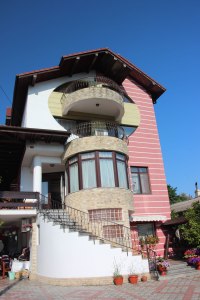 We were staying the night in a guesthouse owned by Ibis Tours. We were the only two customers there, which felt a bit strange, but our room was comfortable and spacious. Dinner was waiting for us, a three-course meal. It started with meatball soup followed by fish, which turned out to be catfish. Both were very good. We were tired from all the driving, so after trying to catch up with journal-writing for a while we went to bed.

We had decided to have breakfast at 8 am, so before going downstairs we packed our bags so we would be ready to leave. Today we were going on a boat into the Danube Delta to stay for two nights in a village named Crișan. 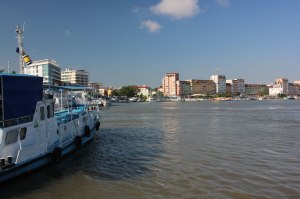 After a good breakfast Florin drove us down to the docks in Tulcea, where our boat was docked. This was the Danube River, which we hadn’t yet seen on our trip except briefly yesterday when we crossed over it. There were swallows and terns zipping back and forth over the river, along with a lot of boat traffic. Our boat was a very small boat, about 8 meters long, with a roof to keep the sun off. But since we were the only two participants on this tour, there was plenty of room for us. We loaded our bags on board and headed off downstream along the Sulina Arm of the Danube. That’s the route which the large ships take, so we soon turned off into the old Danube channel, which is a lot quieter. 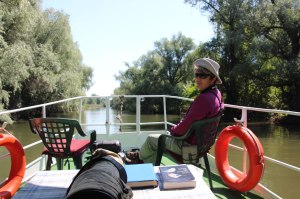 Cruising in the Delta

Along the channels we looked for birds as we putt-putted along. There were a lot of egrets which flew off as we approached, and then a lot of kingfishers near the muddy banks. We also heard cuckoos all along the channels and even saw some flying over. Every so often our boat driver, Dan, turned the engine off so we could drift with the current, and occasionally stopped so we could search out birds, like the pair of Black Woodpeckers we found near their nest tree. 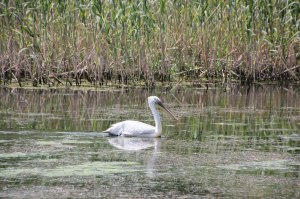 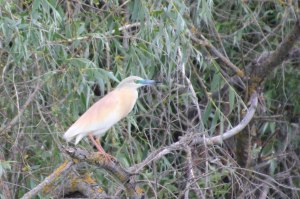 About 1:30 pm we stopped for lunch. We all sat around the portable table and had tomatoes, cucumber, cold chicken, bread, and a variety of cheeses and cold cuts. It was really lovely having lunch in the delta listening to the birds and frogs. 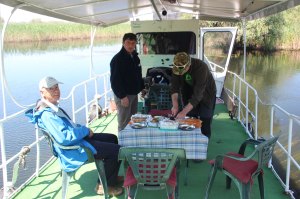 Lunch in the Delta 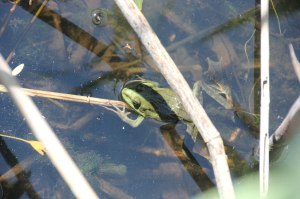 Frogs in the reeds

Our route took us past a village called Mila 23. This village was strung out along the bank of the canal, with some houses being well-kept and others quite run-down. We finally reached Crișan at about 5 pm, having seen 51 species of birds. We were staying at Pensiunea Eden, which is on the north bank of the channel, isolated from the main part of the village on the south bank. Our room was very spacious, and it even had an additional bedroom. The four of us were the only guests, and it seemed that they weren’t quite ready to open for the season as their swimming pool was still being cleaned. Before dinner we walked along the edge of the channel with Florin, just to get our land legs back. 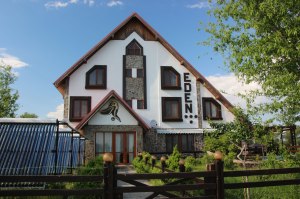 Dinner was at 7 pm and today we had soup with meatballs (or possibly fishballs) follwed by fish. The fish was locally-caught carp, and it was the strangest fish we’d ever eaten. Apparently when carp get really big they put on a lot of fat, and that was quite evident tonight! After dinner we sat and looked at some of Florin’s photos before going up to our room and trying to catch up with our journal-writing.

Next: Letea and Tulcea