September 10, 2010: Moving on again today, this time to Lake Bohinj. This meant first taking the bus to Ljubljana, then taking another bus on to Bohinj. It’s handy that the bus system is so well-developed in Slovenia.

As the bus got farther away from Ljubljana it started to go through smaller and smaller towns. It was amazing how the driver managed to get the bus through some of those narrow and twisty streets. When the bus got to the Pod Voglom hostel on the shores of Lake Bohinj in the middle of the afternoon, we were the last ones left. We checked in and settled in to get our things organized. We were basically out of clean clothes, so we washed some things in the sink and rigged up a clothes line across the room to hang them up to dry.

We had heard that there was a pizza place in Ukanc which was supposed to be good, so we decided to go there for dinner. It turned out that Ukanc was at the far end of the lake, about 3 kilometres away, but that was fine, this was supposed to be a walking holiday. And it was a good place, we got a very large pizza for only about 7 euros.

September 11, 2010: When we woke up we were in the clouds. We thought it might just be early-morning fog which would burn off, but just to check, we fired up the computer and connected to the Wi-Fi. It only took a moment to find the Vogel ski area’s web cam, which showed blue sky above and a layer of clouds down in the valley. And the clouds did burn off by about 10 am. Aren’t computers great! How did we ever travel without them? 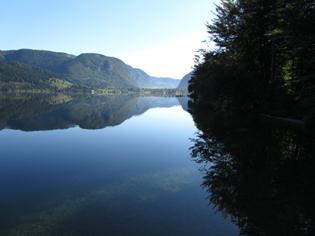 Lake Bohinj in the morning

Someone yesterday had suggested we walk along the ridge from Vogel to Črna Prst, then back down the path to Ribčev Laz, which was near our hostel. So we put on our day-packs and walked along the lake to the Vogel cable car. It cost us 8 euros each (we got the seniors rate without asking!) to ride halfway up the mountain. Then we walked up through the ski area to the main path along the ridge. 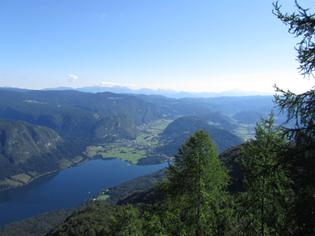 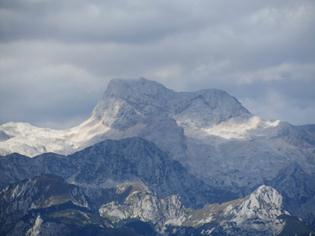 The path was a bit rough and got quite narrow when it went along a cliff, but then it became more of a regular ridge path. We could really see all the way to the Adriatic. And it was very windy, so we put on our extra clothing. By the time we got up to the top of Rodica, which was the first major peak along the ridge, it was after 1 pm. We wrote our names in the summit book and got the official mountain stamp in our book. 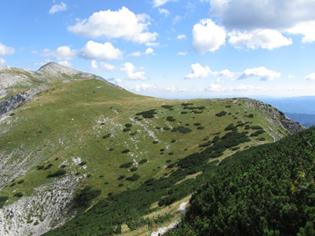 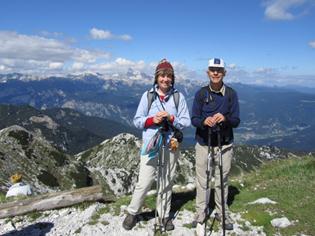 On top of Rodica

The orange sign at the top said it would be 3 hours to Črna Prst, and we thought it might be a bit risky to go on there. We also didn’t know what the path down into the valley would be like. So we decided to head back to the ski area and take the cable car back down.

For the middle of September, there were quite a lot of alpine flowers up on the ridge. We had plenty of time now so we stopped to try photographing them. When the wind wasn’t blowing them around too much, anyway. There was even edelweiss there, which we hadn’t been able to find in the Tatras. 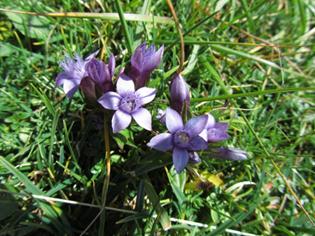 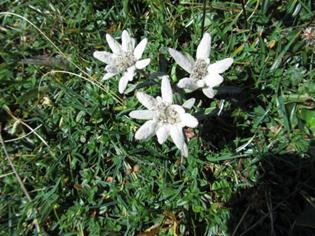 We had only paid the one-way rate for the cable car, so we had to pay the extra amount to come back down. But that wasn’t a problem. Back at the bottom, we did the familiar 3-kilometre walk back to the hostel.

Tonight for dinner we went the other way along the lake, to a restaurant in Ribčev Laz. They had a “tourist menu” where you got čevapčiči and wiener schnitzel and chips and salad followed by palačinke (crepes) for dessert. It was pretty good, really.

September 12, 2010: Today was our second full day at Lake Bohinj. We decided to do a couple of low-level walks around the valley. Just like yesterday we woke up in the fog, but again it burned off by about 10 am. 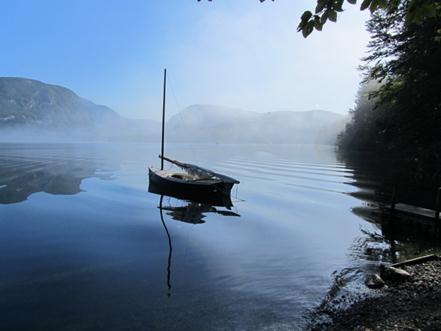 The first walk was to the Mostnica gorge and to the falls in the Voje valley, so first we had to walk over to Stara Fužina where the walk started from. But before we started out we stopped to have a look at the old church of St. John the Baptist, just at the end of the lake. The frescoes inside the church were quite impressive and they were in good shape too. 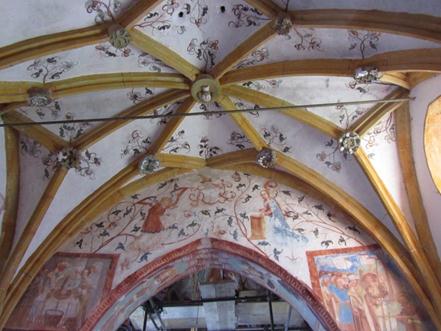 Ceiling of St. John the Baptist

We had brought information which we had gotten from a library book before leaving home, but we found that now there was an official signed trail up the gorge. However the book had lots of other information about trail landmarks. We were a bit surprised to find that the “Toblerone Hut” mentioned in the book had turned into a toll booth where someone was collecting two euros each for the use of the gorge trail. But we weren’t going to turn around just for that. The gorge was very impressive. Quite often you couldn’t see all the way to the bottom, and there were all kinds of strange rock formations. 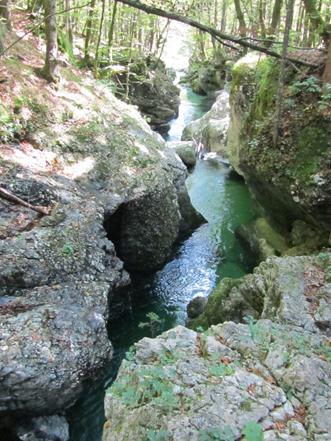 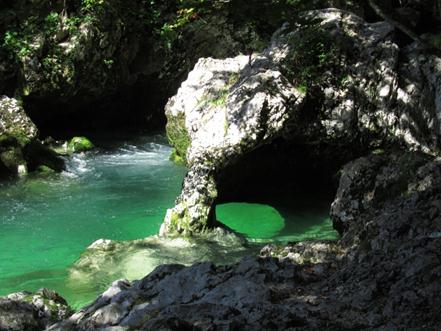 Above the gorge the trail continued for another hour through forest and meadows, up to the falls, Slap Voje. Just below the falls was a restaurant, so we stopped there and bought tea and apple strudel to go with our lunch. 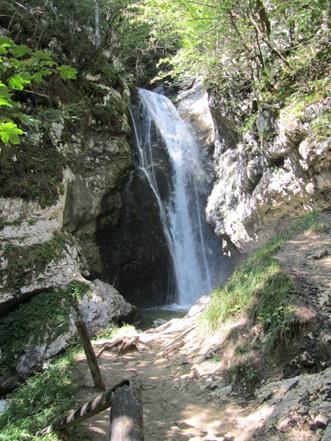 In the meadows there were a lot of little houses, but we couldn’t figure out whether people lived in them, or whether they were summer homes or holiday rentals or what. But there were men with tractors mowing the grass for hay. The grass was also full of fall crocuses, so the cows don’t have to eat just plain old grass. 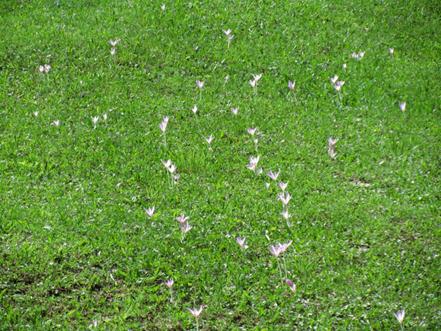 On the way down the trail went down the other side of the gorge. You’d think that wouldn’t make any difference but the gorge did look different from that side. Maybe it was easier to see down to the bottom, or something. Anyway in the green pools near the bottom of the gorge we could see fish swimming. They looked a lot like the trout we had seen in Lake Bohinj.

Phase Two for today was to walk around Lake Bohinj. We followed the signs from Stara Fužina to the lake without getting too badly lost, then headed off around the north side of the lake. It wasn’t a very interesting walk, except for the views of the mountains on the other side. And except when we met three cows coming along the trail in the opposite direction! And when we got to Ukanc at the other end of the lake, the route started to go up a boring gravel trail through the woods.

The goal of this walk was Slap Savica, the waterfall which comes down off the huge cliffs at the end of the Bohinj valley. We knew we couldn’t get to Slap Savica, then back for dinner at the pizza place, then walk back to the hostel before dark and we kept asking ourselves why we were bothering to try. But we kept on going anyway. And when we finally got to the parking lot for the falls we saw a bus pull in. There were signs there about a bus which left at 6:20 pm, which was still nearly an hour off. And taking a bus down would save us from the boring 45-minute walk back down the gravel trail. So we decided to take the chance that we were looking at the 6:20 bus.

We paid our 2.50 euros each and did the 20-minute walk up to the waterfall. It was certainly more impressive than Slap Mostnica and its history was interesting too. For example it had been used for electric power generation back in 1916 when the Austrian Empire was defending the Isonzo Front against the Italians. 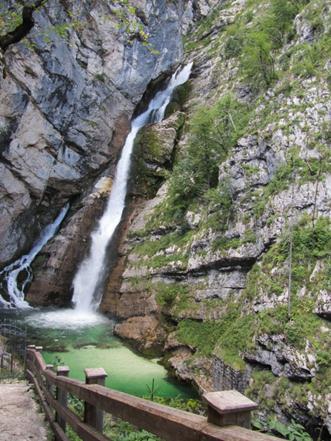 We made it back to the parking lot in time to catch the bus, which really did leave at 6:20 pm. That gave us time to get dinner and then to do the familiar 3-kilometre walk back to the hostel, where we arrived at 8 pm with just enough light to see the path we were walking on.