How could we forget? But we did forget to mention, when we walked around the lake in Bled, there’s a spot where artists usually sit with their work. And when we passed that spot, there was one artist with his watercolours of the church on the island. We stopped to look, because they were pretty good. But we were totally shocked to find out that he only wanted 4 euros for each of them. And not only that, right on the spot he drew a caricature of him and us on the back of the one we chose! While chatting away the whole time, too. You might say it was the highlight of our day, but still we forgot to mention it.

September 15, 2010: we caught the bus back to Bohinj to start our mountain walk. Actually it was more complicated than that. We tried to pay by credit card at the hostel, but their credit card machine wasn’t working right. So eventually we paid them with cash. But then we needed more cash, and the bus was due to leave in 10 minutes, so the hostel manager drove us around town at high speed to find a suitable cash machine near a bus stop. And then we caught the bus to Bohinj.

Our choice of starting point for the mountain walk was a bad one, to start with. And then our choice of trail to get there was even worse. After scrambling over some of the scariest mountain ridges we had ever been on, we finally came to a sign which told us we didn’t have enough time left in the day to get to our destination. So with much annoyance and frustration, we turned around and headed back down to Bohinj. The day wasn’t a complete waste, as we did see a chamois in the woods on the way down, but it sure felt like one. 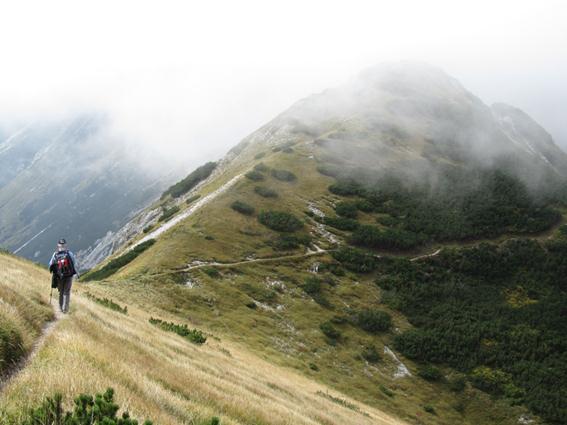 A beautiful ridge walk in the Julian Alps 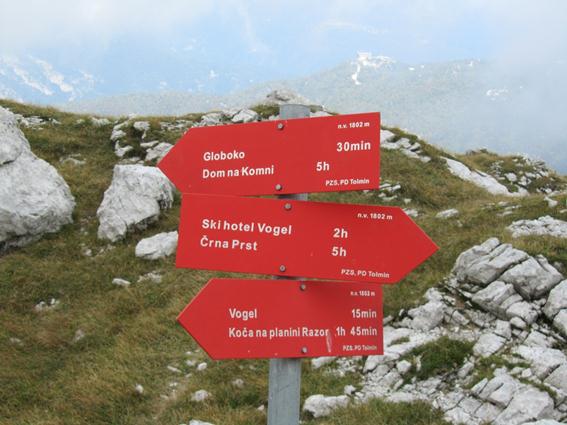 But a long way to Dom na Komni

When we got back down to the lake we found we were right next to the cemetery for soldiers who died in the World War One battles in the area. We had seen bits of barbed wire on the scary ridges and we couldn’t imagine soldiers climbing up there with packs and guns with bayonets, but apparently they did. One of the mountain huts in the area was originally a military hospital. The cemetery was very moving, especially when the first graves we came to said only “Unbekannter” (Unknown person). Somebody’s son was sent to the mountains from Poland or Hungary and was never heard of again. But even though the cemetery is nearly 100 years old now, it is still maintained and there are fresh ribbons on the graves. 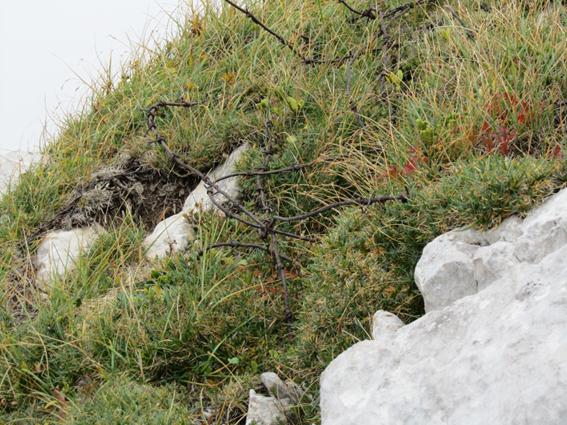 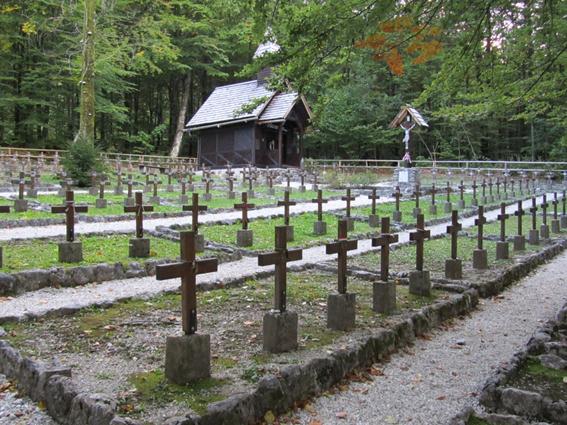 We went back to the pizza restaurant which we had eaten at before, because we remembered they had apartments for rent. The room they put us In was a step up from the youth hostels. It was a beautiful room with new furnishings, and with cooking facilities. We found it a bit annoying that none of the Slovenian hostels had kitchens where the guests could do their own cooking, so we took advantage of the stove to make our breakfast. But not dinner, the restaurant did a very good job of dinner.

September 16, 2010: we awoke to find no fog in the valley. That was unusual, and when an hour later it started to rain, we realized it meant the weather had changed. So we checked the weather forecast and found that clouds and possible rain were forecasted for the next few days. We could still have gone on the mountain walk, now that we knew the right way to get there, but the rain put us off the idea. So instead we got on the bus and headed north to Kranjska Gora, the next town on our itinerary. 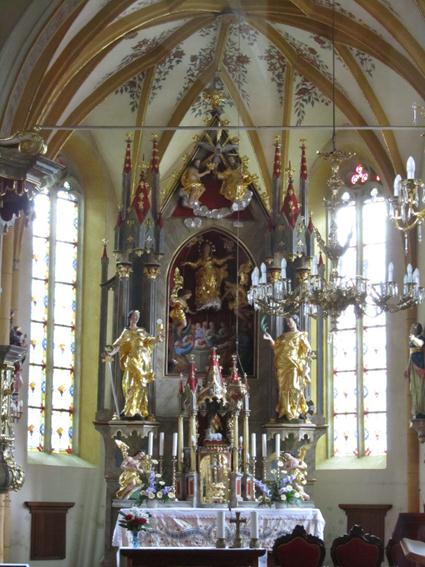 We got to Kranjska Gora early in the afternoon and checked in at the youth hostel. It was a bit dumpy but we didn’t plan to be spending much time there anyway. After unpacking our gear we went out to walk around the town. Kranjska Gora is mostly a ski resort, the biggest one in Slovenia, so it’s a very touristy place. There are a lot of trails going all up and down the valley, so we went to the tourist information office and bought a trail map. We picked one of the trails which started from the town and off we went, across the road and into the woods. By now we were very familiar with walking through Slovenian forests, so we felt right at home. Soon we came out into farm fields where we saw the typical Slovenian livestock: cows and sheep and… ostriches. Yes, ostriches, a male and three females, and not only that, there were half a dozen ostrich chicks at the far end of the field. We wondered whether the ostriches would live there over the winter, or what would happen to them. 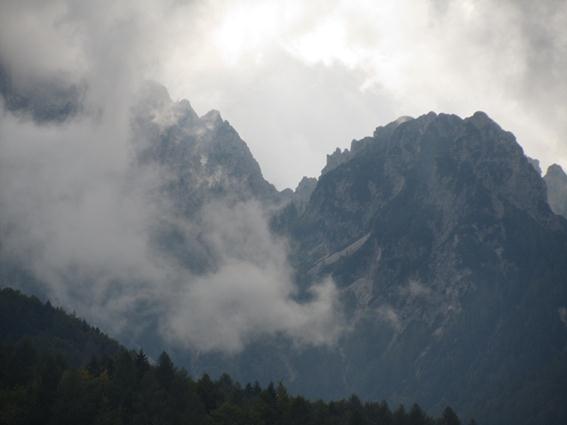 When the clouds lifted a bit 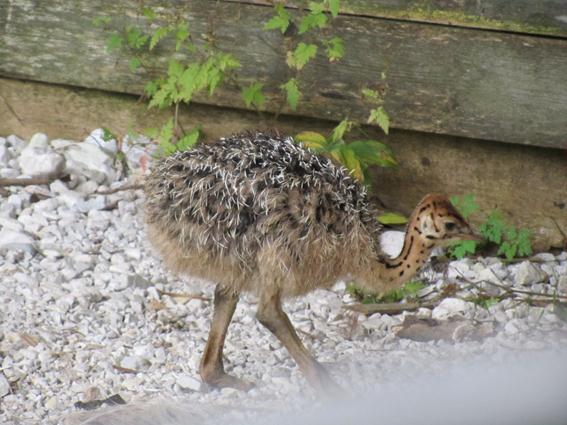 On we walked until we got to Podkoren, the next village up the valley from Kranjska Gora. From there we turned back and followed the cycle path back. The whole walk didn’t take much over an hour or so. Back in Kranjska Gora we saw a stream of classic cars going into a parking lot. That turned out to be an organized event, the Alpenfahrt. Most of the drivers seemed to be Austrians. We asked one of them about the event but he didn’t speak English. After that we walked up the hill a bit, to a little lake beside the road, and then back to town again, where we checked out the shops. For several days we had been looking for a pair of hiking trousers for Rosemary, to replace a pair which was getting seriously worn out. So far we hadn’t found anything, but when we found a pair of Columbia pants marked down to only 8.11 euros in one of the sporting goods stores, that was a deal we couldn’t refuse. 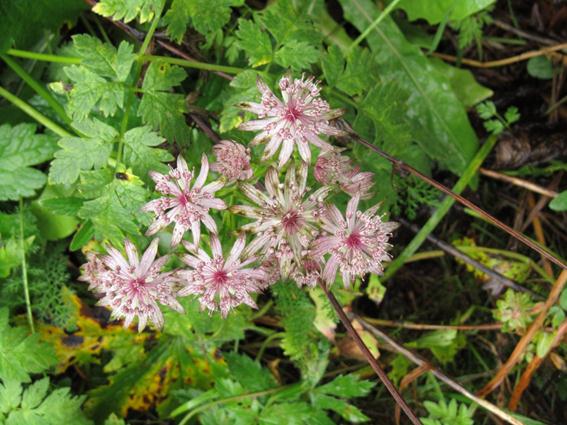 Flower at the side of the trail

We found a pizza place for dinner (you can’t get away from them in Slovenia) and, having learned from experience just how large of a pizza you got for your 6 or 7 euros, ordered just one pizza split between the two of us. The waiters always seem a bit surprised at that. But it was a good pizza and half of it was quite enough food for us.

September 17, 2010: it had been raining all night, and when we woke up it was still raining heavily. We spent the morning sorting through all the things we had collected on our trip and doing a bit of laundry. At noon it was still pouring, but at 1 pm it had stopped, so we grabbed our day packs and rain gear and headed out for a walk. Our goal was to see the giant ski jumps at Planica, so off we went along the cycle path. Past Podkoren we went, then up through the woods for a while. Sometime in the woods it started to rain, and when we finally got to Planica it was raining quite hard. The first thing we saw there was the ski jump which had been the site of the 1985 world championship. But it was just a piddling little thing compared to the giant ski jumps which were next to it. They were so big that the judging stand was about six stories high. A sign there said that the world record jump, set on that hill, was 239 metres. Just unimaginable. 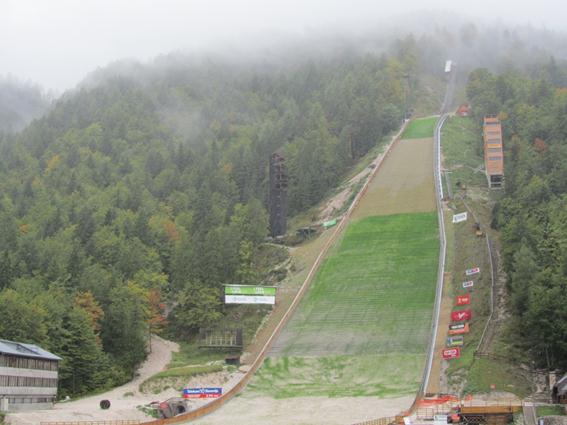 The big hill at Planica

From there we walked back down to the valley, to Rateče, which is the last village before the Italian border. Apparently it’s the coldest village in Slovenia in the winter because of its location. We walked up through the village until we found a café, where we had coffee and hot chocolate. The television was on, and although we didn’t understand the Slovenian announcers, it was pretty clear that the weather we were having was the lead story on the national news. We could have been walking for three days through the mountains in this weather, so we were very glad that we had screwed up our navigation so badly. 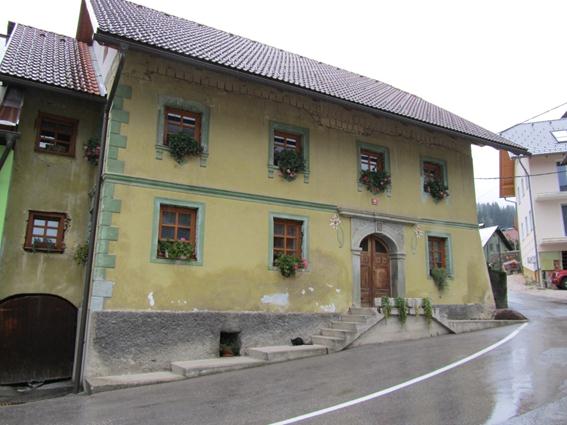 On the way back to Kranjska Gora we took the path which led past the source of the Sava River. The source is a blue and green spring-fed lake in a nature reserve called Zelenci, a beautiful spot even in the rain. We sat in the viewing tower for quite a while, watching a pair of grebes diving. Then it was back along the cycle path, all in the rain. Thank heavens for Gore-Tex! 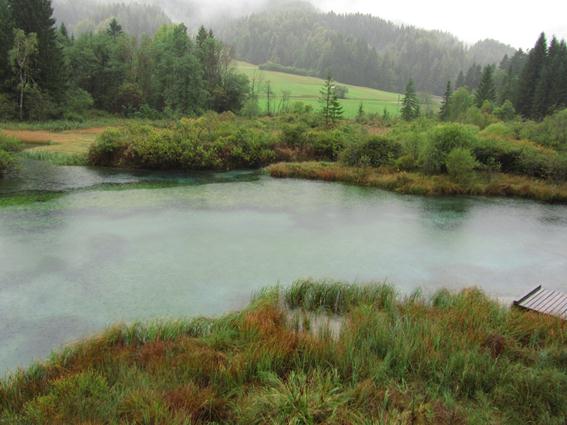 Zelenci, the source of the Sava River

We realized that, apart from the žlikrofi in Idrija, we hadn’t really had any traditional Slovenian dishes yet. So we looked for restaurants which might have that sort of thing. But no luck, not in a tourist resort. So we settled for the restaurant at the Pension Lipa. This wasn’t traditional Slovenian at all, but it was an excellent restaurant. Rosemary’s risotto was the best risotto she had ever had. The crème brulee for dessert was beautifully presented, and after all that the waiter offered us a blueberry liqueur on the house. It was very nice, very blueberry-flavoured and not so strong that it knocked you over.

The rain was still pouring down as we headed back to our hostel room, where we hung up our dripping rain gear to dry. Not much hope of that as they haven’t turned on the heat in the room yet and the humidity is about 100 percent.