Switzerland is Closed on Mondays

We headed out of the hostel and over to the nearby train station at Wollishofen for our trip to Zug. It’s easy to buy tickets from the machines at the stations, you can get the instructions in English and you can type in your destination one letter at a time and select from a list. So in no time at all we had two tickets from Wollishofen to Zug. However the ticket machines don’t tell you what trains to take. It’s up to you to know that already. Fortunately we had done our research last night and found we had to change trains in Thalwil, just a short way down the line.

That all worked perfectly and soon we were getting off in Zug. Zug is like a miniature Zurich. It’s on a lake and it is a 500-year old town surrounded by newer developments. We started off by walking along the lake shore. At the far end near the yacht club there was an interesting children’s play area with statues made of wood and ropes. And there was a small zoo containing only sika deer which come from eastern Asia. They were making a funny kind of whistling sound. 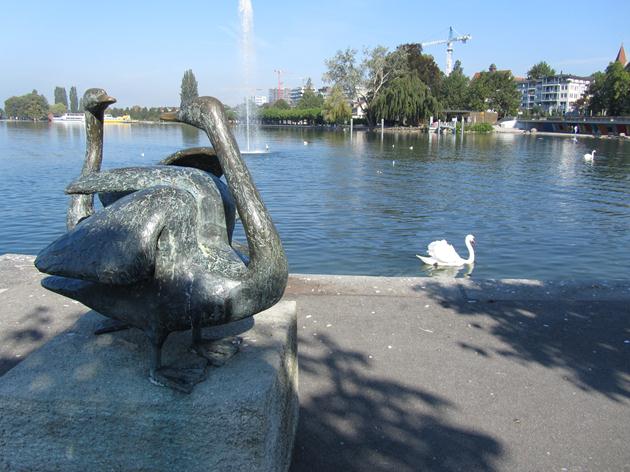 Swans at the waterfront in Zug

The old town was small but well-preserved. We bought lunch at a small bakery and sat on a bench by the lake to eat it. It was very pleasant sitting there in the sun. Just by where we were sitting there was an outdoor aviary with a strange collection of birds. There were ordinary birds like Common Pheasant, and then there were extremely endangered birds like the Bali Starling. 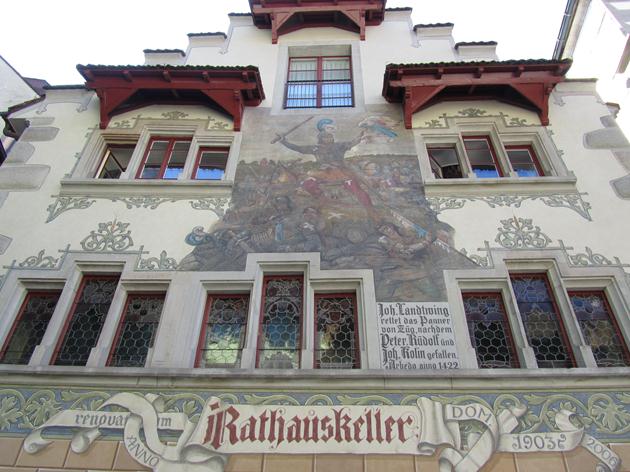 After lunch we set out for our main destination, the Zugerberg. We had done our homework and knew we had to take the Number 11 bus to the very end, and if we put “Zugerberg” into the destination in the machine, our ticket would include a ride on the funicular railway. That all worked perfectly too and soon we were at the top of the funicular. We took a brochure from the box and headed out to the trails.

From here the views south to the Alps were terrific, with hardly a cloud in the sky. (Unfortunately the view in the other direction was of the brown smog cloud covering Zurich.) There were patches of forest mixed with Swiss alps meadows, and we could hear cowbells clanging off in the distance. It was really idyllic and there were a lot of other people up there enjoying the sun. We even passed a couple of school groups.

One of the trails which started from the funicular railway was a “Sculpture Trail”. We decided that looked good. It had wooden statues of forest animals along it, and it was interesting looking for them. Especially when we didn’t know the German word for the animal we were supposed to be looking for! We found most of them, only missing a few. And we didn’t even get lost following the trail signs!

We decided to go a bit beyond the turnaround point of the sculpture trail and follow another trail on to a little chapel in the trees. Beyond that we saw on the map there was a restaurant, and we were really feeling like getting some ice cream now. We found the chapel, which was very picturesque, and just down the road was the restaurant. Which was, guess what, Closed Mondays!

So we headed back and followed the rest of the sculpture trail. On the way there was another restaurant which was also Closed Mondays. Okay, no ice cream for us today.

On the map we could see several trails which went down to the town. It was still early so we decided to walk down the mountain instead of riding the funicular railway. After a bit of forest walking our path started to go through farmers’ fields. It was a bit like English walking where you walk through flocks of sheep, only this being Switzerland it was herds of cows instead. At one point the trail went where one of the herds had been resting in the shade for a while, so our boots got quite mucky.

View over Zug from Zugerberg 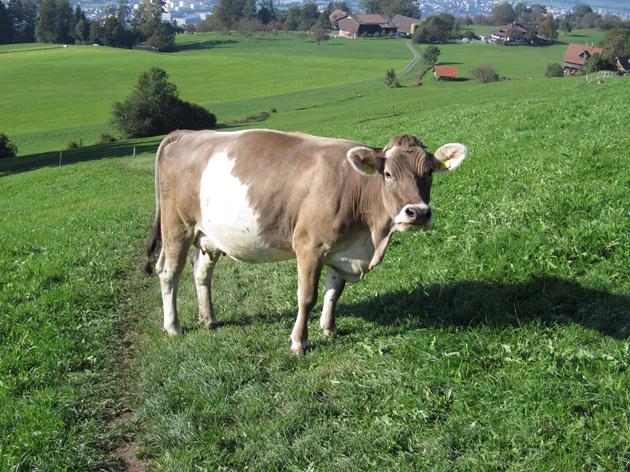 Our path through the fields

Back in Zug we looked for a dinner place. Finally we settled on Juanito’s Mexican Restaurant, which wasn’t too pricey. It was good Mexican food too. As we were sitting there eating and looking over the lake, we noticed that almost all of the cars going by were Audis or BMWs or Mercedes. Quite a contrast to Slovenia where we hadn’t seen any cars like that.

Getting back to Zurich by train was just as simple as getting to Zug was. Except for when we didn’t expect the local train in Zurich to have a first-class section and we got into the first-class carriage without paying attention. The lower section was occupied by a few men in suits so we sneaked upstairs, hoping the smell of our boots wasn’t too noticeable. The first thing we did when we got back to the hostel was to go down the hall to the bathroom and clean them up.