Today was a travel day, a long trip to La Línea del Concepción near Gibraltar. But our first bus didn’t leave until 11 am so we had a leisurely morning. After our usual breakfast we collected our bags, checked out, and walked down the hill to the bus station. Unlike when we arrived, this time it was obvious how to get there.

The bus ride to Cádiz took about an hour, with the only stops near the end. But our next bus, to La Línea, didn’t leave until 4:30 pm, so we had a long layover. The Cádiz bus station is very new and clean, but we didn’t want to just sit there. Luckily it had lockers, so we bought a token for € 3 and stored our packs in one of them. We also bought our tickets for the 4:30 pm bus and then headed out for a walk. 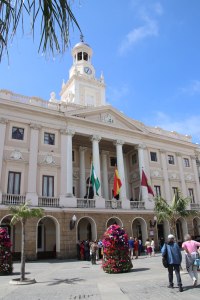 Almost immediately we came to the cathedral, which is monumental but not on the scale of the cathedrals in Toledo and Sevilla. We didn’t go in. Cádiz, at least the city centre, sits out at the end of a peninsula, so for the most part we walked along the sea front looking for birds. There weren’t many, except some gulls.

We sat on a bench and had lunch, which consisted of some packaged crackers and the left-over Magdalena cakes. The day was sunny and warm with a lovely breeze off the water, so it was an enjoyable way to spend the bus layover. There was a long jetty which went out to the Castillo de San Sebastián; we followed it out, noticing a lot of Ruddy Turnstones on the adjacent rocky beach. But the Castillo was closed because the bridge from the end of the jetty had been washed away in a storm and it hadn’t been rebuilt yet.

Back at the bus station our bus to La Línea left right on time. But it stopped in Tarifa and Algeciras en route, so we arrived in La Línea at about 7:30 pm. Again we had difficulty finding the hostal despite having a printed Google map, but finally we found the place and checked in. After settling in we headed right out for dinner. After looking at TripAdvisor we had found a place very close by, La Bodeguya, a new-looking place with a long menu. We had to ask for the English version to figure it all out! We had a couple of pork buns and a couple of tapas, which were all very good.