Birding in the Pyrenees

Today was our first full day in the Pyrenees. In the morning we went up to one of the local hiking trails in quest of the fabled Wallcreeper. The trail was connected to the long-distance GR-11 trail and it led up through a forest with a lot of forest birds.

Before long we came to the cliff where Wallcreepers were known to hang out. Soon a couple of them arrived and flitted around the very top of the cliffs, but they quickly flew away. From time to time they flitted by the top of the cliff, where you could at least make out their shape. It wasn’t until about an hour and a half later that we finally got a good look at the pair, briefly sitting near the bottom of the cliff. Good thing too, because Wallcreeper is one of Europe’s hardest birds to find.

After that we headed back to the hotel for lunch. This was a good plan because rain and hail were pouring down outside! After the rain stopped we went out for a walk around the town. In the middle of town in an area of very narrow streets we found a large stone monastery, which has probably been there as long as the town has.

Later in the afternoon we went up to an area above Oza, where we looked for subalpine birds. We found our first Dipper here, right by the bridge at Oza, and in the nearby forest we found both Goldcrest and Firecrest.

Dinner was quieter tonight, since it was Sunday and the hiking group had left. Paul had peppers stuffed with pureed cod and Rosemary had the same veal she’d had last night. 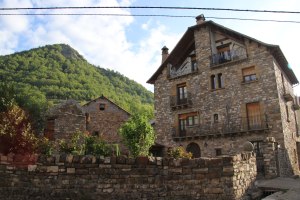 Foothills of the Pyrenees

Herd of horses by the hiking trail 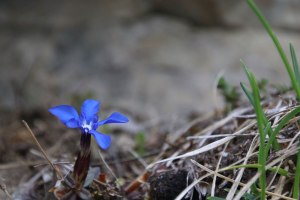 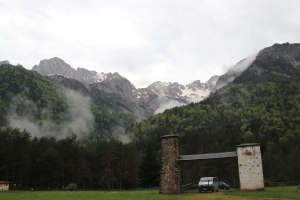 School camp in the Pyrenees

We got up early to go on the 7 am bird walk behind the village, but there wasn’t much to see. Only a Green Woodpecker flying by. Then after breakfast we headed out for a day’s birding.

The vans climbed up over a pass and down into the region of Navarra. This was culture shock because now we had road signs in Spanish and Basque! Pamplona is the capital of the region and it’s part of the Basque Country. We stopped at the visitor centre in Roncal for toilets and to quickly check out the exhibits.

As we continued up the Roncal Valley a Red-backed Shrike flew across the road. We all hopped out to look for the bird and Rosemary relocated it. It turned out that there was a pair, male and female.

Before long we arrived at the high country, where there were a lot of alpine birds we hadn’t seen yet. We even crossed over into France, where we had lunch at the La Pierre St. Martin ski area. It was all closed up so we just ate in the parking lot. From here we saw a Lammergeier, a rare vulture of the high mountains.

Heading back down we found a Eurasian Jay and then took a different road, stopping at the Refugio de Linza. Here we were looking for Marsh Tit. So we all walked up through the damp beech woods which Marsh Tits like—and found nothing. We walked back down through the woods to the refugio—still nothing. And then after a couple of minutes Rob said “Wait—there’s a Marsh Tit on the picnic table!” And so there was. We all laughed at that.

Back at the hotel we found that the lights were all out. They told us that the lights had been turned off at 4 pm for fibre-optic installation and would come on again at 8 pm. So Rosemary had a shower illuminated only by a headlamp. And the lights finally came on at 9 pm, near the end of dinner.

A quick visit to Navarra

Finally we see the Pyrenees 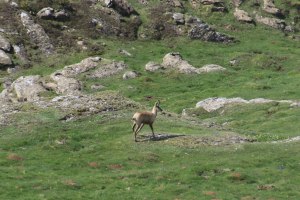 Over the pass into France 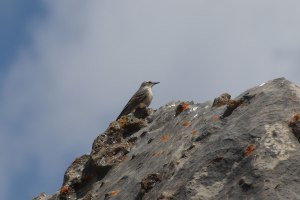 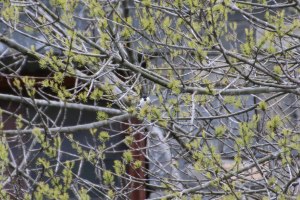 After breakfast we checked out of the hotel and the vans headed up to a different alpine area, near the Formigal ski station. There we found some new species, including a Whinchat, which had been our nemesis bird on Fair Isle a year ago.

We were looking for White-winged Snowfinch, which lives in high mountains as close to the snow line as possible. So we started walking up a valley on the French side of the border. The wet parts of the grass where snow had recently melted were slippery, and Paul fell in the mud twice. Rob saw one of the birds, but it flew away and couldn’t be found again.

While the guides scoured the high country we watched a herd of about 30 chamois with very cute babies and a flock of about 300 Choughs. There were both Red-billed and Yellow-billed Choughs in the flock and they didn’t seem to hang out in mixed-species groups. Eventually we gave up on the Snowfinches and after a packed lunch in a parking lot (for the second day in a row) we headed back downhill into Spain.

Now we travelled east, stopping to bird from time to time, and we ended up in the tiny village of Lecina. We checked in at a small hotel in the town, where only about eight people live. Paul changed out of his muddy clothing and had a shower. Our dinner tonight was a rather gourmet meal; we had tomatoes, bocconcini, and olives followed by eggplant stuffed with smoked salmon as starters. The main course was curried chicken with rice. It was all delicious.

After dinner we went out to look for the local Tawny Owl. This was very easy as we could hear it hooting as it flew around the village, and it continued hooting even after we went to bed.

Siresa in the early morning

Spring flowers in the Pyrenees

The valley where the Snowfinches live 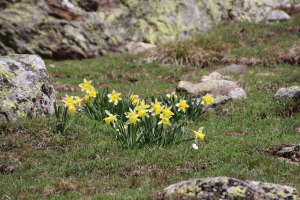 Spring daffodils in the valley

Choughs versus a Golden Eagle

A marmot at its burrow 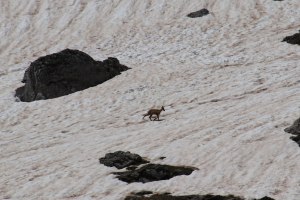 A chamois crossing a snow field 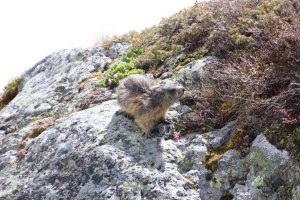