Finally we had a balloon ride scheduled! So we were up at 4:45 am—who needs an alarm when you have the morning call to prayer and nervous tension to wake you up? Looking outside, the weather looked great. By 5:20 am we were at the hotel reception, where the van picked us up and took us to the balloon company’s office, where they gave us a quick breakfast of strawberries, cake, and savoury breads. After that we all went out to the van with our pilot’s name on it; our pilot was Mike Green from Birmingham in England. Mike looked like a grizzled veteran of the ballooning game.

We’re going for a balloon ride!

The takeoff point for Butterfly Balloons was located about 20 minutes out of town, way out past Ortahişar. Several balloons were already in the air, so the morning sky looked very colourful, and others were taking off as we passed them. As we (sixteen of us) climbed into the basket of our balloon they were already inflating the balloon, and Mike gave us instructions on how to handle a “fast landing”. 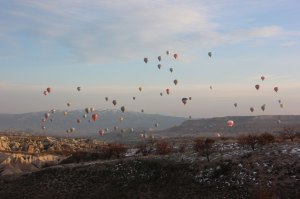 Lots of other balloons

Homestead among the fairy chimneys

And then up we went, slowly at first as we moved horizontally across the field. It was very interesting to see the fairy chimneys from above. As we floated along we could see a vast array of other balloons in the air, and around us the plains and hills still with some snow, and to the east in the distance we could see the big volcano Erciyes Dağı. And when we got high enough we could see as far south as the Taurus Mountains. 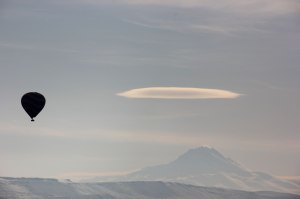 Mike piloted us over and slightly down into the Zemi Valley, mostly staying low and skimming past the rocks. Sometimes it seemed you could almost reach out and touch them. We continued over parts of Göreme including the cemetery (“Yesterday’s passengers are buried there”) and past the Love Valley before landing in a field just beyond that. We braced for the fast landing but it turned out to be unnecessary. Altogether it was an amazing experience. 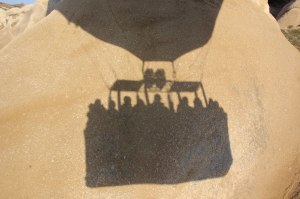 Flying past the rocks

After we landed we had a glass of champagne and received our certificates, and since two of our fellow passengers had a plane to catch, we quickly got back into the van and headed back. 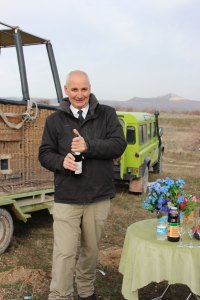 End of a successful balloon ride

At the hotel we had second breakfast, the real breakfast, while planning what to do for the rest of our last day in Göreme. Finally we had sun after several days of clouds and rain and snow, so we decided to go walking. Our plan was to walk up the Güvercinlik (Pigeon) Valley to the nearby town of Üçhisar; this trail started basically at the bottom of the hill where our hotel was located. Following the signs pointing to Güvercinlik, the way was easy going at first, following an old cart track. We went through a couple of tunnels which had been carved out of the limestone. Once past these the track became increasingly muddy, due to a small creek flowing down it, and in some places it was difficult to avoid sinking into the mud. Although there was a network of trails, we followed the track until it came to a fence with a sign saying (in Turkish) “Closed, Dangerous”.

Trail going through a tunnel

So we turned back and followed the first alternative trail, which led up a side valley and turned out to be the correct way. Along this valley were some impressive fairy chimneys and several cave houses. We hadn’t seen any pigeons yet, but up here there were quite a lot. That was probably because the man running the tea shop was feeding them. Anyway it wasn’t long before we came out on a road below Üçhisar. Its name means “three fortresses”, referring to the three rock towers which are visible from a great distance. We had some trouble getting up to the castle, because none of the streets seemed to go up there and most of them had construction taking place.

But we finally found our way through the construction area and up to the plaza in front of the castle. It’s not a castle, strictly, but rather a fortress built into the largest of the three rock towers. After paying our entrance fee we climbed up inside the fortress using a series of stairs, finally coming out on the top of the tower. From there we had an amazing view over the area, from Göreme on one side to the larger town of Nevşehir on the other. Luckily for us the weather was still quite clear. We sat up on top for a while before heading down for the return trip. Of the actual fortress there wasn’t much left except a sign explaining its history. 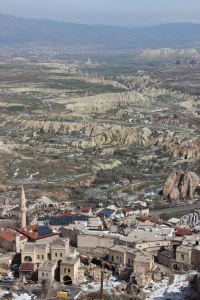 We didn’t want to walk back down through the construction site, but our efforts to find another way just resulted in us walking a huge loop on the road around Üçhisar. On the way back down the trail we stopped at the tea shop at the top of the Pigeon Valley for a glass of tea. The proprietor had a few words of English, mostly to do with selling tea. But when we pointed to a white-flowered tree he responded with the Turkish word for “almond”.

While we were sitting there a local man arrived with four tourists in tow. It turned out that they had tried to climb the “Closed, Dangerous” fence and he had stopped them and sent them up the correct trail. They could speak English so we sat and chatted with them for quite a while. They were from Medellín, Colombia. The youngest was a boy of about 14 and he wanted to practice English on us. Two of the others, a father and son, were doing a year-long motorcycle journey around the world, which sounded like a neat idea. But they were mostly telling us about their problems in getting visas. It’s not as easy for Colombians as it is for us.

All of us were heading to Göreme, so we continued down the trail together. By now the trail had thawed in the sun, so it was quite slippery in places. Soon we left the Colombians behind and returned to the town, where we decided to have lunch at the Old Cappadocia Café (again). This time we both had the lentil soup, which we agreed was good but not as good as their chicken soup. We spent our afternoon doing not much, except that we counted up our cash to make sure we had enough to pay our bill tomorrow morning, as well as other future cash requirements. After tomorrow we’ll be in a place without ATMs for a week.

For dinner we had made reservations at the Top Deck restaurant, which came highly recommended by a lady we had met in Selçuk. We decided to order a plate of mezes (appetizers), because that was part of Turkish restaurant-going which we hadn’t tried yet, and a beef stew with rice dish. Along with that came a salad and a basket of bread. Some of the mezes we really liked, and some of them neither of us liked—something which rarely happens. But the beef was good and the meal was a good experience, and at the end we were both very full.

This was our last night in Göreme, and tomorrow we have a long bus ride to Antalya.

Next: Arrival and Coastal Walk