Walk in the Snow

Yesterday the people at the office told us that the balloon flights would almost certainly be cancelled today, and if they weren’t then somebody would come and knock at our door. Well, guess what? No balloon trip this morning. And snow is falling outside!

However it was only light snow, so after breakfast we put on our warm clothes and headed out to do some walking. We chose the Red and Rose Valley trails because they had lots of interesting features. But before leaving we asked the man at the reception desk for advice, and he pointed out a short cut on the map. So off we went.

We followed the road towards the open-air museum, but before we reached it we turned off at the sign pointing to Kılıçlar (“Swords”) Valley, as per our advice. The walking was easy, it was only snowing lightly, and the views through the snow were okay. Our trail was more of an unpaved road, and it went in front of the fairy chimneys rather than through them. And accompanying us on our walk were two of the local dogs, who would bound ahead and then stop to see if we were keeping up. We saw a few other hardy souls but for the most part the area was quite deserted.

We soon found out that there wasn’t a trail as such, but a network of paths meandering in all directions through the chimneys. The whole area was covered in them and most of them had doorways at various levels. It would have been interesting to be here when they were occupied. After meandering for a while we stumbled across a sign “Rose ->” spray-painted on a rock. After following a few of those we plunged down off a ridge into the next valley over; somewhere up the far slope were the Red and Rose Valleys.

There was a road running along the valley, so we followed it towards Çavuşin, the next village to the north. There were official signs here which tried to tell us how to get to the Rose Valley, and eventually we made a guess and found ourselves there. There were orchards up here among the chimneys, but they had all been cut down. Following the narrow trail we scrambled up a steep slope to view the Ayvalı Kilise, but unfortunately it was locked up and there was nobody to let us in. That was a pity—the pictures we found on the web looked spectacular. 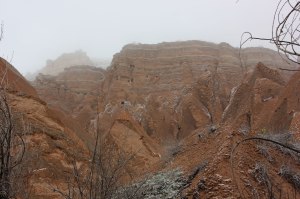 We continued following the signs pointing us along the Rose/Red route, although there were so many signs along the way that it was hard to know which ones we should be following. But the trail we were following ended near the head of a valley, with perhaps a steep climb over a ridge, but we couldn’t tell. So we opted to return the way we had come. Returning to the dirt road we stopped at the tea shop to have a warm drink. 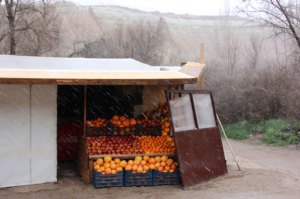 This was not your usual tea shop, but rather a ramshackle fibreboard and plastic shack with a stove inside. The previous group of customers had used up his supply of apple tea, so we had orange tea instead. His dish-washing made us leery of his hygiene standards—dip glasses in a bucket of water then rinse them off under a tap and turn them upside-down to dry. At least the orange tea was made with boiling water! As we sat inside we could see the snow starting to fall harder, so we decided to skip looking for the Red Valley and head back to town instead. So we said our goodbyes and climbed back up the hill to the Kılıçlar Valley. Our trusty dog was waiting outside, ready to accompany us wherever we might go.

Back in town it was snowing quite hard, and after some indecision we went into the Old Cappadocia Café in the centre of town for a bit of lunch. Both of us opted for chicken soup, which turned out to be really good, and it was served with freshly-made pita bread. After that we returned to the hotel and sat in the lounge drinking tea and watching the snow blow horizontally through the courtyard. For dinner we returned to the Old Cappadocia Café, where we had pide (Turkish pizza) which were very tasty.