We had decided to do a walking tour today, so after breakfast we headed out towards the Chora Church. (You won’t find that on the map unless you look for its current name, which is “Kariye Müzesi”.) First we went up to Sultanahmet Park, and then followed the tram tracks until they passed the University. From there we turned right and went along Fevsı Paşa Caddesi, which is a very busy main road. Along this road was the Aqueduct of Valens, whose ruins were still two levels high in this area; a park with a big statue of the conquerors who overthrew the Byzantine Empire; and what seemed like hundreds of shops selling very elaborate wedding and formal gowns.

After about an hour we finally came to a sign pointing the way to the Kariye Müzesi. It was only a few blocks to the museum, which had previously been a mosque and before that a Greek church. The outside was covered in scaffolding, but luckily with the exception of the central nave we were able to view most of the interior. The whitewash had been removed from the walls, revealing the original mosaics and frescos and the walls and ceilings. Absolutely amazing was our first impression. With the help of Rick Steves’s book we worked our way through the ceiling mosaics which told the story of Jesus from birth to death. The details of the faces were quite astonishing; only a few of them were damaged and the rest looked as if they had been painted last month. 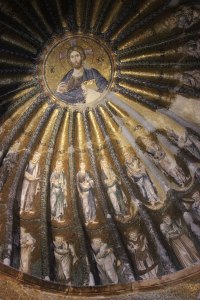 The majority of the mosaics are in the outer and inner narthexes. In the parecclesion (a long chapel on the side of the church) there are no mosaics, but rather there are frescoes on the walls and domes. In this area the patron and benefactor of the mosaics was buried with his family, but today there are no signs that this was once a burial chamber. 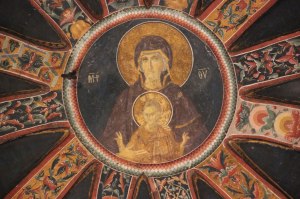 After we left the church we followed the “City Walls” walking tour from Rick Steves’s book. It started out through a very poor neighbourhood, where some of the buildings were ruins and the others weren’t very nice. There were a lot of parking lots there, but they were all nearly empty and it was hard to tell who would want to park there. We followed the old city wall past a few points of interest, like a little cemetery right beside the wall, and then down into the lower streets, which weren’t quite as poor and run-down. We had a quick look at the Greek church with the healing spring before walking through the part of İstanbul with a large Roma population; although you couldn’t really tell that by looking at the people in the street. 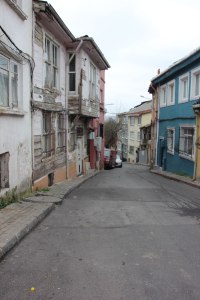 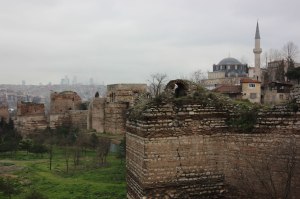 The walk ended up at the Greek Orthodox Patriarchate, which is the world headquarters of the Greek Orthodox Church. There are almost no Greeks left in İstanbul now, but worldwide the church has about 25 million members. The church here is quite small but it’s very lovely, with a large gilded (or gold?) iconostasis at the back.

We weren’t far from the Golden Horn here, so we went down to the shoreline and walked along the sea wall back to the city. Stopping at the plaza near the Galata Bridge we bought our usual simits for lunch and sat on a bench to eat them. Unfortunately there were Roma kids begging at the plaza, which was rather annoying. So far the weather had cooperated, but now we were starting to notice a slight drizzle, so we headed back to the B&B via the old train station and the Orient Express café.

After some hot chocolate we decided it was time for some shopping, so we went out to the Arasta Bazaar to see if anything struck our fancy. We wandered down the aisle, stopping to look at a couple of places, finally going into a shop selling cushion covers. Their designs were quite simple, but typically Turkish in style, so we decided to buy two of them which went well together. We then looked at some ceramic pieces at another shop, finally settling on a small whirling dervish.

For dinner we went back to the Rumist Café, where we had eaten a couple of nights earlier. There was another Canadian staying at our B&B, a teacher from Coquitlam, and when she passed by the restaurant we encouraged her to join us. We had testi kebab, which is cooked over a fire in a ceramic pot. The waiter made quite a show of opening the clay pot with a big knife, encouraging people to clap and cheer. The meal was actually quite good in the end.

After finishing our meals we sat in the restaurant for a while, talking about travelling, when suddenly a fight broke out inside the restaurant. There was a man and a woman shouting and screaming at each other and then he hit her in the face and she fell back onto a couch. The staff all looked very embarrassed and next thing we knew a police car arrived and the woman was taken away in it. The man stopped at our table to apologize for the noise, which confused us even more.