This morning we actually packed up before heading down to breakfast at 8 am. Breakfast was our usual porridge, toast, tea, and orange juice. Before leaving we looked out of our window and saw that even though the clouds were very grey, they were still high clouds above the summits. But, they were a bit thicker than they had been on earlier days.

We were out of the door about 8:40 am. Our route followed the A685, the road outside the B&B, down into Kirkby Stephen, then crossed Frank’s Bridge and headed east, up through sheep pastures towards the Nine Standards Rigg. It was a long steady climb up to the Nine Standards, with an incredibly strong cold wind blowing into our faces. We could barely climb into it. We stopped to look at the disused Merrygill Viaduct, then followed the road around a quarry and up a track. 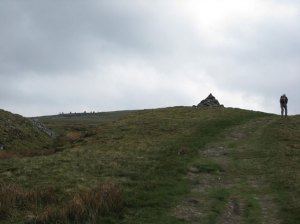 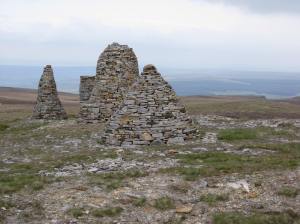 Instead of being standing stones, they were actually pillars made of flat stones, very much like the stone walls in the area. It would have been nice to linger, but on the top it was so cold that we stayed only long enough to put on jackets, toques, and wool mittens, and set off across the fell as quickly as possible. 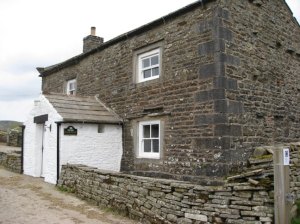 Our route followed a well-worn path in places, but also went through some places which usually would have been bogs but now were quite dry. This made our walk much easier. We were also very lucky that the clouds remained high, so route finding was not much of a problem. We sailed across the fell and down the beck until we came to the first farm houses at Ravenseat. The woman there had put out signs advertising tea and pop and scones, so we ordered tea for two and ate our lunch at the tables outside the house. While we were doing that, the eight-year-old daughter came by and told us about her dog and her school. Before long some other groups arrived to join us.

From there it was a short walk through the fields until we met up with the road to Keld. We walked along the road for a short distance, following the Swale River, before entering Keld. Keld is a tiny village (population 25) with just a few houses, all of which are the gloomy grey stone of the area. It is in the Yorkshire Dales National Park, so there must be some kind of building code because even the newer houses are built out of stone to look exactly like the ones built in 1861. Butt House was easy to locate, so we checked in and put our packs in our room.

It was still early, so we washed out a few things, had showers, then went out for a walk around the village. That didn’t take long at all. Then we sat in the lounge and read newspapers and watched television until dinner was ready. Our table companions were a father and daughter from Whitby, Ontario, who were visiting relatives while walking the C-to-C. We had curried banana soup for a starter, then Rosemary had roast lamb (perhaps a relative of the 100,000 lambs we had already seen) and Paul had chicken in a Stilton sauce. Both of us had sticky toffee pudding, which we rated as 4 out of 5 where 5 was Butharlyp Howe’s version.

1 Response to Kirkby Stephen to Keld