Our beds were very comfortable last night and the duvets warm enough so that we didn’t need the heater on, so we slept very well. Breakfast was at 8 am and consisted of fruit salad, toast, porridge, and tea. The porridge and toast combination was becoming our standard breakfast. We packed our bags, paid the bill, and were out the door at our standard time of 8:45 am.

As usual the weather was cool and cloudy, but not raining. Leaving Orton we followed the main road east for a short while, then went uphill on Raisbeck Road. Our instructions said to continue until we reached Knott Lane, but we found a foot path directing us there, so we took that instead. As we climbed the stile out of one of the sheep pastures we were crossing, we could see another stone circle, better than yesterday’s but still not a major tourist destination.

Today’s walk was taking us up and down over many fields and of course many stiles. Before long we came to Sunbiggin Tarn, a large reedy lake in the heather. Here there was a pair of swans with five or six young, a few ducks, and a heron, but no colony of breeding gulls. From there the direct route would have been to go straight east across the fell, but our book sent us on a long and hilly four-kilometre diversion along the roads. It was only later we found out that the direct route was now a legal route.

Turning east again we passed Ewefell Mire, reduced to a mere damp spot by the dry weather. After crossing several more pastures we found a place where a stone wall sheltered us from the persistent east wind and sat down there to eat our lunch. While we were eating we could see several groups coming across the fields behind us. There were the five British walkers we had met above Hawsewater, the six Americans who had been at breakfast with us, and John with his two lady friends who he had picked up from Kendal this morning.

After lunch we continued on, this time heading downhill to Scandal Beck and Smardale Bridge, quickly catching up to the others. They stopped for lunch near the bridge while we carried on up the other side of the valley. From here we could see the impressive Smardale Viaduct, which had belonged to the now-defunct Tebay-Darlington railway. It consisted of several large stone arches and looked quite out of place in this quiet valley.

From here the path climbed up and over Smardale Fell, with its population of Lapwings. Coming down from there we thought how lucky it was that we hadn’t chosen to walk from Shap to Kirkby Stephen in one day. 25-plus kilometres into the wind with more total climbing than any of the days in the Lake District would have been really difficult for us. As it was, Rosemary’s knee was very sore and she was having difficulty getting over the dozens of stiles. 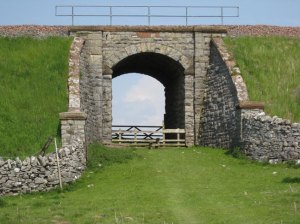 Down in the valley we crossed under a railway line via a tunnel, and after that it wasn’t long until we reached the outskirts of Kirkby Stephen. Our hostess at Lockholme B&B had sent us instructions on how to get to her house, and they brought us there about 2:45 pm. We had a lovely room with a view looking up to the crest of the Pennines and the Nine Standards Rigg, which we would be climbing up to tomorrow. She made us a large pot of tea and a couple of scones for a snack. Once we were settled in, we had showers and then walked the short distance into the centre of Kirkby Stephen.

This was the largest town we had been in since starting the walk, even though it only took about ten minutes to walk from one end to the other. We bought lunch supplies from the local Co-op, took them back to the B&B, then decided we might as well go for dinner. We ended up at the Black Bull hotel. Rosemary had the beef goulash with chips and Paul had the Cumberland sausage. (Last chance, tomorrow’s local cuisine will be Yorkshire pudding!)

Both of us were quite tired, but we did manage to stay up a bit longer. Out of our window we could watch the lambs running about in the pasture across the road. As the evening progressed our view of the Nine Standards Rigg became cloudier, and we hoped that didn’t mean bad weather tomorrow.

1 Response to Orton to Kirkby Stephen