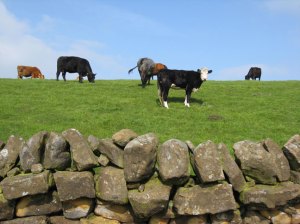 Today was going to be our longest day since the first day of the walk. If it were a stage of the Tour de France, it would be the “queen stage”: very long with plenty of climbing. Neil had looked at the Ordnance Survey map, and he said there would be four ups and downs before we got onto the moors.

After breakfast (cereal and toast) we set off at 8:35 am. Neil had suggested that we should walk as separate parties, we being faster walkers than them, so there was just the two of us. We started up a bridleway which would lead us to the Cleveland Way. The early-morning clouds had burned off and it was quite warm, but in the valley below us it was still slightly misty. Within half an hour we had reached the Cleveland Way, which we were to follow for most of the day. It went through the forest and then plunged steeply down towards Swainby. 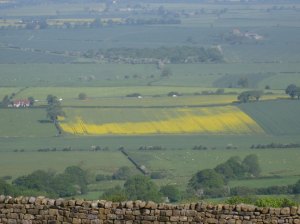 The next uphill section took us through a lovely forest scattered with bluebells and wild garlic. The walk was very enjoyable so far and it was nice to know that we were checking off the ups and downs. At the bottom of the next downhill we crossed the road at Huthwaite Green, stopping to chat with three men who were going out for a walk. We left them still getting organized while we started on our next uphill. This one started out well but soon turned a corner and took us straight up a stone-lined path onto Live Moor. The walk across this moor was very scenic and luckily the mist had cleared, so the views into the valleys were good. 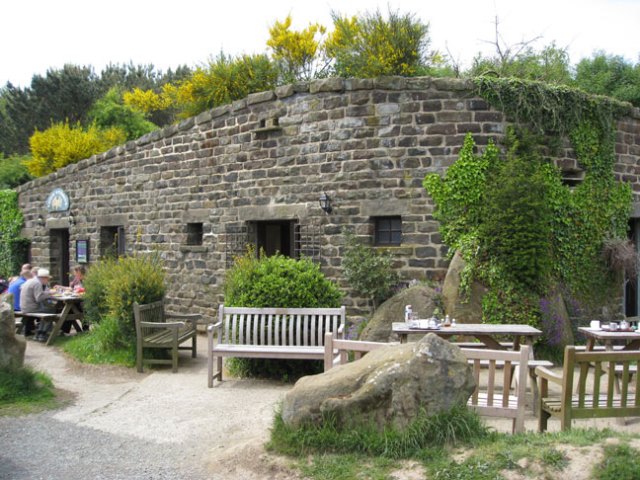 Once again we dropped down and climbed up, and before we knew it we were up on Carlton Moor. Then we dropped down very steeply to the road and the Lord Stones Café, a busy underground establishment where we bought ice cream bars for ₤1 each. Half an hour later we ate lunch at the seat installed in memory of Alec Falconer (“Rambler”), a long-time walker of the area. From this seat the views over north-eastern England were terrific so it was enjoyable just sitting there.

We finally decided to carry on, and as we left we could see Christine and Neil working their way up the hill to the seat. Just after that we met a group of local walkers who told us there were actually six hills to climb over, not four. This was not good news. The next big climb was up to the Wainstones, where we went left of them instead of through them and found ourselves traversing a heather-covered cliff. But scrambling up to the top put us back on course. The path was paved with large blocks and was easy to walk on, but once again it plunged steeply downwards to the Clay Bank Top road. 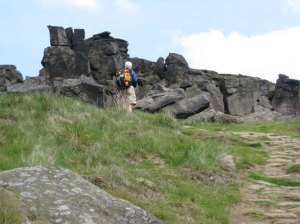 The next (and final) climb was a real killer, as we had forgotten to refill our water bottles at Lord Stones and we were quite thirsty. But Paul found an apple in a corner of his pack, which made an amazing difference. We set off straight across the moor on a wide sandy track. It was still sunny but there was a bit of a breeze to cool us off. Now it was much easier going but there was still a long way to go. We saw a flock of Red Grouse with a dozen or more tiny chicks. Later we saw more grouse and a few Golden Plovers. This path went on for about an hour, after which the Cleveland Way turned off to the left and we continued straight ahead. After another long while we turned off onto an old railway grade which ran across the high moor.

By now it had clouded over and with the breeze it was rather chilly. But we persevered and after another long while the roofs of the Lion Inn appeared, looking rather like a Tibetan monastery, and just after 6 pm we were there. The Lion Inn is no monastery, though, it is a popular roadhouse. The car park was full and there was a line-up at the bar. We threaded our way through the crowd and checked in. We had booked their cheapest room (₤19 per person), which was upstairs. (“Watch Your Head.”) There were twin beds and just enough room to stand up, but that was fine. 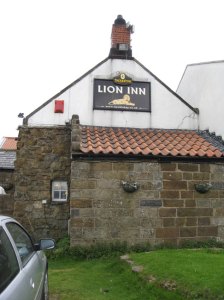 After having our showers we went down to dinner. We shared a giant Yorkshire pudding as an appetizer, and for the main course we both had Barnsley lamb chops which came with chips, peas, and a small salad. The chops were excellent, but trying to eat them tended to scatter the chips and peas all over the place. Especially after a pint of Old Peculier. Both of us were stuffed by the time we were finished. Neil and Christine arrived just as we were being served, just as tired as we were. Back in our room we wrote our journals and went to bed early.