We decided to get up early, as we had a long walk ahead of us. After having our porridge for breakfast we packed up and checked out of the hostel. The beginning of the Great Glen Way was at the Old Fort. From there we went past the roundabout and the shopping centre, then followed a path behind a residential area, close to the shore of Loch Linnhe. The going was easy, with wild flowers beside the path and good views of Ben Nevis. In one field we were lucky to see a sika deer, a species which has been introduced into Scotland. Our first point of interest was the old Inverlochy Castle. It was about 100 metres away from our path, so Rosemary made the short diversion to get a photo before carrying on.

Our walk took us through the suburb of Caol before we turned inland and started walking along the Caledonian Canal. This was a lovely start to the day, with temperatures still fairly cool and level walking. Soon we came to the train tracks and the “Neptune’s Staircase”, a series of six locks which bring canal boats down to Loch Linnhe. By now it was close to 10 am, so we walked part way up the locks and waited to see the Jacobite steam train go by. We waited about 20 minutes, then heard the distinctive chug-chug of the steam train. After taking some photos we got on our way.

It was still a long way to our destination, but at this point we were still not in much of a hurry. Walking along the canal was easy, but became tedious. We stopped at the Moy Swing Bridge (the world’s only double swing bridge) for lunch outsize the lock-keeper’s hut. As we were sitting there the lock-keeper arrived in his Zodiac boat and went into the hut. We heard him talking on the phone in a language definitely not English, so thinking it might have been Gaelic, we asked him where he was from. But it turned out he was from Seville and had been speaking Spanish!

After lunch we continued along the canal towpath to Gairlochy. Here there was a lock connecting the canal to Loch Lochy, but no boats were using it. In fact we had seen almost no canal traffic all morning. By now the sun was very hot and our little thermometer registered a temperature of 27° C. Our route along Loch Lochy started out by going up along a road for a bit, but then it went back down and followed a lochside path in dappled shade. At this point we met the first hiker walking the path in the opposite direction. He was walking from John O’Groats to Lands End, raising money for charity. We told him about the excellent camping site at Moy Bridge and off he went.

There was a bit more road-walking, then we passed the forestry school at Clunes and started along a forest track with no shade. This forest track was very similar to what we would call a logging road in Canada, including the log-transporting trucks which roared past us. The road went up and down past forestry plantations and clear-cuts, and finally at about 5 pm we arrived at the active logging area. The safety man for the site stopped us and told us he would drive us through the part of site where they were loading the cut logs into the trucks. We loaded our packs into his truck, then climbed in. We ended up waiting over half an hour, because they were loading two different trucks, apparently not very efficiently. 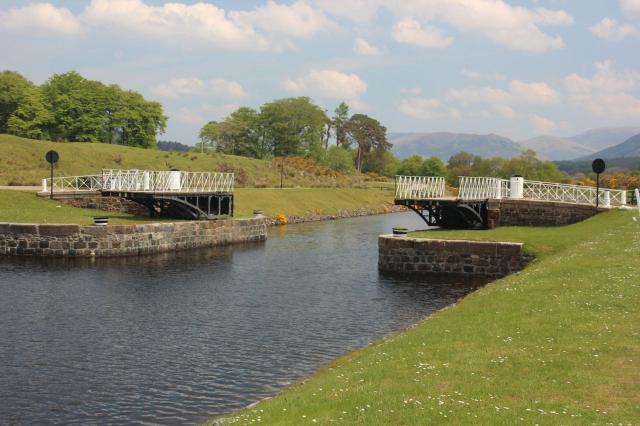 Finally they were finished and the safety man drove us through the mud for about 500 metres and dropped us off at the far side. By now the heat was really getting to us, and we still had at least four miles to go. Finally we arrived at Laggan Lock, at the end of Loch Lochy, having run out of drinking water, but we still weren’t finished. The Great Glen Hostel was another mile up the canal towpath. And then another 300 metres back along the highway. We finally arrived there about 7:30 pm. 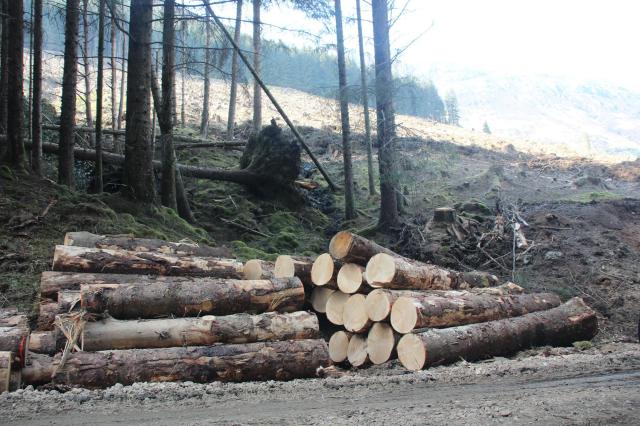 Paul was nearly in heat stroke, so he drank a lot of water to try to rehydrate. We had showers and headed down to the hostel’s self-catering kitchen. We weren’t really sure what we were going to make for dinner, since our food supplies were rather scanty. But luckily for us there were two cans of beans on the sharing shelf, so we had sausages, beans, and a large carrot each. We also bought Cokes from the hostel’s shop, and after dinner we felt much better. Bed time was early so that we could get much-needed rest for the next day.