After spending the night at Caroline’s place we headed off to the Lake District, taking the Northern Line to Euston Station. We caught the 9 am train to the north, changed trains in Preston, and soon arrived in Oxenholme. The weather there was cold and rainy, and our train was a few minutes late, but fortunately the Windermere train was waiting for us. We jumped on board for the short ride. 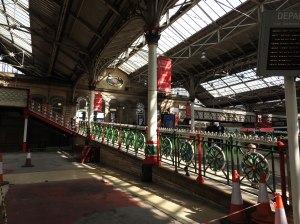 By the time we got to Windermere it was lunch time, so we went into the café by the station. We bought sandwiches and ginger beer and managed to get a table in the small eating area. We still had a fairly thick cloud layer with possible rain in the forecast, so we got our rain gear ready before leaving. Outside the café our bus was just about to leave, and after some discussion with the driver and the ticket seller we decided that we would start our walk to YHA Langdale, our hostel which was halfway between Grasmere and Elterwater, from White Moss Common.

The bus took us through Ambleside and past Rydal, an area which was very familiar to us, so we knew exactly where we would get off. By the time we got to White Moss Common the rain had stopped, so we didn’t need to put on our rain gear. We headed up to Loughrigg Terrace, which overlooks Grasmere Lake, and followed it up to Red Bank Road. Once we were on the road it was only a short way uphill to the hostel; total walking time only 37 minutes according to Strava.

(We noticed that our bus driver pronounced “Loughrigg” as “LOFF-rigg”. We had always thought that it was “LOW-rigg” but obviously we were wrong.)

The hostel is a big old stone building at High Close, with views in all directions. The reception wasn’t open yet but the door was unlocked, so we went in and found the common room, a big area with a lot of old leather armchairs. It had working wi-fi (once we signed up for The Cloud) so we made ourselves at home with some tea. When the reception opened we went through the formalities; all the private rooms were booked up so we were in the dorms. But since we were early we had a good choice of beds. Both the men’s and women’s dorms had a view down towards the lake at Ambleside. 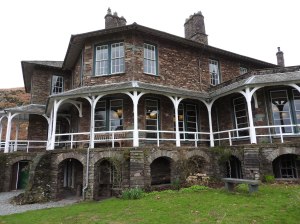 It was now only 4 pm and dinner wasn’t until 7 pm, so we decided to walk down to Grasmere to buy some gingerbread. We retraced our route along the Terrace and then crossed the bridge to head into town. Fortunately the gingerbread shop was now open until 5:30 pm so we were in time to buy our gingerbread fix. We went into the Wordsworth gardens to look at all the daffodils, which were now in full bloom all around the area, and sat on a bench to enjoy a piece of gingerbread. As we sat there a cute little robin hopped down, hoping for some crumbs, but he was out of luck.
Our route back to the hostel took us up Red Bank Road, which went by some lovely houses and cottages. We got back around 6 pm so there was plenty of time before dinner.

We had signed up for dinner at the hostel, rather than cooking our own food (didn’t feel like it) or going out for dinner (no car, too far to walk). Today’s dinner was fish and chips, with actually a pretty good fish. We sat at a communal table with about 10 people; we had seen several of them earlier, shooting arrows at targets. It turned out that they were taking a course, learning how to be archery teachers. Besides them there was a couple with two nine-year-old boys who liked drawing and doing mental arithmetic. Dessert was blackcurrant cheesecake with ice cream, definitely worth the £8.75.

Today’s weather forecast was for almost no rain, which was a forecast we liked. It was still mostly cloudy but that was all right. After finishing our English breakfast we organized our packs, including the packed lunch which we had ordered along with some Mars bars and gingerbread to augment it.

From the hostel we headed out along Red Bank Road and then turned right onto the fells, following one of the many paths which we saw there. Our plan was to walk along the long ridge to the north, ending up maybe at High Raise which is located near the Langdale Pikes. Most of the path along the ridge was well-mapped, but various maps showed various confusing networks of paths near High Close. However by carefully choosing the right paths from our GPS map we made our way to Silver How, checking off our first Wainwright of the day! 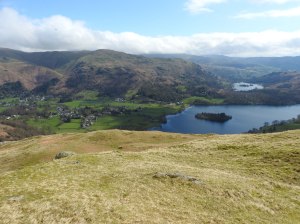 View from Silver How

From here we followed the trail to Blea Rigg (another Wainwright!), a trail which was much easier to follow. Not only were there many fewer paths heading off in random directions, there were several other hikers who were going the same way as us. Several boggy sections had us finding alternative routes, but for the most part the trail was good. By lunch time we were somewhere on Blea Rigg so we found a nice spot to sit and eat our BLT sandwich.

Our next destination was Sergeant Man, a higher bump which we could see in the distance. We had to drop down a bit and then climb back up to it. By now we had good views of Pavey Ark and the other Langdale Pikes, with Stickle Tarn at their base. Once on top of Sergeant Man we had more tea and also some gingerbread and a Mars bar. But now what next?

We could drop down to Dungeon Ghyll, where we could catch a bus back. Or we could find a route down to the head of the valley leading to Grasmere. From the map it looked like there were a lot of ups and downs on the way to Grasmere, so finally Dungeon Ghyll won out. But not by much. We headed that way, diverting via the really easy walk to High Raise. It was getting late, so we headed back directly towards Pavey Ark, then down a steep gully to Stickle Tarn, then down the steep path to Dungeon Ghyll. By the time we reached the bottom our legs were like jelly!

By the hotel we found the bus bench and as luck was on our side, the bus arrived within 10 minutes. (Later we looked at the timetable and found that the next bus would have been two hours later!) We told the driver we were going to the Langdale YHA and he said he’d let us know when we got to our stop. It was lovely travelling on the bus, which made short work of the distance. We still had to do the steep climb up the road to the hostel, but we did that quite quickly and arrived in plenty of time for dinner. 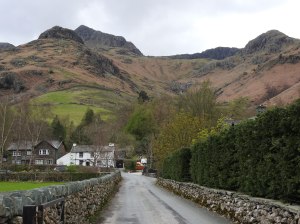 Tonight’s dinner was sausage, so we had ordered one Cumberland sausage and one Glamorgan sausage, to have a variety to share. But it turned out that the Glamorgan sausage was a vegetarian sausage! Not quite the variety we had expected, but it was actually very good. Dessert was apple crisp with custard and we both felt we deserved the large meal after our long walk.

We woke up to overcast skies with rain in the forecast, so since we were a bit stiff from yesterday’s walk we decided to have a more relaxing day. So rather than climbing more Wainwrights we headed down to Grasmere. We weren’t sure what we would do once in the village but figured something would come up.

As we approached the village we decided to take the river walk, which ran alongside the River Rothay. There were lots of daffodils in bloom, which made the walk very colourful, but there were also a few places which had been damaged by last winter’s floods. Soon we ended up at Sam Read’s book shop, which had a good selection of walking books. Our dinner-table mates from last night had shown us the walking book they were using, and it looked interesting, but we ended up buying the Footprint map of fourteen walks around Ambleside, Grasmere, Langdale, and Elterwater.

Daffodils by the River Rothay

Walk number 3 was a short walk to Easdale Tarn; it started on Easdale Road, which was right across the street from the book shop. We figured this would be a good rest-day walk. It was a nice walk up through the fields, with cute baby lambs, and then we left the fields and headed up into the fells. There were still sheep there, but not with babies. The route was easy to follow, as it climbed up beside Sour Milk Ghyll, and we got to the tarn at lunch time.

Even though it was cloudy, there was a pretty reflection in the surface of the tarn. We sat down to eat our lunch and the predicted rain started; at least, we could see raindrops in the water but they were so small that we couldn’t even notice them.

After lunch we continued to the end of the tarn, found a suitable place to cross the creek, and then walked along the opposite shore. There was no real trail to speak of; just sheep trails through boggy places. But nearing the outlet we got onto a better path. From there we followed our map and went down through an area called Far Easdale. Along with the sheep there was a big group of students apparently practising their surveying techniques. After that it didn’t take long to walk back down through the farms back to Grasmere. 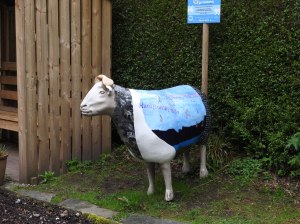 Earlier we had seen a painted sheep next to Dove Cottage, and then in a shop near the green we saw another one. (These were plastic sheep, not the woolly kind.) It turned out there was a fund-raising project where artists painted these Herdwick (“Herdy”) sheep. They would be displayed in several towns in the Lake District for a while and then auctioned off to raise money for a charity which delivers challenging outdoor activities for those with disabilities. The sheep we had seen near Dove Cottage was titled “Herdy Mercury” and its artwork involved several (modified) Queen song titles. We whiled away the afternoon looking for other painted sheep in Grasmere; one had been painted by local school children and was in the church next to the font.

After sitting on the green and finishing our tea we headed back to the hostel, following the now familiar Red Bank Road. Surprisingly we had walked over 18 km, farther than yesterday, but still it was an easier walk. As with other nights our dinner was really good, chili and rice and chips and salad plus extra salad—a very filling meal followed by chocolate mousse with fruit and cake. We sat with the same family who had been there last night, so we caught up with what they had done today.

Next: Walking between hostels