We caught the 3 pm ferry from Yell to Mainland and headed towards Hillswick. Tonight we were staying at Almara B&B in Upper Urafirth, near Hillswick, and we had instructions on getting there but they were based on coming from Lerwick. So we made a wrong turn, or failed to make a correct turn, and ended up at the oil terminal. However we figured out where we needed to go, turned around, and then it was quite easy to find Marcia’s place after all.

We hadn’t really noticed that the clouds were thickening but just as we arrived at the B&B the drizzle started to fall. But it was only drizzle, nothing serious. Our room was quite large and we had plenty of space to unload our stuff, so we got settled in and made some tea.

The only drawback of staying here was that there were no restaurants within walking distance, so we would have to drive somewhere for dinner. There weren’t many options, so we decided Frankie’s Fish and Chips in Brae would be okay. But when we got there at 5:30 pm their tables were all booked up and they couldn’t seat us until 7 pm. We hadn’t expected that! So for Plan B we went back to Hillswick, to the St. Magnus Bay Hotel. In hindsight this turned out to be a good choice because Rosemary could just have a large bowl of soup.

We went to bed early, hoping to catch up on some of last night’s missed sleep.

Rosemary had a good night’s sleep last night so today she felt more alive. Still not well but at least able to function. We had breakfast at 8 am, as this was the latest that Marcia would serve guests; there were three other guests so we met two Americans from Virginia and Stefan from Germany. Stefan was cycling the North Sea Cycle Route and the Americans were struggling with the standard transmission in their rental car! We had a pleasant time chatting with everyone while eating our tasty breakfast.

Ringed Plover on the beach

After breakfast we drove down to Hillswick, planning to walk the circular path around Hillswick Ness. But part of Hillswick was closed off because they were filming part of an episode of the TV show “Shetland”. But the car park guy said it was okay to park down at the end past all of their vehicles, and that worked fine for us.

We went on the walk first because the weather was reasonably good. And we had parked right by the old manse, which is basically where the path starts. There isn’t actually a path as such around the point, but the route is easy enough to follow: water on the left, land on the right. The terrain was easy to walk on as well because previous walkers had left a track of sorts to follow. So we weren’t floundering in any bogs.

The cloud cover was fairly low so anything in the distance was obscured, but for looking at birds this was fine. Every little geo (small bay with cliffy sides) had a group of fulmars sitting there, possibly nesting but we couldn’t tell. By the end of the walk we had counted over 300 of them! We didn’t see any puffins, though, and later our hostess Marcia told us that there weren’t enough fish locally to support them. 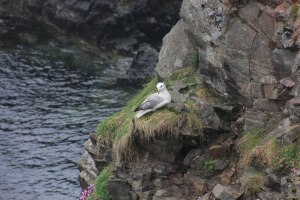 Fulmar on the cliffs

As we walked the clouds over the hills started to clear and the sun came out a bit, so that made the walk even better. We passed the lighthouse and then came to a geo with a view of a tall sea stack. We’d seen a picture of this stack at our B&B. Farther out was a strange-looking multi-pronged sea stack which was named The Drongs. Such a cool view!

The walk was only 8.2 kilometers so we got back to Hillswick in time for lunch. We stopped in at the little store and bought some juice boxes, crisps, and some Orkney cheddar biscuits. By now it was sunny so we sat down at the water’s edge next to the film shoot and ate our lunch. The film shoot consisted of a crew of about 30 people filming about 30 seconds of dialog. After they were finished, things went back to normal and a woman came out to let her little dog charge along the beach.

For dinner we went back to the St. Magnus Bay Hotel’s restaurant. Tonight Rosemary had the lamb shank and Paul had fish and chips. We splurged and had sticky toffee pudding for dessert, and it was actually quite good. Next to us was a man who was also at our B&B. He was from Inverness and he was here to climb Marilyns. Today was Ronas Hill, tomorrow would be Vord Hill on Fetlar. He was rather apologetic about it but we assured him that we understood obsessive listing activities!

We were up early to have breakfast at 8 am, then we packed up our bags and said goodbye to Marcia. We were heading back to Lerwick for a few days before flying to Fair Isle, but not until later in the afternoon. Our plan was to walk around Esha Ness, which was not far from the B&B. The day was looking good so far and Marcia told us that the forecast was for warm weather, perhaps with record high temperatures. (That would mean 19°C in this area.) 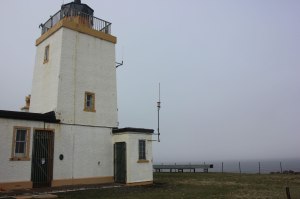 The start of our walk was at the Esha Ness lighthouse. We got started at 9:30 am and walked along the edge of the cliffs, which were very wild and spectacular with many and varied geos cutting into them. There were lots of birds (mostly fulmars) and several wildflowers. At the end of the cliffs we came across a group of kittiwakes. They have been in decline for a while and so we were glad to see them: they were the last regular seabird species missing from our list! 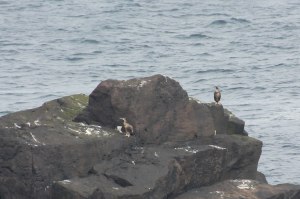 Cormorant with young of the year

From the small hamlet of Ure the route took us along a minor road, which eventually led across the peninsula to Tangwick. There we found Tangwick Haa, a former laird’s house which had been converted into a museum. We went into the museum to use the toilets but, more importantly, to get a cup of tea. We made the tea and got some biscuits, left a donation, and went outside to set at a picnic table in the enclosed garden. By now we were hungry so the tea was very welcome.

The lady in the museum was very friendly and welcoming, but in the end we only bought a tea towel from the gift shop. The museum was well done; there were three areas upstairs. One was arranged like an old general store, another like the laird’s sitting room, and the third was devoted to some of the locals. Especially to local boy Tom Anderson who became a big name in Shetland fiddling.

The next section of our walk had us walking along the coast back towards the lighthouse. For once we found that we were too hot rather than too cold! And when we got back to the lighthouse, avoiding the area being defended by terns, we found a number of other tourists there. This was also a new concept for us, but then today was the Friday before a long weekend.

The drive back to Lerwick was a bit tedious, but fortunately it was only 30 miles so it didn’t take long. We checked into the hostel, headed over to the Co-op to buy groceries, and made dinner before the rush started. It was lucky that we did that because there was quite a large group making dinner after we were done. We also did some laundry, so now we are stocked up with clean clothes.