This morning we were finished with Bath museums, so after breakfast we were off to Wells Cathedral. The day was overcast and a bit drizzly, so indoor activities seemed the thing to do. The drive to Wells took about half an hour, so because we were early we got a parking spot right beside the cathedral.

The cathedral authorities charge £3 for the privilege of taking photos inside, so Rosemary paid the fee and got a sticker to wear. (We joked that this was her “press pass”.) There was a guide waiting to give a tour, but so far he had no clients. This was great for us because he gave the four of us a tour by ourselves. The cathedral is quite amazing, one of the best in Britain. We had already seen the west side, which is completely made up of medieval sculptures of biblical scenes, kings, bishops, angels, and the Twelve Apostles with Christ at the top. The inside was equally elaborate, but now we had a guide to explain it to us. 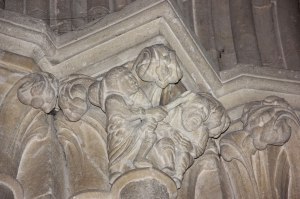 Touring the cathedral with a guide was very good because he pointed out various aspects of the building that we would never have noticed. For example he pointed out the small sculpture in one corner of the cathedral which is believed to represent the head of the chief mason, who died before construction was complete. And the modern-looking “scissor arches” were actually installed in the 14th century to shore up the walls after the tower was enlarged.

At lunch it was still drizzling a bit, so we had our picnic lunch in the car. After that we went back in to watch the astronomical clock strike the hour. Besides just ringing the right number of bells, the clock also has jousting knights who ride around in a circle. It was amazing to watch the clock at work and to realize that it too had been built in the 14th century, cutting-edge technology for those days. It would have been a huge advance over the sundial. We had a quick look at parts of the church we hadn’t visited before, and then made our way to the gift shop. 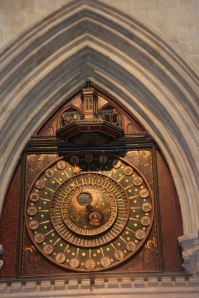 We had a quick look at the town centre of Wells and at the grounds of the Bishop’s Palace, then met up with Neil and Christine back at the car before heading for Glastonbury. That was only about ten minutes away, and once there Neil and Christine went off to walk around the village while we went into the abbey. This was quite different from Wells Cathedral: Glastonbury Abbey is a ruined abbey, quite similar to Hailes Abbey, which we had visited while on the Cotswold Way. But Glastonbury Abbey has legends attached to it related to King Arthur and Joseph of Arimathea, so the car park was full of giant tour buses. We wandered around the grounds for a while, and then because the sun had come out and it was getting hot, we decided to have an ice cream. The little café in the grounds had Marshfield Farm, a local brand, and it was really good. Rosemary had toffee crunch and Paul had chocolate fudge. 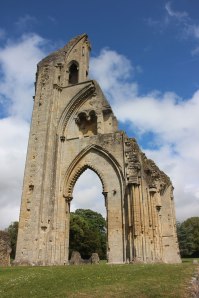 We had a brief look around the village of Glastonbury. There were Buddhist and Sufi centres and lots of shops selling crystals and mystical items. Probably there were some hippies there somewhere. But we didn’t stay to shop, because at Wells we had been told that the girls’ choir would be singing at 5:15 pm and Christine wanted to go to the concert. So we met Neil and Christine in the car park and headed back to Wells.

The concert turned out to be not quite a concert, but the regular daily Evensong service. The service was interesting to watch, very formal with pomp and circumstance and incense. Sitting there was very calming, with the choir singing and the large pipe organ playing. And the choir did a good job of some rather challenging music. 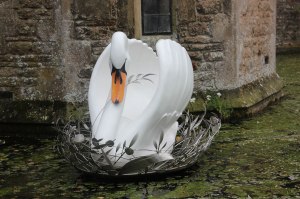 It was now dinner time, so we stayed in Wells to eat in one of the pubs. We shared a three-course meal, with Rosemary having the starter of soup and bread along with a side of chips, Paul having the main, and the two of us sharing apple crumble for dessert. The service was a bit uncoordinated, with different bits of different people’s meals arriving at various times, but the food was good.

Previous: Bath
Next: Off we go to Wales