We got up earlier than usual today, as it was to be a long day on the Cumbria Way. We took our bags down to the reception area for Sherpavan to pick up, handed in our keys and rented towels, and were ready to go quite a bit before 10 am. Weather-wise, it looked as if we would be in luck with no rain, at least for the morning. 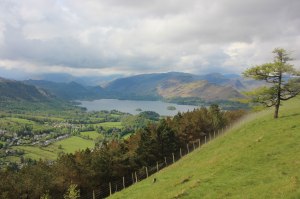 Since we hadn’t climbed Latrigg on the day we did Skiddaw, we decided to do that today, since it didn’t add any extra elevation gain to our walk. However we did it in the worst possible way, by climbing straight up the steep side facing Keswick. This side was far too steep and we would have been better off just going to the official starting point and cruising across the summit plateau. Finally at the top we looked back at Keswick for the last time, then headed over to the car park to carry on.

Our route now diverged from the route up Skiddaw. It contoured around the Lonscale Crags on a gently rising slope, then went up a long valley. From here we could see the back side of the Blencathra group of fells, which looked easy to ascend from this side. After a couple of hours of this trail we arrived at Skiddaw House, a stark grey box sheltered by a small patch of trees which are the only ones in the Skiddaw Forest. In its former life Skiddaw House was a hunting lodge, and then a set of cottages for shepherds. Nowadays it’s the highest youth hostel in Britain. We went over to have a look, but it was locked until 5 pm.

This was our decision point: should we take the high route over High Pike or the low route through Orthwaite? Since the fell tops were (except for Blencathra) clear of mist, we decided to go for the high route. The next section had us walking down the broad valley of the River Caldew. It was muddy in spots, and we met a group of young people carrying large backpacks and a family of mountain bikers. We stopped halfway for a bit of lunch and to put on rain gear, and after a couple of hours we got to Grainsgill Beck, where that trail came to an end.

From here we followed the beck uphill towards the Lingy Hut, which was visible on the horizon as we started. This was the only real climbing we had today, except for at the very beginning. We passed the site of the Carrock Mine, where they used to mine tungsten, right away, and then continued to follow a rough track up the valley. This track alternated between boggy bits and rocky bits as it ascended beside the gill. Finally after about 45 minutes we were near the top, so we angled off across the heather and finally reached the Lingy Hut.

Originally the Lingy Hut was a grouse-shooting box, but now it serves as a rest stop and refuge for hikers. The rain was falling harder now, so we sat in the hut and had tea and a Mars bar before continuing towards High Pike. Just after we left the hut a fell-runner stopped to talk to us for a moment, then he was off, and the last we saw of him was on the summit of High Pike, which wasn’t far away. The final climb was just a walk-up over grass, so we quickly reached the top. High Pike is the highest point on the Cumbria Way, but just as we arrived there the clouds started to come down so we didn’t linger. We made our way carefully down the grassy slope, past disused mine shafts which were fenced off, and then came to a wide track.

Our guidebook said only to walk down the fellside until you reach the track leading to Nether Row. However if you don’t happen to hit that track precisely then you are out of luck, since the map in the book doesn’t look much like the actual features on the ground. That’s what happened to us. We decided to follow the track in one direction, which we soon decided was wrong, then we followed it the other way until we saw a path going down among old mine workings, just as the book said.

Little did we know that there were two such paths, and we were on the one which came down into farmland about two kilometers east of Nether Row. From there our trusty Ordnance Survey map led us through never-used rights of way through lumpy and boggy fields and over several ancient stiles until we finally arrived in Nether Row. This was a very tiring and frustrating waste of time. But here in Nether Row there were two Cumbria Way waymarks! However they were both pointing southwards on the two routes going back to Keswick. So we set off on the road with no waymark, asking a woman in a car if we were really on the way to Caldbeck.

We had picked the right road, so off we went downhill towards our resting spot for the night. It seemed to take forever to reach the village, but at last we made it. However our B&B was not in Caldbeck. We had instructions telling us to follow a riverside path past the ruined bobbin mill. Our B&B was about a mile along this path, so we had a pleasant but tiring finish to our walk before reaching Swaledale Watch. “Oh yes,” said our hostess Nan casually, “everybody gets lost coming down from High Pike.”

We put on some cleanish clothes and then walked (along the road) back to the village pub for dinner, then back to the B&B. The meal was really good and the walk pleasant, but now we were ready for bed.

Previous: Keswick
Next: Caldbeck to Carlisle