Ulverston is the starting point of the Cumbria Way, so we based ourselves there for a couple of days before starting the walk. The B&B we stayed in was Church Walk House, with friendly and helpful hosts John and Martin.

We arrived in Ulverston by bus from Windermere in the early afternoon. After settling in at the B&B and having a cup of tea, we decided to go out for a walk. On John’s advice we headed up the hill to the Hoad Monument.

(The Hoad Monument is a 100-foot-high replica of a lighthouse which stands on top of the hill outside the town. It was built in honour of local boy Sir John Barrow, who directed much of the exploration of the Northwest Passage from his office in London.)

After walking up Church Street and following the signs to the base of the hill, we climbed up the path which took us through sheep fields and a few gates. Here there were gale-force winds from the west which almost blew us over at times. The views were quite good, at least to the south across Morecambe Bay. However towards the Lake District in the north we saw masses of black clouds which looked very threatening. Hopefully by the time we start the Cumbria Way the weather will improve.

From our viewpoint on the hill we had a good view over Ulverston, so we decided to continue on down the other side of the hill and head towards the canal. We had a good idea of where the canal was so with the help of the GPS and some guesswork we walked along a few streets before finding it. The canal was built in 1796, but once the railway arrived in the 1850’s the canal became obsolete. Today it is closed off from the sea and has a walking path on one side and a GlaxoSmithKline plant on the other.

It took us about half an hour to walk down to the bay, and from there we walked back through the industrial and residential areas to Ulverston. We had booked a table at the Rose and Crown pub for 6:30 pm, so we had time to have a look at the Laurel and Hardy statue. Dinner was really good and we had been warned that the servings were very large, which they were! 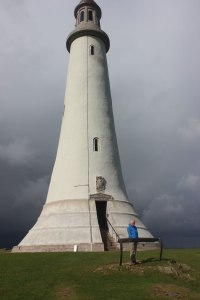 This morning after breakfast we set off for a day trip to Furness Abbey, down the road near Barrow-in-Furness. We caught the bus going to Barrow and got off at the bottom of the hill outside the Abbey House Hotel. This was built by the same architect who built Castle Drogo in Devon, and it did look remarkably similar. From behind the hotel a path took us downhill towards the Abbey.

Down in the grassy valley we first found a small ruined chapel and then, a bit farther along, the main part of the ruined abbey with the entrance building in front of it. The entrance building looked rather closed, and on closer inspection we found that it was indeed closed. At this time of year it was only open from Thursday to Monday, and here it was Tuesday.

But in the parking lot there was a man putting on his hard hat and reflective vest. He was one of English Heritage’s consulting archeologists who were working on an emergency restoration project to shore up the abbey’s foundations. Once we told him this was the only day we could be there, he proceeded to invite us into the site as long as we promised not to have an accident or fall into the beck. Some of the other workers looked surprised to see us, but he explained our presence and then took us closer to the ruins and told us a bit about the Abbey. It was built in 1123 by Stephen, count of Boulogne, who passed it to the Cistercian order in 1147. They upgraded it over the centuries and by the 15th century it was one of the most powerful Cistercian abbeys in England. However it was destroyed in 1537 during the Reformation of Henry VIII.

After walking round the Abbey we exited through the chain-closed gate and made our way to the road which ran beside the Abbey grounds. We had found a walk in an AA book of British walks which started in Dalton and looped in a circle past the Abbey and back to Dalton, so we started at the Abbey and followed the loop. It led us on little-used public rights of way through pastures full of sheep and their lambs, through the small village of Newton, and along obscure country roads and even an old mine railway bed before arriving in Dalton. We walked to the end of the main street to see Dalton Castle, which turned out to be a large square building which looked nothing whatsoever like a castle. It was only open on Saturday afternoons, so we walked back to the main bus stop in town and caught the bus back to Ulverston.

Next stop was the Laurel and Hardy museum. Stan Laurel was actually born in Ulverston, under the name of Stanley Jefferson. The museum had furniture from the house he lived in as well as many photos and memorabilia. The centrepiece of the museum was a small area where all of the pair’s films were being shown. We watched two of them, laughing out loud. One was “Towed in the Hole” where they buy a fishing boat and manage to destroy it, and the other was “The Music Box”, where they try to deliver a piano up a very long flight of stairs. This was the only movie they made which earned them an Academy Award.

For dinner we went to Naaz, an Indian restaurant just down the road, on the recommendation of our host Martin. Rosemary ordered South Indian garlic chicken and Paul had a tandoori mixed grill, both of which were very good. And we shared a frozen coconut ice cream for dessert. 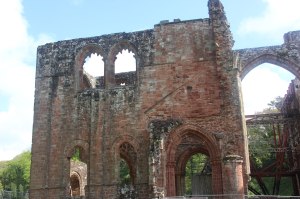 The plan for today was to take the train to Silverdale, where the Leighton Moss RSPB site was located. We had to rather rush off after breakfast to catch the train, but as it turned out we were in plenty of time. The train ride was lovely as it went along the shore of Morecambe Bay to Arnside, then through some pastureland, then back to the water for a short time before reaching Silverdale. The walk to Leighton Moss took only about ten minutes.

Because we had arrived by public transport our admission to the reserve was free, which was a nice perk. The reserve is a wetland area with swaths of reedbeds, with very good trails and very fancy hides. All of the hides looked quite new and were built with pine interiors and double-glazed windows which opened easily. And luckily the weather was reasonably good, not as fine as yesterday but with only the occasional rain shower.

The commonest species was the Black-headed Gull, with noisy nesting flocks numbering in the hundreds, but the star species was the Marsh Harrier. We saw two of them, and one of them had caught something with long drooping legs which it carried around for quite a while. As for other star species, because of the cloudy weather neither the Bearded Tit nor the Bittern were anywhere to be seen or heard.

We walked to the more distant hides in the morning, then returned to the visitor centre where we had lunch at their café. We were supposed to meet Dave and Edith Brown (of the Wainwright’s Wanderings website) at 1 pm, but we gave up when they hadn’t arrived by 1:30. Later we discovered that he was waiting for a delivery which didn`t arrive until much later in the afternoon.

After we had finished with the main section of the reserve, we decided to walk down to the other two hides which were located by the shore of the bay. Unfortunately this required a two-kilometer walk along the side of the road, but when we got there we found lots of Avocets! With chicks too! The chicks were little fluffy balls with long legs, but not with the long bills of their parents.

While we were in the brand-new Eric Morecambe hide (just opened last year) there was a short hailstorm with strong winds. So we waited that out in the hide before heading back up the road and catching the train back to Ulverston. This time the train was not very full, so we got seats on the left-hand side for a better view of the bay.

Back in Ulverston we went for dinner at the Rose and Crown again. Rosemary had her favourite lamb chops and Paul had a Thai red duck curry. 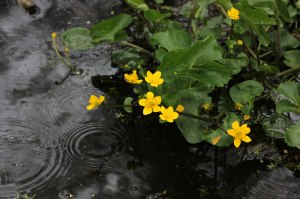 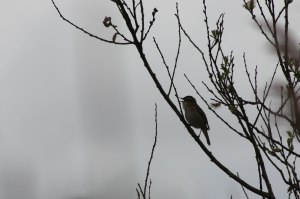 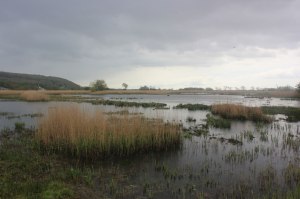 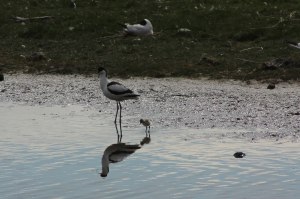 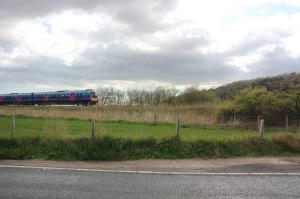 Previous: Ambleside
Next: Ulverston to Coniston