This morning we were scheduled to go on a raptor ID tour of the Bosque, leaving at 9 am. We got to the refuge a bit before that, so that Rosemary could buy a hat to protect herself from the unexpected sun. (After yesterday’s boat tour she was a bit sunburnt.) The bus was a bit delayed, and while we were waiting for it we found that several of the people from the boat tour were also booked to this tour.

The tour went around the south loop of the refuge’s road system, stopping whenever somebody saw a large bird and shouted “Stop”. Although it was officially a raptor tour (i.e. hawks and falcons) the first bird we stopped for was a Loggerhead Shrike. Nearly a raptor anyway. Raptors were surprisingly scarce; most of what we saw was either a Harrier or else something flying at a great distance away. Although we did see a nice Kestrel perched on a tree. And it was interesting to see the very dark colour of the Harriers down here compared to those back at home. 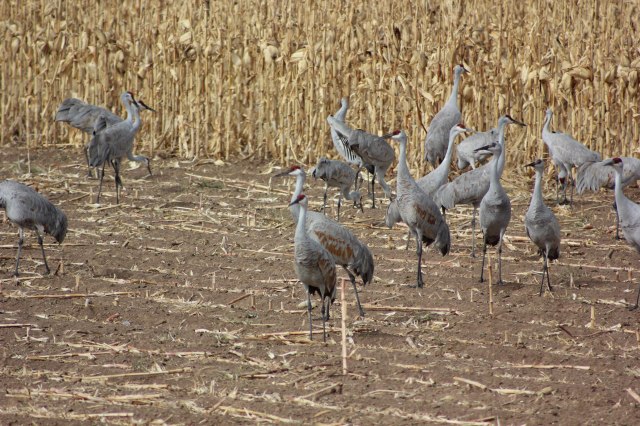 The tour ended at 11:30 am, so we had lunch at the picnic tables at the visitor centre. By now it was getting warm and we didn’t need the warm clothing we had put on first thing in the morning. We decided to spend the afternoon driving around the north loop of the refuge. So we paid our $5 at the entry station and started out.

A couple of hundred metres down the road was the Boy Scout viewing platform, which overlooked the lake where a few thousand Snow Geese were hanging out. There was a volunteer there, and we mentioned to her that we really wanted to see a Roadrunner. She implied that they were as common as dirt in this area, and in fact… there was one just down the road, who would run up onto the road to catch bugs and then return to the side. Sure enough, there he was! But before Rosemary could get the camera pointed at him, a car went by and startled him, so she had to go quite a way down the road before he settled down to have his picture taken.

Shortly after that we found a falcon which turned out to be a Prairie Falcon, and then we saw a very large dark bird which flew away into some large distant trees. We thought it might have been a juvenile Golden Eagle, but by the time we got a good look at it, all we could see was the tip of its tail. So we had to put that down as “don’t know”.

All along the road there were fields with lots of Sandhill Cranes and various ducks feeding. It was a nice way to spend the afternoon, the sun by now was quite warm. The volunteer at the visitor centre had told us that javelinas (wild pigs) had been seen near the end of the loop, so we were watching out for them. But we never saw any. Back at the end of the loop we stopped for a bit to watch the Snow Geese, and then headed back to Socorro.

The half-hour drive on the interstate went by quickly. Dinner was spaghetti with sauce and a salad tonight.

November 15: Fly Out At Sunrise