It was close to lunch time, and we saw “Manton Dam Recreation Area” on our map, so we decided to have lunch there. This dam and reservoir were built in 1942 as the water supply for Darwin, but now they are used strictly for recreation. There was a large car park, but except for one other person we had the place to ourselves. Heading north again we saw “Charles Darwin National Park” on the map, so we decided to see what that was. Getting there involved high-speed city driving on the Tiger Brennan Highway, but by now Paul was used to driving the van. 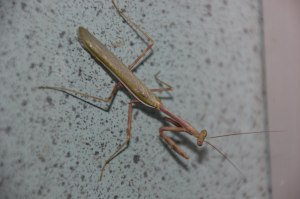 We were surprised to find the park behind a fence which was locked at sunset. Then we were surprised again when the first thing we came to was a World War II bunker. During the war the area had been used as a bomb-storage site, and there were interpretive displays in the bunker about Darwin and its strategic location during the war. It was quite amazing to read about those years and about the intense battles with the Japanese. Before leaving there we stopped by the picnic area, which had a view over the mangroves towards the city. We hadn’t really seen it before, having flown in at night, and we were surprised by all the tall buildings and cranes there. 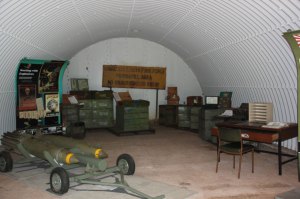 It was still early, so we made our way to the Botanic Gardens. After two attempts at finding the entrance, we picked up a map from the interpretation centre and went for a short walkabout. But the mid-afternoon heat and humidity was too much for us, so we gave up on that and went looking for a place to camp. Our maps directed us to the Shady Glen caravan park, which was quite close to where we would drop off the camper van on Saturday. It had been taken over by the Discovery Park chain, and the first thing we noticed was the lovely swimming pool, so that settled where we would spend our last two nights in the Northern Territory. 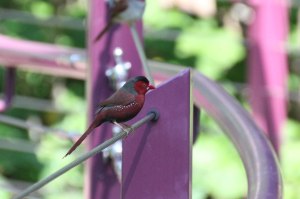 After checking in we followed the directions to our sign and got settled in. Not only is the campground for tourists, but it’s also a semi-permanent home for a variety of other campers. The first order of business was to go swimming. The pool water was actually quite warm, but it was refreshing and so we stayed in for quite a long time. For dinner we decided to finish up all the vegetables we had and then see if we could find a fish and chip shop for tomorrow night, for our last meal in Darwin.

There were very few bugs around, so both of us sat outside after it got dark. While were sitting there we were pelted with fruit from the tree above us and also with some brown lumps which we thought might be nuts or seeds. And then two furry animals climbed quietly down the trunk of the tree—they were Ring-tailed Possums.

We went to bed about 10 pm, and soon after that we could hear a discussion between the guy down the road with the loud music and somebody else. Eventual result: Loud Music Guy departs and the campground is quiet.

At 5:30 am we were woken up by rain falling on the van. We closed the windows so the rain would stay outside, but within a few minutes the rain stopped, so we re-opened the windows and went back to sleep. We got up at our usual time, breakfasted, and headed into town along the Stuart Highway. Exploring Darwin was on today’s agenda, and our first destination was East Point. This is a beautiful park with lots of green grass and a coastal walking/cycling path. We drove all the way through the park past the Military Museum to the far end and parked by the shoreline. 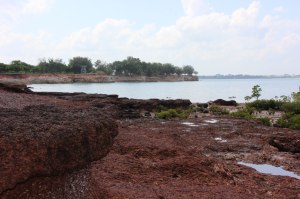 The morning was overcast and therefore a bit cooler, and it was also made cooler by a mild ocean breeze. The tide was out, so we headed down onto the rocky sandstone beach to check out the birds. There were a lot of birds at the point. Out on the rocks were various shorebirds and herons, and in the bushes there seemed to be different kinds of honeyeaters wherever you turned. We walked down the coast a bit towards Dudley Point, looking at birds and old coastal fortifications. The whole point was a strategic fortification during World War II so there were gun emplacements and towers for radio transmission, all in a state of decay. 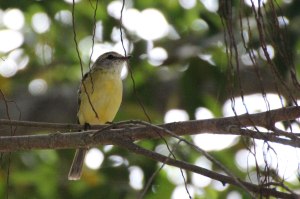 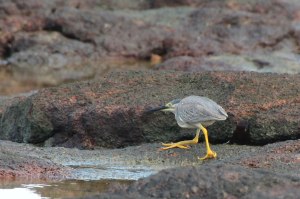 We returned to the camper van for a drink of water, and then headed back to the other end of the park, where there was a short boardwalk through the mangroves. Although it was very hot it was short enough for us to walk, so off we went. Part of the walk was a sandy path and the rest was a raised metal boardwalk. The tide was still low so we didn’t really have to worry too much about crocodiles, but we did keep our eyes open. We saw some crabs with large orange and yellow front claws, but nothing else in the mud below us. At the end we could see out into the mud flats, and there were also a few birds in the trees. It took us quite a while looking at one of them to provisionally identify one as a female White-throated Whistler. 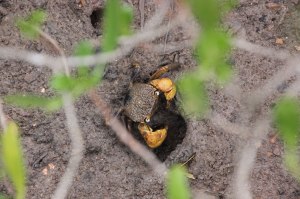 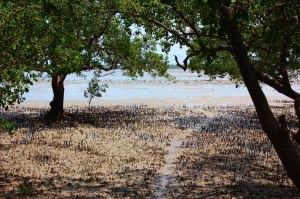 Back at the car park we decided to move to a shadier spot for lunch. But while Paul was backing out of the parking spot, unbeknownst to us a car had parked directly behind us, so he bumped into its bumper, causing a very small scratch. This car was actually being driven by the sister of the owner, so we exchanged names and got the owner’s phone number so we could call her. We didn’t expect her to make a big deal out of a tiny scrape, especially since her car already had two other much larger dents, but we wanted to make sure. 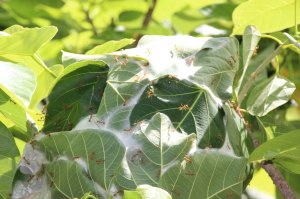 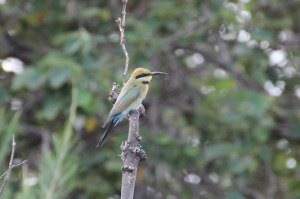 We headed back to the Military Museum and parked in the shade to eat our lunch. By now the day was very hot and humid, so we went into the museum to enjoy their air conditioning as well as to find out about the World War II activities in the area. The building was very new-looking, and it was full of exhibits. Darwin stepped onto the military stage on January 19, 1942, when the Japanese raided it and dropped a large number of bombs. That was about the same as Pearl Harbor in scale, but not nearly as well-known. 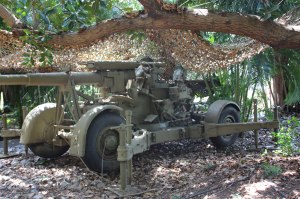 There was a video recalling the event, which ran for about 13 minutes. Besides that there was a lot of memorabilia from the bombing, including a phone directory which had been found in a ditch opposite the post office after a bomb had made a direct hit on it. And there were a lot more displays about the Pacific part of World War II. All in all it was very well done. Outside the building there was a lot more military equipment from the World War II era, much of it in reasonably good condition. There was also a mock-up of the inside of a gun emplacement, which was a bit eerie if you really thought about what happened there. The room where the soldiers stayed was very tiny, enough space to sleep and have a few personal items. Beyond that were other displays about Australian military history, but we started to lose interest and skipped the Vietnam section entirely. 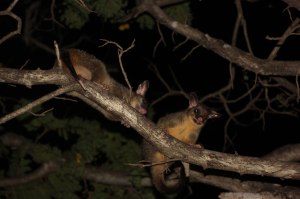 It wasn’t that late, so we decided to see about walking around the downtown area. But the main parking downtown was in a parking building, a no-go for our 2.65 metre-high camper van. So we decided to skip it and head back to the trailer park. Originally we had thought about going out for dinner, but the minor accident had put a damper on our plans. Instead we had a bowl of soup and finished off the crackers. When Paul finally got in touch with the woman whose car we had dinged, as expected she was perfectly happy to get fixed along with all the other dents. Later in the evening we heard scrabbling in our tree again, and sure enough our possums were there. We shone a headlamp at them, which caused them to retreat back up the tree, and we managed to get a couple of photos of them.

This morning was our last morning in the hot, humid, Northern Territory, so we had to repack our packs for flying. (Knives go in checked baggage, batteries go in carry-on…) Even doing that made us dripping with sweat. But it got done, and we cleaned up the camper van and filled it with gas and returned it to Apollo Campers. After it was checked over and given a clean bill of health we headed to the airport.

We had plenty of time before our departure for Adelaide, so we bought a muffin and a drink and sat in the café. Once checked in for the flight we still had almost two hours until departure, but the airport was cool so it was very pleasant. We found that the airport provided free wi-fi, an extreme rarity in Australia, so we spent most of that time catching up on a week or so of e-mails. We were shocked by a series of e-mails telling us that our ferry trip to Maria Island in Tasmania had been cancelled, but eventually we pieced together the story: There are two boats which go to Maria Island, and in November they only go four days a week. And not the same four days, so we booked on the boat which operated on Wednesdays. Well, apparently that boat had a problem and was out of service. So our reservation was cancelled and moved to the other boat, which apparently was now operating on Wednesdays. Another series of e-mails with the reservations agent clarified the whole business.