Farewell to Akaroa this morning, we were moving on again, this time back to Christchurch. After breakfast we checked out of the hostel, which had been very comfortable, and walked down the street to wait for our shuttle bus.

We had half an hour to wait, and there was free wi-fi courtesy of Spark there, so both of us spent the time checking the Internet. Until one of the locals stopped to mail some letters and, noticing us, compared us to a couple of teenagers. He told us that his house in Christchurch had been flattened in the earthquake so he took the insurance payout and moved permanently to his holiday home in Akaroa. His wife would like to move back but at present they have no plans to do that.

The bus arrived at 10:30 am and we and a group of twelve teenaged girls got on. This time the bus didn’t have a luggage trailer for some reason, but everybody put their stuff on empty seats and it worked out fine. Back in Christchurch we were dropped off at the museum, which wasn’t too far from the YHA. It was too early to check in, of course, but we made sure that the room allocated to us wasn’t near the noisy fan which runs all night. Once that was sorted out we left our packs in the luggage storage room and headed out.

We were close to the Botanic Garden, so we went for lunch at the café there. The prices were quite reasonable, the sandwiches were very good, and it was nice to sit outside in the sun. Once done with lunch we went over to the iSite to find out about airport transfers, for our departure the day after tomorrow. We ended up booking a 10 am shuttle, which would pick us up outside the hostel, and we also bought tickets for the Antarctic Centre, where we would spend the day before flying out late in the afternoon.

Punting in the gardens

Now that we had that all booked and paid for we set out on a walking tour around Christchurch. We had a brochure with a walk which mostly followed the tram tracks and its city tour, and a second brochure which showed us what had been there before the earthquake. It was quite unsettling walking around and realizing that the devastation in Christchurch could easily happen in Vancouver.

There were several old buildings which were actively being renovated and others which were just sitting there, sometimes shored up and sometimes not. And there were other streets which were business as usual. We saw the cathedral which had caused so much controversy and also its temporary “cardboard” replacement. The temporary one didn’t look that bad to us, but then we really didn’t know anything about the issues involved. 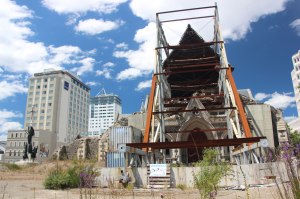 Back at the hostel we got our laundry started before walking over to the New World supermarket to buy food for the next couple of days. By the time we got back the washing was done, so we put the clothes in the dryer and made our dinner.

There was no rush to go anywhere today, so after breakfast we walked over to the Canterbury Museum, which is right next to the Botanic Garden. It’s in a large stone building which apparently survived the earthquakes, or at least wasn’t badly affected.

There was a section which had store-fronts and walk-in areas of businesses which were on the main street in the 19th century, including recordings of people talking about their shops. One unusual section was the Paua Shell House, which was originally in Bluff. It was made famous by the number of paua (abalone) shells which the owners, Fred and Myrtle Flutey, had hung on the walls. People from all over would come to see their house, and they became pop culture celebrities of the 1960’s, so after they died their grandson turned the collection over to the museum. The exhibit includes the front room and hallway of the house, plus the outside of the house, along with furniture and all of the knickknacks that they had.

Back outside we had a snack before walking around the Botanic Gardens. We followed the riverside path around the outside, so we missed most of the gardens, but we did find a tree in a cage. It was a Wollemi pine, an extremely rare tree from Australia. There’s a program to plant Wollemi pines around the world in case the Australian trees get burned in a bush fire or something, and this is one of those trees.

We headed back to the hostel for lunch, which meant basically all of our remaining food. After lunch we went over to check out the Re:Start Mall, whose stores are all made of shipping containers. We didn’t find anything to buy, though. So now we felt ready for another go at the museum. The second floor had an exhibit on Canterbury (the state where Christchurch is located) today, but it had way too many words. There was also a Bird Hall which covered New Zealand birds pretty well, but their bird specimens were old and faded.

The best part was the Antarctic exhibit, which was mostly about the British Antarctic expedition of 1957-58, in which Sir Ed played a part. There was a movie which must have been made soon afterwards, including film of the actual expedition, and some of the original vehicles which drove across Antarctica.

We’d agreed to go meet Karyn and James, two of the New Zealanders from our Banks Peninsula walk, so we went back to the hostel to wait for them. They were going to take us on a tour of Christchurch including an area where there were supposed to be Bar-tailed Godwits. Karyn showed up on her bike and James arrived shortly in the Range Rover.

We drove through large areas of Christchurch which had been populated with houses before the earthquakes. These areas used to be swamps before they were filled in and built on, so now they are condemned. The debris has been removed and the areas have been grassed over and nobody is allowed to rebuild there. The council keeps the area neat by mowing the grass, but sometimes people who only have cars to live in come here and “freedom camp”, which causes problems.

The area where we were driving had several road closures and detours as a result of the earthquakes, or of road repairs, but eventually we got to where the birds were. It was high tide so it took a while before we found a mudflat. But finally we did, and after a while James and Paul located the godwits, which were mixed in with numerous Pied Oystercatchers.

On the way back we stopped for dinner at a pub called Pomeroy’s. Rosemary had the chicken and bacon pie which she had missed out on at the garden café and Paul had a pulled pork sandwich. The food was good and like most pub meals had large portions, although not as large as what you would get in an American restaurant. After saying goodbye we got back to our room and got ready for tomorrow’s flight home.

At last we’re going home today. It seems like it’s about time, even if we are returning to several days of rain storms! It didn’t take us long to pack our packs today, after having done it so many times on this trip, so there wasn’t much to do this morning. We had breakfast and then chatted for a short time with a fellow traveller.

Steve’s Shuttle picked us up at 10 am to take us to the airport, and once we were we checked in for our flight and gave them our large packs. This didn’t take very long, so now we only had five and a half hours until our flight to Auckland would leave. 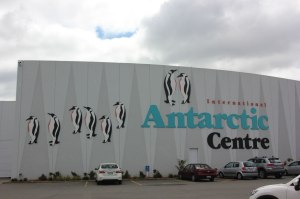 Christchurch is one of the main gateways to Antarctica, so just down the road is the Antarctic Centre, an entertainment and interpretive site. We had already purchased our discounted senior tickets from the iSite in Christchurch, so we went over there right away. We had missed the 10:30 am penguin feeding but they scheduled us in for all the other events. At 11 am we went to the 4-D movie about a trip to Antarctica, which was great fun. It started off with crossing the Drake Passage, complete with bouncing seats and sea spray in our faces, then toured us around the continent. We had birds flying towards us, penguins walking towards us, and (real) snow falling on us. Definitely an entertaining film.

Then there was the Antarctic Storm, where we got to stand in a cold room in the snow and experience wind chill as the temperature dropped to -25°C. The storm didn’t last long but it was interesting to be in that dry cold air. From here we went on to a Hagglund ride. (A “Hagglund” is a ruggedized tracked vehicle designed by the Swedish army and used to get around Antarctica.) We went behind the Antarctic Centre, so we went over hard-packed dirt rather than snow, but we were able to experience how the machine handled in various conditions. We went up 45-degree hills and over a crevasse and through deep water, which was a lot of fun.

Penguin at the entrance

After lunch in their café—New Zealand meat pies—we went back in for the interpretive part. They had a pool with Little Penguins which had all been rescued after various mishaps. We were missing feeding time but we watched them puttering around. Besides the penguins there was a variety of other displays, which showed the various expeditions to Antarctica including actual artifacts from those expeditions. The whole thing was really good and we thought that more cities should have attractions like this near their airports.

Finally we returned to the airport. Going through security was easy and fast, so we arrived at our gate with lots of time. The flight to Auckland was scheduled to take an hour and twenty minutes, and then our flight to Vancouver would leave at 8 pm and take 13 hours, arriving at noon but still on December 9.