We were up early to catch the bus at 7:05 am, this time to Te Anau. By the time the bus arrived there were a lot of people waiting, but most of them were going on to Milford Sound to go on a boat trip. Our bus journey was made more interesting by the bus driver’s commentary; as we travelled along he pointed out various historical points of interest. We passed through Garton, which according to the driver was the exact centre of the South Island, being the farthest place from all of the shores.

We reached Te Anau at about 9:30 am and, claiming our packs, walked the short distance to the hostel. It was far too early to check in so we stashed our packs in the luggage room and went out to explore. We checked in with Real Journeys for tomorrow’s trip to Doubtful Sound, and then walked along the lakeshore to the DOC office to get our hut tickets for the Kepler Track. Walking back we saw a family of Shelducks with their nine babies swimming along. We watched them for a while and then continued into town, where we bought freeze-dried food for our Kepler trip and then ended up at the pie shop for lunch. While sitting outside and fending off the gulls we met the two Aussies who had been on the Routeburn with us, so we chatted for a while.

Shelducks with their brood

After lunch we went back to the hostel to do our laundry, which took about an hour. While that was happening we repacked our bags for tomorrow’s overnight cruise on Doubtful Sound, for which we only need a small bag. So finally we were organized and it was time for a walk. Phew!

We’d already walked one way along the lake, down to the DOC office, so this time we walked the other way along the lake instead. The day was warm but windy, and the views along Lake Te Anau were fantastic. We walked past grasslands with sheep, and there were a lot of skylarks singing. However the grasslands are all for sale, being subdivided into large lots for holiday homes. Finally we came to a path leading away from the shoreline so we followed a series of quiet roads and pathways back to the hostel.

Sheep in the fields

The hostel has a good-sized kitchen with nice pots and pans, so it wasn’t too crowded as we made our dinner. Bedtime was earlier than last night, even though we didn’t have to get up earlier tomorrow.

Today we were off to Doubtful Sound for our overnight cruise, but since our bus didn’t depart until 11:30 am we could sleep in. So after everybody else in our block had slammed their door at least three times each, starting at 6 am, we went back to sleep. 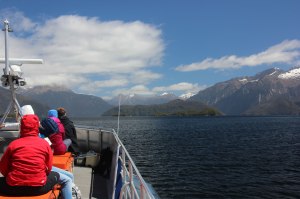 Our bus started at the Real Journeys office and took us all around Te Anau, picking up people from their hotels, before heading 20 kilometers down the road to Manapouri. From there we travelled across Lake Manapouri by catamaran. At the far end was the power station, which produces about 500 megawatts of power for the aluminum smelter at Bluff. The lake’s water levels are carefully regulated to be environmentally sensitive. Here we got onto another bus, which would take us across Wilmot Pass to Deep Cove at the head of Doubtful Sound. The weather was spectacular for the trip, so the views were great, and the driver stopped a few times for us to take photos.

After all this travelling it was just about 3 pm, but finally our boat awaited us! Once on the Fiordland Navigator we were shown to our room. We were booked into a four-bunk cabin on the lower deck, so we just put our overnight bags on the shelf there and headed back up to where the action was. They served afternoon tea and pretty soon our boat headed out, with 70 passengers on board. 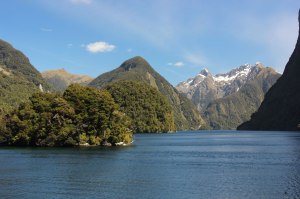 As we went along the sound, Sim the naturalist gave us a commentary about the area. It wasn’t long before we came to a group of bottlenose dolphins, so our skipper cut the engines and we all admired them as they passed by. They wouldn’t be the last dolphins we would see. The water was very calm and there was very little wind, so sitting outside was very pleasant. The scenery was beautiful, high cliff-like walls with a variety of vegetation or sometimes just bare rock.

Soon we diverted into Crooked Arm for some water activities. We had the choice of kayaking or going in a tender-boat with a naturalist. We opted for the tender-boat ride, donning our life jackets and going down to the lower deck to get aboard. By the time the activities were done it was late afternoon, so we were offered hot soup (pumpkin or tomato) and buns. Dinner would not be until late so that would tide us over until then. 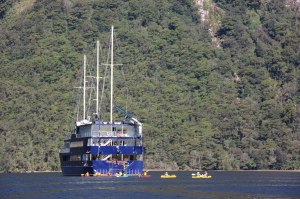 By 7 pm we had not only explored side channels, we had also reached the far end of the sound and motored out into the Tasman Sea, where the skipper partially raised the sails. This was strictly for show as the motors were always used. We looped back around a group of small islands to view the New Zealand fur seals, and luckily we saw two Fiordland Penguins, which are one of the world’s rarest penguins and certainly the hardest to find in mainland New Zealand. On the way back we also saw some Little Blue Penguins, so the day was very successful bird-wise. 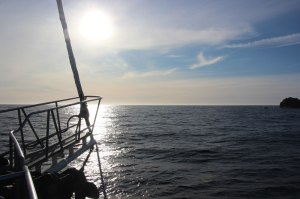 Out into the Tasman Sea

Dinner was served very soon after that, about 8 pm. On offer was a buffet with salads, roasted veggies, mussels, smoked salmon, roast beef, and best of all roast lamb. Dessert, also buffet-style, was chocolate mousse, blueberry cheesecake, chocolate cake, pavlova, plus a cheese platter. Everything was excellent. So it was 10 pm by the time Sim the naturalist gave his presentation about Fiordland and its environment and history, starting with Captain Cook. And it was 11 pm when we retired to our bunks. Our room-mates, who we had barely met, were already asleep.

The boat had moored way up in Precipice Cove at the end of Bradshaw Sound, because that was a place protected from last night’s winds. And at 6:15 am the engines rumbled into action, so we got up. During breakfast we motored down Bradshaw Sound and back into Doubtful Sound. 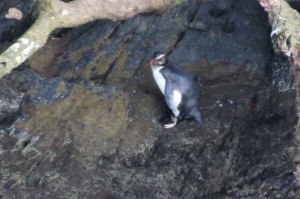 Again we met the dolphins and had to pause while they went by. Before returning to Deep Cove we made a side trip into Hall Arm, where the skipper stopped the engines and all of the generators. We all sat in silence for several minutes, enjoying the silence of the fjord. It was lovely standing and listening to the birds while enjoying the reflections in the calm water, and this had been a wonderful trip. 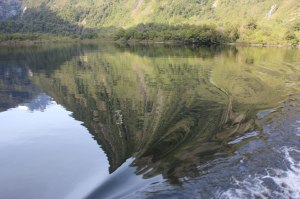 Once back at the dock we reversed yesterday’s route—bus over Wilmot Pass, catamaran over Lake Manapouri, bus back to Te Anau—finally arriving about 12:30 pm. We checked back into the hostel, collected our stuff from the storage locker, and had lunch. After that we spent the afternoon shopping for food and souvenirs, and having showers. Dinner was hot chicken again, so we could take the leftovers on our Kepler Track walk. Which would start tomorrow, so we had to reorganize our packs yet again. 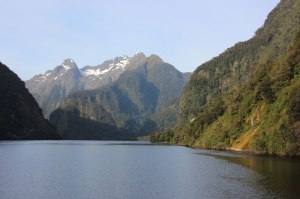