Our albatross trip in Kaikoura had been cancelled due to weather, so now we had an early start on our drive to the West Coast. It was still cloudy but not raining, and the first part of the route was very hilly and twisty. But once we got to Highway 7 the road straightened out. There was very little traffic, too. 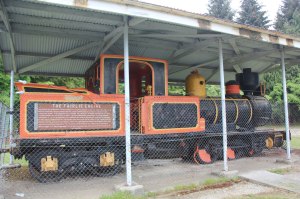 By lunch we were at a town called Reefton, and we stopped to look around and stretch our legs. The area was a mining community dating back to the gold rush of the 1860’s. We parked outside the iSite and the lady there sent us up to talk to the bearded miners who have a historic shack just up the road. The two bearded miners there told us stories about the mines, and also told us that the local gold mine was shutting down because the price of gold wasn’t high enough. Since it was lunch time, we stopped at the pie shop and each had a steak and mushroom pie. They were good pies and they were a good way to break up our long drive. 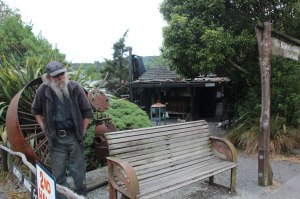 On the road again, we drove northwest to join Highway 6, which would take us through to the Tasman Sea coast. We went through the Buller Gorge before reaching the coast near Westport; it was quite scenic, with a couple of places where there was only room for one lane of traffic. In those places there were traffic lights controlling whose turn it was. 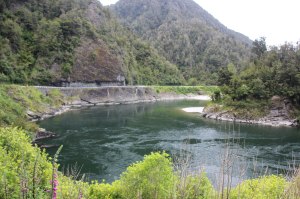 From there we drove out to Cape Foulwind and Tauranga Bay to see the fur seal colony. It wasn’t very large but it did have several quite small pups. Finally we reached Punakaiki; our hostel was three kilometers north of the town but luckily we saw its sign posted on the highway. We drove down a narrow road and found the place. Our room was in a small house with the bedrooms upstairs in a loft-type setting. Once we had settled in we had some tea before setting out yet again, this time on foot. 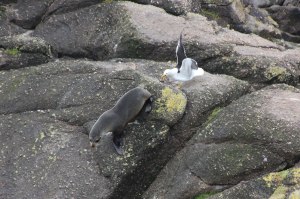 The Pancake Rocks were farther along the highway, past the town of Punakaiki. To get there we had to walk along the highway, but luckily there wasn’t too much traffic. We arrived at the rocks about 4:30 pm, so rather than looking at the visitor centre we headed straight over to the rocks. They are quite amazing and they are well-named, as they do look like stacks of pancakes. They are some kind of sand which formed in layers before becoming rock, and they are now eroded into interesting shapes. Besides the geologic formations, there were numerous White-fronted Terns nesting on the stacks. 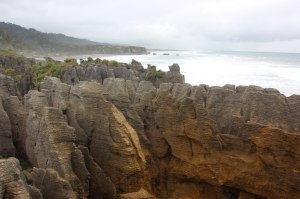 By the time we were finished there both the visitor centre and gift shop were closed. The walk back to the hostel went quickly and we made a side trip down the Truman Trail to the beach to check that out. From there we found the side trail which led us back to the hostel via a back door route. 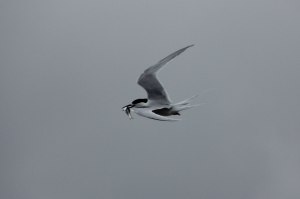 After our usual breakfast we packed up and headed up the gravel from the Punakaiki hostel to the highway. The road south was a combination of windy sections through forests and open stretches along the ocean. The weather was beautiful and we had great views of the Southern Alps. As we approached Whataroa we could see Mount Cook far in the distance. 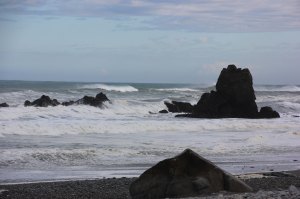 We had come to Whataroa for a tour of New Zealand’s only white heron colony. We arrived in the town a bit before noon so we had plenty of time to look around, not that there was much to see! We went into the (one and only) café for lunch; the sandwiches didn’t look that great and it was hard to find any without cheese, but they were not that bad in the end. 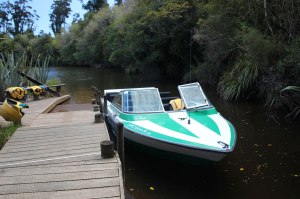 At 1 pm our tour started from the office just across the road. Including us there were 11 people, and we started with a van ride down some country roads to a dock on the river, where we all got into a boat. We put on life jackets and waited until our guide Aaron launched the boat. Neither of us had realized that the 20-minute ride would be on a jet boat, which is by far the best way to travel along shallow rivers. It was great fun zooming along the river, making sharp turns around corners and accelerating out of them. 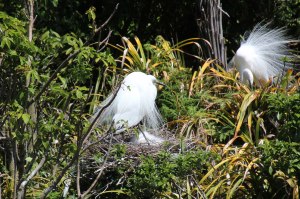 This is the only nesting area in all of New Zealand, so the site is well protected. We walked along a boardwalk through old-growth kahikatea forest until we came to a bird hide, and on the way Aaron pointed out a beautiful orchid which had just opened up. Just across the small channel were the nesting herons, still bearing their fine filmy back plumes from the mating season. We could see small chicks in some of the nests, and from time to time we saw one partner arrive with food and the other partner fly off. Besides the white herons there were also Royal Spoonbills and shags nesting. We spent about half an hour at the hide and then walked back to the boat for the return journey. It was a lovely way to break the day. 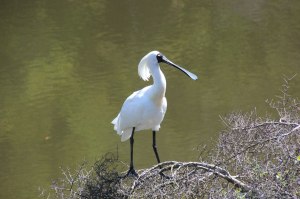 Back in Whataroa we hopped into the car and headed just a bit farther, to Okarito, our destination for the day. Okarito is even smaller than Whataroa; it has no shops and only about a dozen houses on the main street. Our room for the night was in a very nice shared house called the Summit House. Initially we had the place to ourselves, but then we were joined by a couple from Colorado. 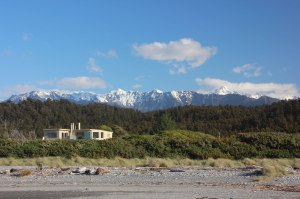 After dinner we went down to the beach to look around and to enjoy the views. From here we could see Mount Tasman and Mount Cook. There was still time before our evening kiwi tour so we walked over to the Okarito Lagoon to see what was there. Paul spied a (South Island) Pied Oystercatcher, so now he has seen all of the world’s oystercatchers except for one. 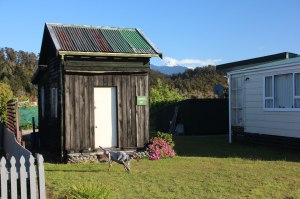 We stopped off at our room to get warm clothing before heading down the street to meet our guide Ian and the other tour participants. Once everybody was assembled we were given instructions on what the evening would be like. This was not just “Okay guys, let’s go scare up some kiwis”. It was more like a military operation. First he started with the motivational speech about the necessity of patience above all, and next he trained us on how to stand in a perfect straight line—so that nobody would block anybody else’s view—and how to walk together and even how to cross the gravelly bit at the edge of the road. We had been brought up in a marching band so we had no trouble with this, but some of the others were quite sloppy!

We went in a van a short distance from Okarito, back up the main road. The key to Ian’s ability to find kiwis is that the conservation officers know all of the local kiwis (who all have names) and where their territories are. And also, they all have radio transmitters on their legs. Our targets tonight were a pair called BZ and Beaumont whose territory overlapped the road. Ian located them using his antenna, so we knew we were there, but they stayed in the bush. We got colder and colder as we stood there, until finally we heard BZ (the male) calling. Right away Beaumont (the female) replied, right in front of us!

There was a bit more shuffling in the bush and then we could hear the two kiwis snuffling and sniffing in the bush in front of us. Hearing a bird breathe isn’t something you do very often, and Ian said later that it’s very unusual to observe that behaviour. The pair snuffled to each other for quite some time, and eventually they separated. Ian used the antenna to follow BZ up and down the road, and it was nearly 11 pm when we finally saw him. At first he poked his head out of the bush, and about five minutes later he reappeared and walked along for a short distance before quickly crossing the road. All of us got to see him quite well.

We returned to the hostel to find two more of our fellow guests had arrived, so we sat by the fire with one of them before we went to bed. It took a while to get warm again but the bed was very cozy and sleep came quickly.

After having lovely showers we had breakfast, and then packed up to leave. We had a long drive to Queenstown and had hoped to get away early, but we ended up not leaving until 9 am. Once again we followed Highway 6 as it wound its way through forests, along the seacoast, and through pastures with cows and sheep. At Franz Josef we drove up the road which said “Glacier View” and then took a 20-minute walk up a little hill to a viewpoint. You could see the glacier, but it was really just a shrunken relic of what it used to be. 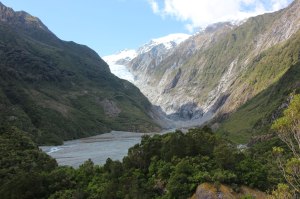 Farther down the road was a viewpoint over the ocean and a monument in honour of a large chunk of New Zealand’s being made into a World Heritage site. Then we continued up to Haast Pass on a road which had a very large number of one-lane bridges. The pass was surprisingly low considering the height of the mountains around it, and it led in a dry rain-shadow area of lakes and tussock grass. 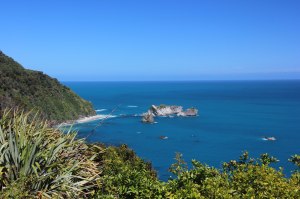 We reached Wanaka at about 2:30 pm, and Rosemary had found what looked like the short way to Queenstown on the map. This was the Crown Range road and it cut 40 kilometers off our journey, not to mention we didn’t have to follow slow-moving camper vans. From the pass we switch-backed down a very tight series of turns into the valley and then followed the road to Queenstown. 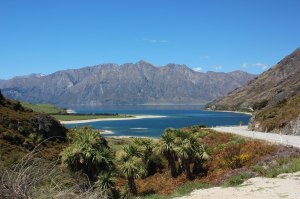 We filled the car with petrol and returned it to Hertz before checking into the YHA. We had an ensuite room with a kettle and tea and coffee, and a great view overlooking the steamboat dock and part of the lake. But we still had more work to do: we went out to the DOC office to get our permits for the Routeburn Track, then to the Doubtful Sound office to check in for our trip several days from now, then to MacPac to buy freeze-dried dinners for the Routeburn. After all that we decided to buy a pizza for dinner rather than cooking, so we stopped off at Domino’s where we ordered a Classic Americano for only $7. 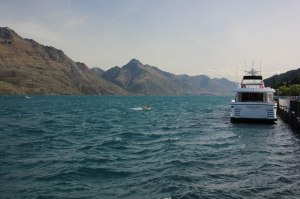 Back at the hostel we repacked our bags again. This time we loaded up our packs with gear we needed to walk the Routeburn Track, and everything else went into duffle bags. This hostel had luggage lockers which only cost $2 for as long as you wanted to use them, so we put the duffle bags into one of them. Bedtime was at 11 pm.