The Parrot Licks and the Second Tower

For some reason we thought the wake-up knock would be at 4:30 am, so when we woke up at 4:55 we jumped up and started to get dressed. But then the knock came promptly at 5 am so we weren’t late after all. We had the usual breakfast, then reconvened at the dock to start our day. Today we were visiting Yasuní National Park to see the parrot licks there. Luckily everyone in our group also wanted to visit the community village there, so our morning would be busy.

To get to the park we canoed across the lake, then walked along the boardwalk to the Sacha Lodge boat landing, then travelled downstream by motorized canoe for about 20 minutes. There were two other boats already at the clay lick, which was visible from the river. The scene we watched was fascinating, as four different parrot species were at the lick eating the clay to aid in their digestion. (Their diet includes fruits whose seeds are somewhat toxic, so the clay neutralizes those toxins.) There were crowds of parrots eating the clay, and more crowds in the bushes and trees nearby, all squawking noisily. We watched for quite a while before heading to the dock to visit the village.

The village was the Kichwa community of Añangu, which means “ant” in the Kichwa language. We first went to the meeting house, where one of the women greeted us. She told us that the nearby parrot lick had parrots and suggested we go there next. Once again we watched the parrots eating the clay, but this time from the blind rather than from a boat bobbing on the river. 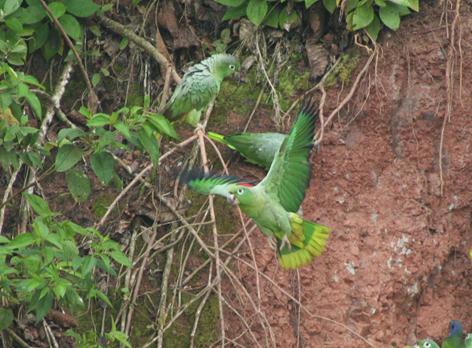 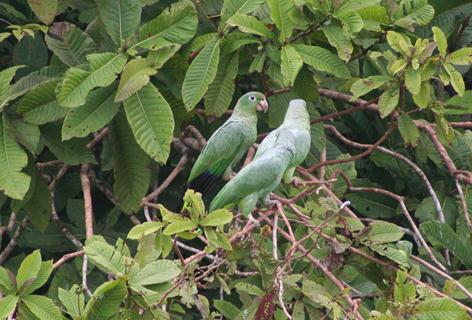 Back in the village, there was supposed to be a traditional dance, but unfortunately there was a flu epidemic in the village and many of the women had taken their children to Coca for treatment. Also the local shaman was supposed to perform a healing ceremony, but he had the flu as well so he too had gone to Coca. So first we headed to a covered area with displays of the various traps that the inhabitants of the village used for catching anything from small rodents and birds to much larger animals such as jaguars. These were very similar to the traps which were used by the indigenous people of North America, and the jaguar trap was functionally identical to the traps used by Parks Canada to catch problem bears. 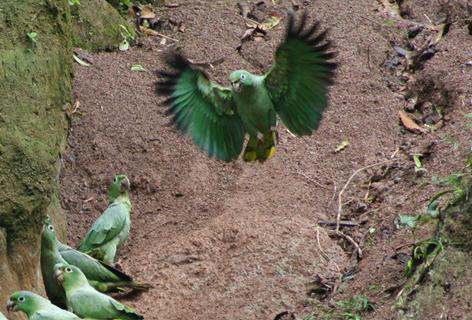 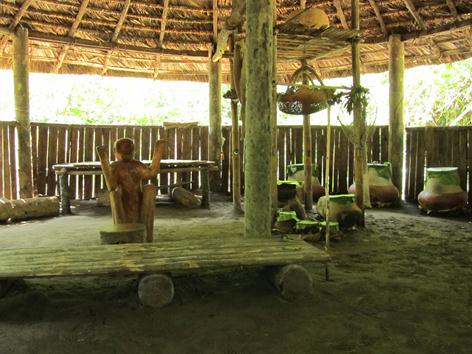 After that we went to another area to see how the inhabitants prepare their meals. We also got to taste chicha, a kind of beer made from yuca and sweet potato. It had an interesting flavour and rather tasted like corn. We also tried tea brewed from a local plant. The people also weave their own baskets out of lianas and make their own pots from clay.

After that we stopped by the gift shop, where we bought a necklace made of anamora seeds and a wooden statue of a bird (a White-necked Toucan to be specific). From here we went back to the boat and headed a bit farther upstream to another parrot lick. To get to this one we walked along a concrete pathway for about 10 minutes before entering a blind. This blind was built near the bottom of a cliff where the clay attracted different parrots than at the other licks. There were about a thousand Cobalt-winged Parakeets circling and perching in the trees and making an awful racket. They started at the top of the canopy and slowly made their way down. But if there was any unexpected noise, or a hawk flew by, they took off to the top of the canopy and started all over again. This happened two or three times before it was time for us to go. But before leaving we were lucky enough to see a Red-and-green Macaw through a spotting scope. 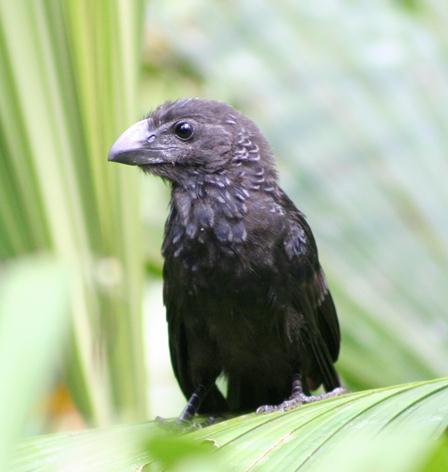 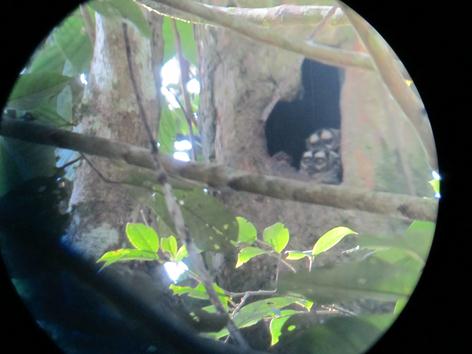 Our trip back to the lodge went quickly, and we made it back just at the end of lunch. After lunch we had a rest and showers, and then were off to our afternoon activity. We met at the Choza to start the walk to the new canopy tower, which was built in about 2003. There are three metal towers, about 35 metres high, connected by a suspension bridge, and the whole construction cost about two million dollars to build. We climbed slowly to the top of the first tower – if you get sweaty then the sweat bees will seek you out and harass you. Sweat bees are only about four millimetres long, and they don’t sting. They just like to drink sweat, so that means that they crawl over your face and into your eyes. But fortunately they were not much of a problem today. 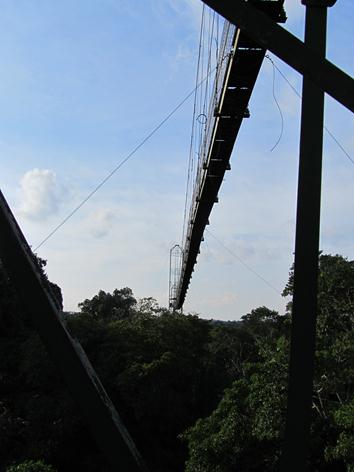 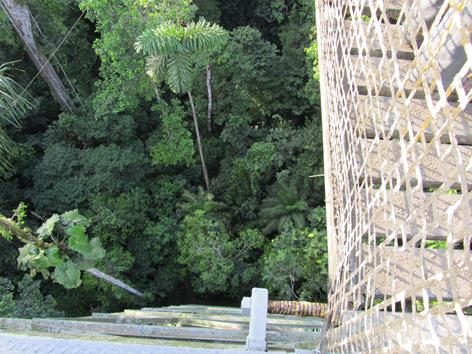 Once at the top of the first tower the views were good, but more importantly we were looking down at the tree tops. We saw several new species of birds and Rosemary tried photographing some of them through Tino’s spotting scope. This worked out surprisingly well. To get to the next towers we walked over two sections of suspension bridge which were about 150 metres long. Tino located a sloth in the top of a tree far away, but even using the scope at maximum magnification it was difficult to make out the animal. 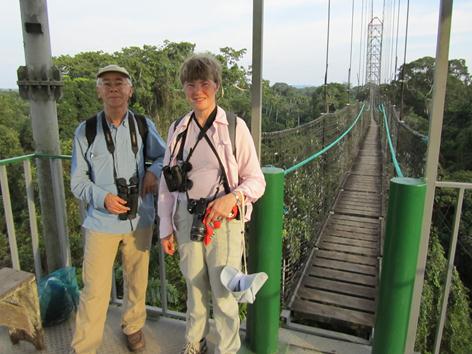 Before we knew it, it was time to go down. We climbed down the 180 steps and then walked quickly back through the forest, arriving at the lodge just as it was getting dark. Dinner was at 7:30 as usual, but today it was a barbeque and farewell dinner out on the boat dock. Today Pablo was also with us for the meal, so we found out a bit more about him and his family. We sat around a bit afterwards, then went and paid our “bar” bill before going back to our room. We looked at all the photos taken today – over 200 photos of parrots! – then packed up most of our stuff in preparation for our departure tomorrow.