We woke up at 8 am to find that it was very overcast and threatening to rain. We packed up our gear then went to breakfast. Our bus to Reykjavík wasn’t scheduled to leave until 3 pm, so we decided to go out for a walk.

Neil and Christine were off first, planning to hike the ridge west of the hut which the two of us had done on the first day. But by the time we were ready to go, it was raining quite steadily. We started out towards Bláhnúkur, which we had not yet climbed, but we didn’t get far before the clouds really opened up. So we both decided to abort the walk – what was the point of climbing a steep and possibly slippery trail, in the rain, to see no view? So we went back to the hut. After all, we had been told that if you didn’t like the weather in Iceland you should just wait half an hour and it would change!

We spent the morning in the hut doing sudoku puzzles and waiting for the rain to stop, or at least slacken off a bit, but it never did. Finally noon arrived and so did Neil and Christine, dripping wet. They had applied the “just wait half an hour” theory several times, they said, and so had walked the whole ridge in the rain and mist.

We made lunch, using up the rest of our lunch food. The kitchen was actually the warmest area of the hut, so we stayed in there as long as we could.

Around 2 pm we decided that since we were just sitting around, we might as well sit on the bus. The last thing we wanted was to have to wait while BSÍ sent out another bus to pick us up. So we went over and boarded the bus, which was already half full with people who had made the same decision as us.

The bus pulled out on time at 3 pm, and as it did, the sun broke through the clouds. (So there, if you wait half an hour often enough, the weather will indeed change!) The bus ride went by fairly quickly because this driver did not take the photo breaks that our incoming driver had taken. 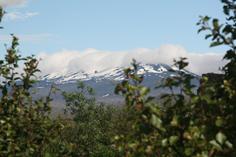 It was lucky, though, that one of the scheduled stops was at a campsite which had a good view of Hekla. Clouds were still covering the top, but you could still see how big it was.

Back at the BSÍ terminal we collected our packs and walked back to the hostel. The weather in Reykjavík was sunny and fairly warm. This time we had a different room in the hostel, one which did not have the harbour view. First order of business was showers, which we both enjoyed, then we discussed where to go to dinner. Fish and chips again? Hot dogs? Pizza? It was finally decided to go to Café Paris, which we had seen recommendations for, and a very good choice it was. Both of us had the trout with rice and roasted vegetables – probably the “trout” was what we would call “arctic char” – and Neil and Christine both had lamb. All of us enjoyed our meals thoroughly.

After we had finished we went for a brief walk before returning to the hostel to pack up in preparation for tomorrow’s trip home.