We were up early today to be down at the 360 Discovery dock at 8:30 am, for our ferry’s scheduled 9 am departure. We were taking only things required for our overnight trip to Tiritiri Matangi, so we had our day packs and a well-stuffed duffle bag which was a bit awkward. Luckily the weather was fine, so sitting at the dock was not a problem. We sat beside another passenger, an Australian named Rob who was travelling around New Zealand on his own. He was only going over for the day, so he had planned out his walking route in advance.

The ferry took about 75 minutes to get to the island, which included a brief stop at Gulf Harbour. Once on the island the ranger, David, was there to give everybody a brief talk about the island. After that he arranged for us to meet him for orientation at the bunkhouse in an hour. The duffle bag went with David in the trailer and we set off up the Wattle Track with Rob.

This trail climbed gently up the hill, through recently regrown native forest. We saw numerous birds, all of them native species. We stopped by the Stitchbird feeder, which was very active with both Stitchbirds and Bellbirds, and we saw our first Takahe there. It did take us an hour to walk the trail, what with all the birds, and when we reached the bunkhouse David was waiting for us. He showed us where everything was and outlined the rules, and we moved our gear into one of the rooms. 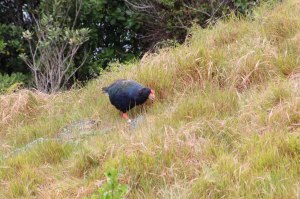 By now it was noon and starting to drizzle, so we decided to stay at the bunkhouse to eat our lunch while Rob went on his way to walk the East Coast Track. The rain continued for the next couple of hours so we sat in the bunkhouse and read. Finally it let up, so we donned our rain gear and headed out along the East Coast Track. Typically for coastal tracks, it went up and down, through forests and along grassy hillsides. We could hear a lot of birds singing, including a lot of Saddlebacks. At the north end of the island we came to a small wetland with an information sign which said that Brown Teal and Spotless Crake could be found in the area. And sure enough there they were, one in each pond! 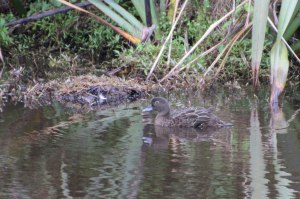 Back at the bunkhouse we made our dinner and then talked to our roommates, an Austrian couple who were on a long trip in the southern hemisphere. Both of them had very expensive camera gear and the photos they showed us of humpback whales in Tonga were very impressive.

When it got dark, we covered our flashlight with red cellophane and went out with three other people to look for kiwis. They had found one the previous night so we hoped we might be just as lucky tonight. But the rain was coming down steadily so listening for birds was heard. We heard a kiwi calling, but it was quite a distance away, and then we heard a Morepork (the New Zealand owl). It was very close and we actually saw it, but there was too much rain so we gave up on seeing kiwis.

It was rainy last night, but at 6 am there was a dawn chorus, all of the birds singing at once. But we didn’t get up until 8 am, at which time we had breakfast and packed up our gear. Checkout time was 10:30 am, so we put our bags outside and went for a walk.

We headed down to the wharf, to join up with the Hobbs Beach trail. We had been told that there was a Little Penguin nest box which had a Little Penguin with chicks in it. The nest boxes there had lids, so you could look in and see the occupants; we looked carefully in all of them but couldn’t see any penguins. One of them was very fishy-smelling, but we still couldn’t see anybody at home there. Continuing along the trail we came to Hobbs Beach, where we could see a Variable Oystercatcher sitting on its nest. The nest was very close to the high-tide line, but hopefully the chicks would survive. There was also a pair of dotterels which looked like they might have a nest, even doing the broken-wing act when we approached, but we couldn’t actually see it.

From here we walked around several other trails, ending up back at the bunkhouse for lunch. There were a lot of researchers and volunteers there, so it was hard to find space at the table. We went over to the gift shop to buy some souvenirs, and then headed off to catch the ferry back to Auckland. One of the volunteers was going down the Wattle Track, looking for kokako, so we went along with her. We hadn’t see any of this iconic species yet, and we didn’t see any today either. We checked out the penguin nests again, but we still didn’t see any inhabitants.

The ferry ride went quickly and we were treated to a beautiful rainbow just before reaching Auckland. We hauled the duffle bag up Queen Street without dropping it, and once we unloaded it at the hostel we headed right back down Queen Street to restock on grocery supplies.