This morning the beds were very cozy with the warm duvets and the room was chilly, so we didn’t get up too early. After breakfast we organized lunches and day packs and headed out to look around the Isle of Harris. (The Isle of Lewis and Isle of Harris are actually both part of a single island—it can be confusing until you realize they aren’t islands themselves.)

The sky was definitely more overcast than the previous days and we felt a few raindrops as we went out the front door. First we headed down through Tarbert towards the island of Scalpay; the bridge to the island looked quite new and was reminiscent of the Norwegian bridges which connect their islands to the mainland. The roads were very narrow, with passing places sprinkled frequently along the way, and not only were they narrow, they also went up and down and around corners so Neil was forced to drive quite slowly.

The island had a surprisingly large population and there was a fish packing plant there, not surprisingly since the local waters are full of fish farms. It was Sunday today and so there was nobody about except for a few severe-looking women on their way to the Free Church of Scotland for the noon service. But having toured all the roads of Scalpay we carried on to our next stop.

Along the way Christine pointed out the route of the Postman’s Walk, which we were planning on doing tomorrow; we passed through Tarbert and turned west onto the B887. In the valley of Glen Meavaig there was an old unpaved road leading northwards, and we parked the car and walked up that road to a small building about 2.5 kilometers along the road. This was the North Harris Eagle Observatory and there were several people already sitting in the hut looking for eagles. It didn’t take long before a tiny speck was seen flying above one of the adjacent hills. It was in fact a Golden Eagle and we soon had more sightings of eagles, including one carrying prey. So much for those people on the web forums who said they didn’t see any eagles! 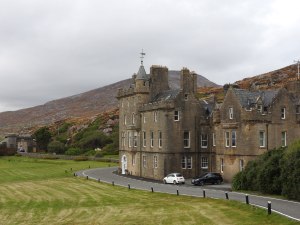 Back at the car park we had our lunch, using a stone wall in place of a picnic table, before heading farther west. There was an actual castle on the road, Amhuinnsuidhe Castle, which apparently is available for weddings and other events. They had a very small shop with an honesty box, and Christine bought some minced venison for a future dinner. Beyond that, at the end of the road, was the small settlement of Huisinish. From there we did a short walk over the narrow isthmus to see the island of Scarp.

We arrived back at the cottage in Tarbert at about 5 pm and had some tea to warm ourselves up. Dinner tonight was chicken soup which Christine had made from yesterday’s leftover chicken, the perfect meal to finish off our day outside.

Today it was a bit cloudy in the morning, but nevertheless after breakfast Christine drove us over to Rhenigidale so that we could walk part of the Postman’s Walk. Rhenigidale is a very small village near Tarbert—we counted only six or seven houses there. It only got road access in 1989, making it the last place in the UK to be connected by road. There was a youth hostel there so we went over to have a look at it. Much to our surprise we met a fellow Canadian there. When we asked where he was from he said “Vancouver”! We chatted for a short while and then started out on the walk. 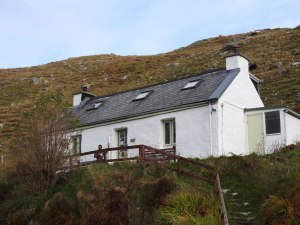 Right away we passed by a group of five or six deserted houses, which were now only stone foundations in a more or less ruined state. The trail went along the sea shore and angled down to sea level, where crossed a bridge over a creek. Before starting up the very steep slope opposite we paused to enjoy a cup of tea. The weather was now perfect for walking, with blue sky, sunshine, and a slight breeze.

Climbing up the trail from the bay we found ourselves going through a gate in an electric fence. Its purpose, the sign said, was as an experiment to try to keep red deer out of the peninsula so that its natural plants could be rejuvenated. We didn’t see any deer, but the vegetation was quite different on the two sides of the fence so maybe it was working. From there the trail switchbacked up and we gained height rapidly. At the top the trail crossed a wide saddle, and we ate our lunch while enjoying the views over to the mainland and south to the mountains of Skye.

From there it was a straightforward trot down the hill to the road to Tarbert. Walking along the road was tedious but soon we entered the town. Neil and Paul had coffee at a café while Rosemary went into the nearby Harris Tweed shop. She didn’t find anything that she wanted to buy there (Harris Tweed is very expensive) but in the fabric shop across the car park she bought a meter of a beautiful blue fabric to make a skirt. 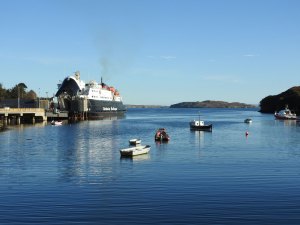 Back in downtown Tarbert we stopped off at the Harris Hotel to inquire about the possibility of having dinner there tomorrow night. No problem, they would be open.

Today was just as sunny as yesterday—our luck with Scottish weather was still holding. Once again Christine dropped us off at a trail-head, this time to walk part of the Coffin Road, which was a track used by the people of South Harris to carry their dead to a place where the soil was suitable for burials. Most of the area has shallow soil over rock, and there are only a few places called “machair” which have deep and sandy soil. 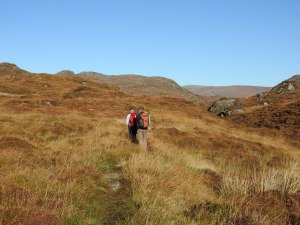 Starting out on the Coffin Road

The route was very easy to follow with very little elevation. It was well-maintained, too; we came across the trail-maintenance machine but it wasn’t usable any more. Before long we came to the high point, where we sat and drank some tea while enjoying the sunshine. This place is called the “Pass of the Birds” and as we sat there a large bird flew over—it was a Golden Eagle, being chased by a Merlin! And as the eagle shook the merlin off and circled about, a second Golden Eagle came along and chased the first one away. This was a much better sighting than the distant eagles we’d seen the other day at the Eagle Observatory. And we had also flushed a Red Grouse earlier, so it was a good bird day. 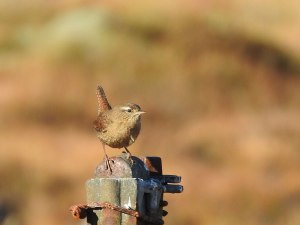 Eurasian Wren by the route

Continuing down the trail we joined a road which led us to the main road near Seilebost. We had said we would wait for Christine at the bus stop (whose name was “Luskentyre Turn”) so we sat in the shelter there and ate our lunch while we waited.

In the afternoon we did a driving tour through South Harris, passing the Harris Golf Club and then through Leverburgh. We considered having coffee there but couldn’t find any open cafés so we carried on along the coast, stopping at the Church of St. Clement. It was a surprisingly large church for the area and it had been there for hundreds of years before falling into disuse. Finally we found the Bays Café in a community hall at Leac-a-li, very close to this morning’s trail-head, so finally we had our tea and coffee and scones while the waitress sat at the next table chatting in Gaelic to the locals.

Back at the cottage we had a quiet afternoon before toddling over to the Harris Hotel for dinner. They had very good food, including sticky toffee pudding, and we were all very satisfied by the time we were finished.

Next: Berneray and North Uist