Today was to be our first full day at Mývatn, and our plan was to go on a whale-watching trip leaving from Húsavík. Breakfast was included in our room rate at the Eldá guesthouse, so we went over to the breakfast room in the next building at about 8 am. The buffet laid out there was very complete, with everything from wild duck eggs and smoked arctic char right down to cornflakes and milk. There was also a strange kind of bread which turned out to be the local “geyser bread”, which is cooked in hot springs. Rosemary opted for her usual breakfast – muesli and milk followed by fruit and tea. Paul as usual tried all the stuff he couldn’t get at home, namely the smoked fish and duck eggs.

After breakfast we organized our packs for the day’s outing. The first order of business was the drive to Húsavík, so we got into the car and headed up Highway 87. It was about an hour away, and when we got there we went to the docks to book our tickets. We had two whale-watching companies to choose from, and their programs looked basically identical, so we chose the one which was €1 cheaper.

Our departure was not until noon, so we went into the nearby Whale Museum. The displays were well done and very extensive, giving information on the different species as well as on the history of whaling. Then at 11:50 am we went back out to the dock. 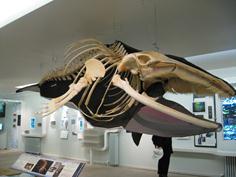 Our boat, Sylvía, was an old wooden fishing boat which had been renovated for whale-watching. It could carry 45 passengers but it didn’t quite have that many on board today. Upon boarding we were all given padded overalls to keep us warm. We thought we were already warmly dressed but as it turned out it was handy we had them.

Despite Húsavík being in beautiful sunshine, the bay was shrouded with a low layer of clouds coming off the mountains on the other side. But off we went across the bay, wondering whether we would see any whales. We spent an hour puttering across the bay, seeing nothing but puffins, before we spotted a humpback whale.

Zeroing in on it, we were given quite a show, as there were actually two whales feeding, so they surfaced very regularly. They would come up, take one breath, and immediately dive again, sometimes right next to our boat. We watched them for about 45 minutes, but then it was time to head back to port.

Christine wanted to see more of the Whale Museum, so while she did that Neil, Rosemary, and Paul went and tracked down the local bakery. This was surprisingly difficult to do, but finally we found it. Neil bought sandwiches and headed back to the museum, and the two of us bought pizza slices, pastries, and tea and coffee, and ate them at a table in the bakery. After lunch we went back to the craft shop by the docks, where Rosemary had bought an Icelandic sweater earlier in the day. This shop was supplied by local handcrafters; not only did they have knitted items but also woven placemats, painted rocks, and wooden carvings. Paul bought a hand-painted rock depicting a snipe.

After meeting up with Neil and Christine, we were on the road again. Our route took us north, around the peninsula where we stopped a couple of times to admire the view before turning in to Ásbyrgi to look at the visitor centre for the Jökulsárgljúfur national park. Here we bought a copy of the park map. Then we drove down the valley, which according to legend was formed when Odin’s eight-legged horse Sleipnir stepped here. We were looking for the trail to the Eyjan rock.

It took us a while to find it, and in the meantime Christine and Neil had headed off in the opposite direction to follow the trail to the lake at the end of the valley. When we finally did find the trail, it just meandered through the birches and heather. Eventually it did sort of pass by the rock, but we hadn’t realized that we had driven right past the rock already. So that trail was pretty much a waste of time. Then on Christine and Neil’s recommendation, we made a quick trip up to the end of the valley. By climbing up the hillside at the end of the lake, we got a much better view of the valley. That was a rather frustrating experience.

But onwards to the waterfalls. Back on the road again, we turned south onto Highway 864. The main feature of the park is the big Jökulsá á Fjöllum river which flows down from one of the highland glaciers, pouring over several waterfalls. The first waterfall stop on this highway was Hafragilsfoss, one of the lesser falls in the park, although it was quite spectacular in its own right. 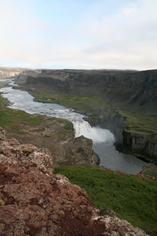 From five kilometres away we could already see spray from the biggest of the falls, Dettifoss.

This one really was beautiful and large. According to the sign it had the highest volume of water going over it per second of any waterfall in Europe. (Although Neil and Paul wondered why that same volume of water wouldn’t go over the other falls downstream of it.) Fortunately the spray was being blown towards the far bank, or we would have been very wet. There seemed to be so much spray that it formed more little rivers running down the canyon wall. 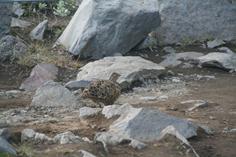 It was now 9 pm, so we decided to have dinner. Sandwiches and tea were on the menu. Then leaving Dettifoss, we continued down the road which ran across the lava plain. Soon we reached the ring road, and turned east towards Mývatn. Crossing the lava plain we noticed a line of cairns paralleling the ring road; originally they were put there to help travellers find their way, and recently they are being rebuilt by volunteers. It wasn’t that late, it wasn’t even 10 pm yet, so when we got nearer to Reykjahlið we decided to make a side trip up to the volcanic area at Krafla.

This is a very active thermal area. We drove up past a stream of boiling water, then past a geothermal power plant. Above that it looked there was another plant under construction, and above that we found a parking area. Off in the distance we could see clouds of steam and smoke rising, so we set off across the field towards them. The first thing we came to was a large hot pool which was boiling at one end. All around were fumaroles and steam vents.

In some places moss could grow, and in other places sulphur was crystallizing out of the smoke. The different volcanic rocks were amazing. We spent almost two hours following the boardwalks and paths through this strange area.

It was amazing how light it was at midnight. We watched the sun setting slowly, slowly, towards a flat mountain in the northwest. But instead of setting, the sun went to the right and missed the mountain entirely. But now it was definitely late. We headed back to Reykjahlið, arriving back there at 1 am, and crashed into bed. 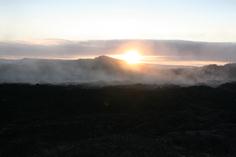