Breakfast was at 8 am again today, and after that we climbed into the boat for today’s expedition. We carried on along the old Danube channel, and then turned off along a side channel. Once again we stopped or slowed down along the way to look at birds, and at about 11:15 am we arrived at the small village of Letea. 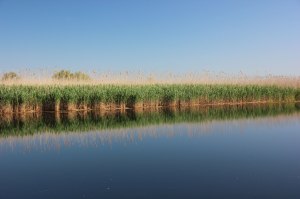 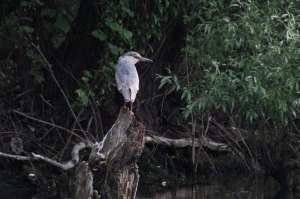 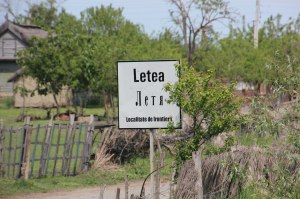 The people of Letea speak Russian as their first language, and the children learn Romanian in school. The village school has only primary grades, so once old enough the children move to Tulcea to attend high school. Some of the villagers still live by small-scale agriculture, as we saw, but now tourism brings income to the village. We were met by a driver who had a truck with seats in the back, like an African safari vehicle, and he drove us up to the Letea Forest. The forest reserve was set up in 1938 to preserve the biodiversity of the area, the first such reserve in Romania. 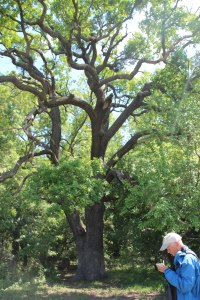 Some of the large oak trees in the forest are between 400 and 700 years old, and in the forest there is also a herd of wild horses. Apparently the horses have been living there in a wild state since at least the 19th century. We took a short walk in the forest, finding a Collared Flycatcher in the upper branches of one of the old oak trees, and then we were driven to the far end of the reserve. This took about half an hour. 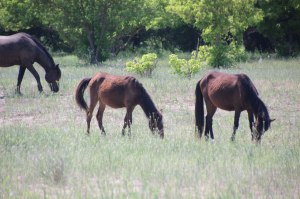 At this end of the reserve there were large sand dunes, and to access them we walked through the forest over a newly-built boardwalk. (The boardwalk was necessary because that part of the forest was flooded at this time of year.) The sand dunes were quite amazing. We wandered around the dunes for quite a while in the hot sun, hoping to see one of the local dune lizards, but no such luck. Neither did we find any steppe vipers! But we did find fire-bellied toads in the flooded forest. 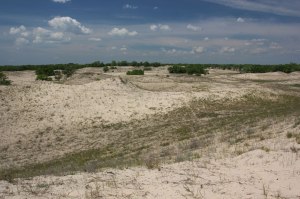 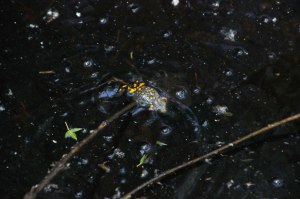 Fire-bellied toad (on its back)

Back at the boat it was now 2:30 pm and we still hadn’t had lunch, so that was our next priority. Once we were underway Florin got out the lunch and we ate while Dan drove the boat. The ride back to Crișan went reasonably quickly and we were in our room by 6 pm. Just after we got there a big freight ship went through the channel at high speed, which was a very scary sight! Dinner tonight was chicken, a welcome change from the fish we’d been having. Dessert was crepes with cherry jam, which the Romanians call “clătite”.

Breakfast was early this morning, at 7:30 am, because we would be going against the current on our way back to Tulcea. So our departure from Pensiunea Eden was at 8 am, and our route back to Tulcea was the same route we had followed to get here, with a slight diversion to take in an agricultural area. The day was a bit more overcast than yesterday, but still very pleasant. Travelling along the channels is a very nice way to go birding. Most of the birds we saw were pretty much the same as before, with Squacco Herons flying ahead of us and cormorants diving in the channel and Night-Herons flying over. Although we did see a brilliant Yellow Wagtail on the bank and there were large flocks of pelicans flying overhead. 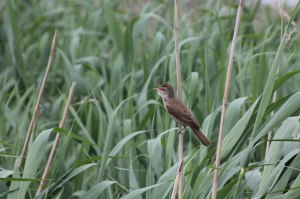 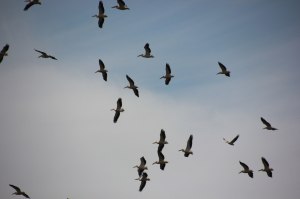 Our diversion was to the Stipoc levee. The first thing we saw was a collection of derelict buildings which looked like a prison, but Florin told us that it used to be a fish farm. The levee now enclosed a dry area, so there were birds like shrikes and pheasants there. Apart from that we motored all day, having lunch on the go as well. However we made a diversion to deliver some tools to a man fixing his engine and stopped at a fishing camp so that Dan could buy some fish. 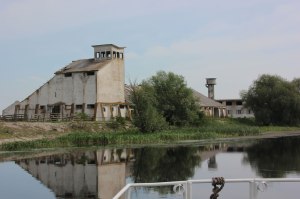 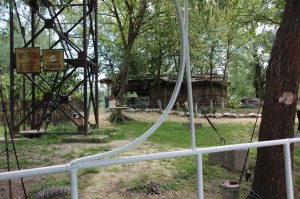 And then just as we were nearing Tulcea we were stopped by a Border Police boat. They asked for our passports and wrote down some information in a notebook, and also looked at the paperwork for the boat. Fortunately they didn’t ask about Dan’s fish, because it had been illegally caught! After that it didn’t take us long to get back to the dock at Tulcea. 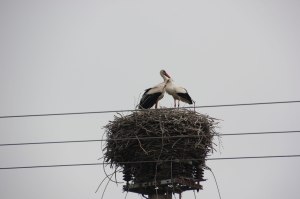 Once back at the Ibis Tours guesthouse we went for a walk down to the Tulcea waterfront. There were a lot of boats advertising Delta tours, along with one of those very long barges which do European river tours. We managed to find our way back without getting lost, too. Dinner tonight was chicken, which was quite tasty.