During the night it had rained, but looking out the skies looked promising. Today we were hoping to check off some Wainwrights by climbing some or all of the Langdale Pikes. After breakfast we loaded our day packs and walked back to New Dungeon Ghyll, where our trail started. 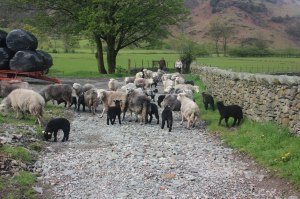 The first part of our hike was to climb to Stickle Tarn. The trail from New Dungeon Ghyll went straight up Stickle Ghyll, climbing almost 400 meters in one go. Fortunately it took us less than an hour to reach the tarn. But we saw with dismay that the clouds had come halfway down the face of Pavey Ark. So we decided to sit there and have some tea while waiting for the clouds to clear.

While we were sitting there we noticed a sheep herder and his dog rounding up a flock of sheep from the fells. In only a few minutes the dog had gathered a group of a few dozen sheep, who all ran through the stream in front of us. It was interesting to see how the man and the dog worked together—the man yelled and whistled commands to the dog, who in turn herded the sheep in the direction they were supposed to go. We noticed also that sheep don’t like getting their feet wet while crossing streams any more than we do.

After the sheep had passed us we packed up our flasks and headed across the rocks onto the trail which would take us up Pavey Ark, the massive cliffy mountain beside Stickle Tarn. There are three routes up, and we opted for the one involving neither rock climbing nor scrambling. According to the Ordnance Survey this route would take us up the Bright Beck valley and then around the back of Pavey Ark. In reality, though, on the ground there was no actual trail. The ground was very boggy in places, so we had to choose our way carefully.

We stopped about half way up and settled down in a dry spot, where we enjoyed our lunch of bacon butties, Grasmere gingerbread, and tea. From there we headed up into a boggy moorland in the clouds with no landmarks. But with the help of the map and the GPS and the compass we managed to find a cairn which was on our map. Here was the trail coming up the regular route, along with three walkers and two fell-runners and a dog, so we were happy about that. We decided the high point just behind the cairn was the top of Pavey Ark, that was good enough for us.

There were lots more peaks nearby to be climbed, but we couldn’t see any of them. Nor could we find any clear paths in the area. So we followed our GPS track back to the route we had taken on the way up. This proved quite easy and before long we were back at Bright Beck. We followed it back past a couple of tents which we had passed on the way up. This time the sheep herders were there making their tea. One sheep dog came out to see us and seemed intent on herding Rosemary.

Before long we were back at Stickle Tarn, heading back down to Dungeon Ghyll. (This Wainwright-bagging is obviously harder than it looks!) It was after 3 pm, so we stopped at the hotel for an early dinner—sandwiches and chips, very good and filling—rather than walking to the B&B and then having to walk back here again for dinner. While there a group of three Canadian girls who we had met while sitting at Stickle Tarn came by. They had apparently gone up the regular scrambling route and then tried to come down the Bright Beck route. They had a map, and a compass, and they had tried to follow compass bearings, but they all agreed that they had been lost. But fortunately only temporarily. 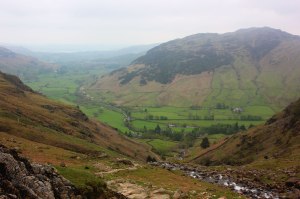 We could actually see a fair bit of blue sky this morning, so the day looked promising. But on the other hand there were still some clouds down over the fells, so we planned a walk at lower elevations. For some reason it took longer than usual to get going, so by the time we walked down the driveway it was nearly 10:30 am.

We started out by walking along the bridleway to the New Dungeon Ghyll hotel, then carried on a bit farther to the Old Dungeon Ghyll hotel. This is basically the upper end of Great Langdale—the road ends here, the bus turns around here, and beyond are only a few farms. From here we walked along a waymarked footpath up the hill to Blea Tarn, a pretty little lake with a forest at one side. By now the sky was almost completely blue and the sun was warm. It was such a change from our previous day’s walk.

But now the climbing began. We walked a short distance along the road to a small beck where there was a path leading up to Lingmoor Fell. It was one of those paths which goes up the slope single-mindedly until it reaches its destination. Our views were getting better and better the higher we climbed. We passed a couple of stone walls and finally climbed a stile to get to the top of Brown How, the highest part of Lingmoor Fell.

We sat on the top and ate our lunch, and were surprised to find that we were looking directly down the hill and across the valley to Robinson Place Farm. After lunch we headed along the ridge and down past the slate quarry into Elterwater. When we had come by the quarry earlier it was Sunday, but today was Tuesday and the machinery was crashing away. As we continued along the shore of Elterwater the sun was shining as we passed lots of walkers.

From here we climbed a narrow path up to the road, where we had to climb over a stone wall, and then worked our way up along paths and minor roads to the foot of Loughrigg Fell. Our map-reading skills were improving, so all of that worked out perfectly. We recognized where we were, having been here on the day we arrived in the Lake District. But back then we had just walked around the fell and not over the top. Today we climbed to the top, again by a path which led straight up the hill. Some sections of the path were really good, as they were made out of stones placed the perfect step distance apart, but other sections had you slogging steeply up over grass.

Finally we reached the top, with a great view over Grasmere and Windermere. But we didn’t pause there for long because it was already after 3 pm. Our destination, once again, was the Grasmere gingerbread shop. So down the other side we went, down to Loughrigg Terrace by the lake. We had been here before, too, but now there was an immense field of bluebells here. It was amazing what a difference ten days made—the flowers were much more open and you could smell their scent. Grasmere was a lot busier than it had been ten days ago, too. We bought chocolate lollipops there, which were just the thing to take the edge off our hunger. 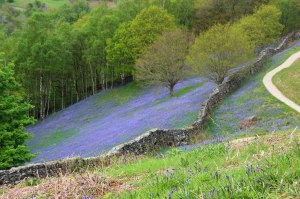 After some discussion we decided not to have dinner in Grasmere, but to head back towards the B&B. Using the GPS we navigated our way out of the village (the road around the lake actually goes out the back of a car park) and then we followed the public right-of-way over the little ridge towards Elterwater. The views back towards Grasmere were very lovely as it was getting later in the afternoon. The path was surprisingly short and it wasn’t long before we made the descent into Elterwater. 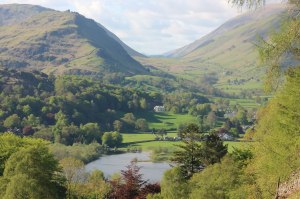 The others staying at the B&B had been raving about the lamb shank at the Wainwright’s Inn in Chapel Stile, so we decided to stop there and have that. And they were right to rave about it. With the mint red wine gravy it was wonderful, as was the evening as we sat at the table outside.

From there it didn’t take long to get back to the B&B, but it was after 8 pm and the sun was about to set over the Langdale Pikes. It had been a long (28.5 kilometers with 1400 meters ascent) but successful day. 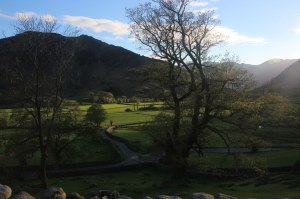