We return to Slovakia

Today we were on our way back to Slovakia. Outside the weather was still a bit cloudy, but very soon the clouds were replaced by blue sky. We went down to breakfast at 7:30 am and this time we had scrambled eggs with ham plus yogurt, bread, jam, and tea. These eggs were really good, not too greasy or salty.

Back at the room we packed our bags, then went down to pay our bill. It took a while to get all the charges straight, but in the end we paid in cash. We walked down the cobbled road to Kuźnice with the Scottish woman from the Exodus tour. She was off to town while the rest of her tour group was off doing some strenuous hiking. We left her at the line-up for the Kasprowy Wierch cable car, and got on the bus to the Zakopane bus station. From there we just missed one bus going to Morskie Oko, but the next one in line left shortly afterwards. It was full when it started and picked up several passengers en route, so it was jammed full. 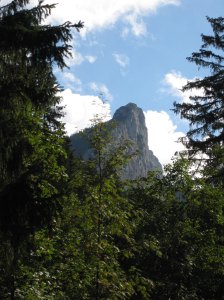 At Łysa Polana we extricated ourselves and our packs from the bus and, after paying the driver, had less than 20 złoty left. We walked through the abandoned border control station and across the narrow bridge over the Biełka River into Slovakia. Down the road a bit was a bus stop, where several people were waiting. Luckily for us the bus was due to leave fairly soon, so instead of walking the two kilometres along the road to Tatranská Javorina, we waited for about fifteen minutes and paid 20 SK for the short ride.

Our trail head was very easy to find, so off we went following a gently rising grade on a paved road leading into the forest. The route was really pleasant to walk along. At the Pod Muraňom junction there was a work crew with heavy equipment building a new bridge over the Javorinka, but luckily the pedestrian bridge was still available. Just up from there was a new display of rocks found in the White Tatras. It was the first of several interpretive sites on this trail. This one was only in Slovak, but the rest of them were new and had fairly good English translations.

After that the trail went past a spring, where there was an interpretive sign telling us about the limestone fissures where the spring formed. Then it turned uphill to follow Međodolsky potok (Coppermine Creek) through the Bránka (Little Gate) canyon, where there was an interpretive sign telling us about the canyon’s vertical plates of limestone, including a poem by Hviezdoslav. The trail was in really good shape and the grade very pleasant, so we made good time. Soon after noon we stopped at a lovely picnic site with two covered tables and wooden carved sculptures of a standing bear and a cub. The interpretive sign told us that this was the start of the meadows, where bears were to be found. The story was told in first person, from the bear’s perspective.

Climbing up the still well-graded path, we passed a cross commemorating the end of a 150-year battle over who owned the meadows in the 16th century, and then a sign displaying the local wildflowers. It being September, most of the flowers were finished, but the gentians were still blooming in large numbers. We were surprised at how quickly we were climbing up the trail. We could see we were approaching a pass, but could it be Kopské sedlo so soon? Surely there would be more climbing to come? But no, it was really Kopské sedlo (Stack Pass). According to our guide book there were to have been some steep sections, but compared to the trails we had been on in Poland, this was nothing by comparison.

Both of us were really pleased at the ease with which we ascended the pass, because from there it was all downhill. We trotted down to Veľke Biele pleso (Big White Lake) in a mere 15 minutes. From there the path was a bit rockier, but we arrived at Zelené pleso (Green Lake) by 3 pm.

The hut was situated right at the edge of the lake. We signed in and were directed to our room, which had eight new IKEA-style bunk beds. We settled in and chose our beds, both lower bunks because we were early enough. Then we went outside to look around. Not much to see inside the hut; restaurant at one end, toilets and showers at the other. Rosemary went to have a shower and Paul took the maps to the restaurant. We had planned to stay two nights at this hut, so we needed an itinerary for tomorrow’s “rest day”. 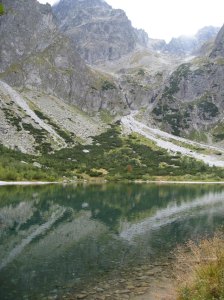 Our dinners and breakfasts were included in the price, so that meant fixed times and fixed menus. Promptly at 6 pm we were served a delicious bean and sausage soup. The main course was a slice of pork with large macaroni noodles and a very good sauce. We also had a jug of spiced tea to drink. Very filling. Breakfast is scheduled for 7 am, so tomorrow we will get an early start to the day, whether we want it or not. Hopefully the weather will be good.